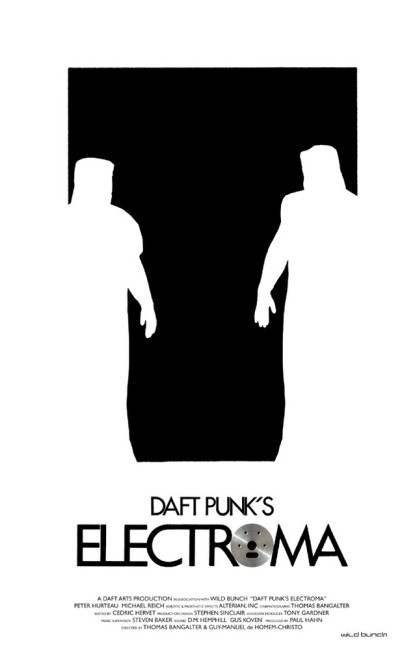 Two robots drive along the California highway until they come to a town inhabited by other robots. They undergo an operation whereby technicians give them human-like faces. This is a source of curiosity to the townspeople. However, when the faces start to melt in the sun, they are pursued by a mob. They then undergo a long walk into the desert.

Daft Punk is a French band that consists of Thomas Bangalter and Guy-Manuel de Homen-Christo who have been friends since high school. Bangalter and de Homem-Christo had previously appeared together in the band Darlin’ and put out several songs (but no albums) during the early 1990s before disbanding. A review by the British magazine Melody Maker that called their music “daft punk” became the inspiration for the name of their new electronic music band, which they launched in 1994. With the release of their first two albums, Homework (1997) and Discovery (2001), Daft Punk became an international dancefloor sensation. The duo also created the soundtrack for Tron Legacy (2010) and Bangalter on his own the music for Gaspar Noe’s Irreversible (2002) and Enter the Void (2009).

Daft Punk regularly play with science-fiction concepts and ideas. Bangalter and de Homem-Christo are celebrity averse and one of the central motifs of the band is that they always hide their faces behind masks, even when performing live or conducting interviews. To this extent, the duo have had robot-like masks – the likenesses of which are worn by the two central characters in the film – constructed by US makeup effects studio Alterian Inc and wear them during promotion and performances. The two robot characters were central to the previous Daft Punk film, the animated Interstella 5555 (2003), which set a space opera to the band’s music.

With Electroma, Bangalter and de Homem-Christo step behind the camera as directors and writers, with Bangalter also acting as the cinematographer. (The duo had previously directed video clips for their songs – indeed, Electroma originally started out as a music video for their hit song Human After All). While it should be noted that Electroma is a Daft Punk film and comes under their Daft Arts production company banner, the two robot characters we see in the film are not played by Bangalter and de Homem-Christo but two other band members Peter Hurteau and Michael Reich. Moreover, the soundtrack is not from Daft Punk but is comprised of tracks from artists such as Brian Eno, Todd Rundgren, Curtis Mayfield and others.

Electroma intrigues for a time. The image of the two robots getting into a regular car with California plates in the midst of the desert and driving off down the highway is immediately an unusual one. Although when it comes to seeing that the car’s license plate spells ‘Human’, Electroma seems to be setting itself up for being one gigantic student film filled with crashingly amateurish science-fiction symbolism. One is at least prepared to give Bangalter and de Homem-Christo the benefit of the doubt.

The unusualness of the film continues with the arrival at the town, which is a regular smalltown American setting – but for the fact that everybody has robot face masks. We have robot posties and farmers, robots standing in the street reading the newspaper, even robot mothers pushing robot babies in strollers or robot children on swings in a playground, and a robot wedding ceremony. It is puzzling but the surreal contrast of the visuals is often striking.

The two robots then visit a laboratory where they are given human-like facial appliances over the top of their mechanoid visors. The laboratory scenes are the most visually striking in the film – where everything takes place in a pure white on white room with even the technicians dressed in all white and the only break in the blinding colour scheme being the two robots, the doorway and some of the equipment. Outfitted with their oversized ungainly human faces, the two robots move through the town where they get strange stares, only for the faces to start melting in the sun and they suddenly become pursued by a mob.

Stripping the faces, they make it free and walk out into the desert as robots again. After much walking, one robot cannot stand it and silently communicates with his companion to trigger the self-destruct switch in his back and is blown up. The other walks on but eventually decides to self-destruct too but finds he cannot reach the switch in his back and so breaks the visor of his face mask and use it as a magnifying glass to set himself alight. The last image of the film is the burning robot walking off into the night desert.

The most frustrating thing about Electroma is that you have no real clue what it is about. There is no dialogue – outside of the musical interludes, the scenes where the characters communicate are denoted by spells of silence on the soundtrack. I was unable to fathom what metaphors that Bangalter and de Homem-Christo were making about robots and humanity. It is a film that regards science-fiction as allegory and surrealism, not one that sets out to logically create a world in which the characters live, as you would expect a science-fiction film to do – the robot town is simply an analogue of a regular small town where the robots do things that are very humano-centric but logically make no sense for robots ie. they have toilets, eat ice cream cones, conduct wedding ceremonies.

What this makes Electroma into is a 75-minute long student film – all surreal visuals straining for profundity and coming out a jumble of amateurish ideas and vacuous abstractions. Dramatically, not very much happens at all and why it does seems a concept Bangalter and de Homem-Christo are disinterested in. One critic hit it on the head when they compared Electroma to Vincent Gallo’s widely ridiculed The Brown Bunny (2003) – when it comes to the long scenes with the two robots walking out into the desert that go on and on, the comparison seems to be exactly on the ball, for what we have is precisely a science-fictional Brown Bunny.