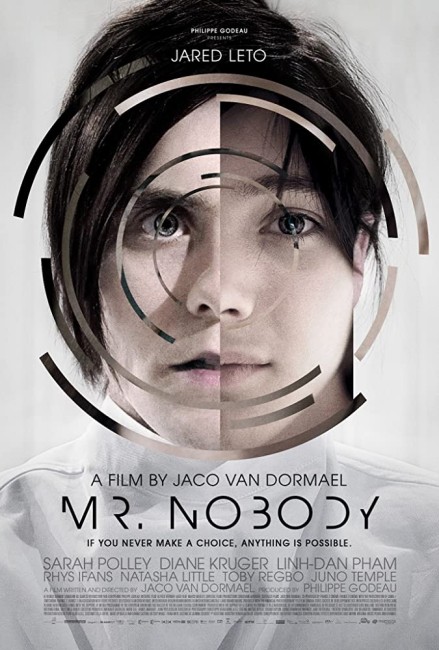 It is the year 2092. The world of the future watches with fascination the last days of the oldest person alive, the 120 year-old man known only as Nemo Nobody, as he waits on his deathbed. A young journalist sneaks into interview Nemo. In telling his story, Nemo remembers back to the crucial point when he was caught between his mother and father breaking up and how he could not decide whether to stay behind with his father or jump aboard a train with his mother. The self that jumped aboard the train followed his mother as she took up with and married another man, Henry. At age fifteen, Nemo fell deeply in love with his stepsister Anna, only for them to be split apart. The self that stayed behind ended up tending his father and falling for Elise, a girl he met at a dance. Nemo married her and became a tv presenter, only for her to become affected by mental illness. At various points throughout his life, Nemo unmade crucial decisions and diverted along alternate pathways wherein he became a science-fiction writer and married Jeanne, others where he died in accidents. The journalist cannot understand how Nemo can have lived multiple lives. Nemo then tells him that at the moment he dies, all time in the universe is going to run backwards.

Mr. Nobody was the fourth feature film from Belgian writer-director Jaco Van Dormael, previously known for films such as Toto the Hero (1991), Lumiere and Company (1995) and The Eighth Day (1996). It comes produced by so many international companies that its credits seem like the guest list for a business summit meeting. Mr. Nobody gained substantial arthouse and festival play – indeed, its release schedule runs like a list of international film festivals.

Mr. Nobody was sold as a science-fiction film, even if this is somewhat deceptive. The film expends much effort in creating a densely colourful picture of the future – futuristic cityscapes stretching out, glassed monorail tubes with tv broadcast around the glass, people that walk through the background encased in plastic bubbles, Jared Leto’s psychiatrist (Allan Corduner) with a tattooed face. Later we journey to Mars aboard a spaceship filled with cryogenic sleepers and venture out onto the Martian surface where both have been envisioned with a great deal of credible technical detail.

The odd thing about these science-fiction elements is that while the promotion focuses on them, they are not what the film is about (even though it otherwise falls well within genre confines). The future scenes are only a narrated wraparound that takes us back through Jared Leto’s life, while the Martian scenes are merely a science-fiction novel that he is writing in one of the minor alternate timelines. You could remove the future and Martian scenes and it make little difference to the story.

Eventually, Mr. Nobody reveals itself as something much more mundane. It is a scenario akin to films like Run Lola Run (1998), Sliding Doors (1998) or The Butterfly Effect (2004) that follows the protagonist through different diverging timelines according to a choice that was made one way or another. Unlike these other films, which clearly delineate the difference in the alternate pathways, Mr. Nobody is constantly creating multiple branches within each divergence such that one soon becomes lost as to which thread they are in at any one point. Maybe more than any of these, one is reminded of Providence (1977), which similarly had an old man telling a story and changing aspects within it at whim.

The problem with Mr. Nobody is that Jaco Van Dormael stretches for epic ideas. The film is filled with huge concepts taken from physics – with Jared Leto even giving lectures about the Butterfly Effect, string theory, chaos theory, entropy, the Big Crunch, Schroedinger’s Cat – and ideas from psychology on innate behaviour or the science of attraction. Yet for all that, Van Dormael only seems to have a surface idea of what many of these ideas are. String theory and the essence of Schroedinger’s Cat (even though such is not mentioned) are made into an argument for the many-worlds theory (in actuality, Schroedinger’s Cat is nothing more than a thought experiment to illustrate the absurdity of quantum wave functions). What we have seems to be a glib artist’s fancy that latches onto ideas with little attention to the substance of such concepts.

More so than that, Mr. Nobody seems filled with far too many ideas for its own good. There is a scene where Jaco Van Dormael pulls back to let Jared Leto look behind the curtain of reality and see that the city streets around him are a giant facade, with visions of helicopters winching blocks of seawater into place to form the ocean, while later we see workmen rolling giant strips of roading into place. It is a fascinating Philip K. Dickian idea but what it means, what relevance it has to the story is unclear as it is never mentioned again. Elsewhere at one point, we have a brief version of the scenario being played out by cave-people.

Other pieces don’t make sense – like Jared Leto finding a video messages from his aged future self, made on the theory that time is turning backwards and his future self knows exactly what is happening at this moment. Daniel Mays’ journalist rightly asks the question of how one man can have multiple conflicting and contradictory views of what happened in his own life, but again there is no answer to such a perfectly reasonable question.

The only answer that we seem to get is the ridiculous one that everything seems to be dreamed up by a five-year-old boy caught between decisions on a train platform, although how a young boy has the imagination let alone the emotional complexity to dream up such complicated scenarios of adult life is probably one of the film’s least plausible aspects.

Mr. Nobody works well in places, especially when it comes to the scenes depicting the love story between the teenage hero and his stepsister. If nothing else, you do have to credit Jaco Van Dormael for the vast conceptual ambition of his ideas, if not exactly for his coherence at presenting them on screen.

Jaco Van Dormael subsequently went onto make The Brand New Testament (2015), which reveals that God is alive and well in Brussels.