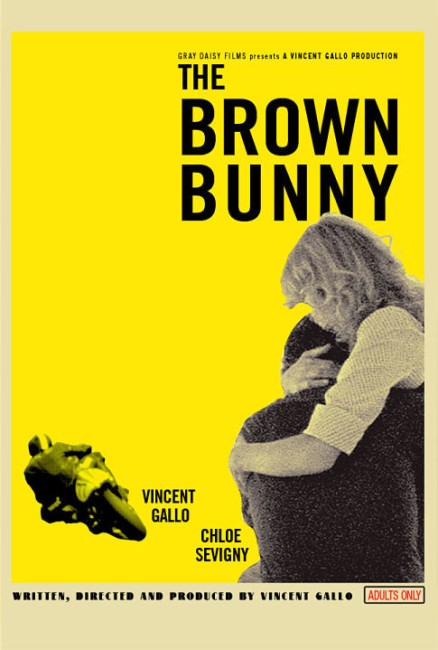 Bud Clay is a motocross rider who travels all across the US to various track competitions. Bud misses his former girlfriend Daisy Lemon and feels deep hurt for her. During his travels, he meets and is attracted to various women but changes his mind and walks away from any liaison with them. Arriving in Los Angeles, Bud seeks to track down and meet up with Daisy again.

Vincent Gallo is an interestingly controversial figure. Gallo started as a painter and model, before breaking into film as an actor, playing roles in films like Arizona Dream (1993), The House of the Spirits (1993), Palookaville (1995), The Funeral (1995), Freeway II: Confessions of a Trickbaby (1999) and Tetro (2009). Equally as much, Gallo has a reputation for clashing with his directors, something that has probably prevented him obtaining more high profile roles than he has. Acting as director, writer, composer and lead actor, Gallo then made Buffalo ’66 (1998) in which he plays a just-released convict who kidnaps Christina Ricci to pretend she is his girlfriend as he goes to see his parents. The film gained widespread acclaim as an arthouse release. With the impetus of Buffalo ’66 behind him, Vincent Gallo then made The Brown Bunny, financing the entire film and performing most of the duties behind the camera himself. He would subsequently direct Promises Written in Water (2010) in the same manner, although this has not been widely seen.

The Brown Bunny will always been overshadowed by the notoriety and controversies that surround it. Audiences booed its premiere at Cannes and the film was almost universally trashed by critics. When it received a theatrical release in altered form in the US in 2004, a storm of controversy accrued over the notorious final scene where Chloe Sevigny performs oral sex on Vincent Gallo on camera. The film’s promotional campaign played on the controversy but this had an adverse effect when complaints forced distributors to remove billboards that featured this. This controversy even had Chloe Sevigny dumped by her agent.

There was also the rather funny slagging match between Vincent Gallo and Roger Ebert. Ebert went so far as to call The Brown Bunny “the worst film in the history of Cannes,” to which Gallo responded calling Ebert “a fat pig with the physique of a slave trader.” Ebert retorted, “one day I will be thin, but Vincent Gallo will always be the director of The Brown Bunny.” Gallo is reported to have placed a curse on Ebert’s colon, only for Ebert to then be diagnosed with cancer to which Ebert responded by stating that “even my colonoscopy was more entertaining than the film”. The two eventually settled their differences with Ebert even going so far as to write a positive review of the re-edited version of The Brown Bunny. Gallo subsequently claimed that journalists had blown up the entire dispute.

It should be noted the version of The Brown Bunny seen in general release (and reviewed here) is some 26 minutes shorter than the version that was booed at Cannes. This differs in regard to Gallo’s elimination or shortening of a number of scenes. As far as one can ascertain without having the original to compare to, these include the removing of some five minutes of the racing track scenes at the start; a long fade to black at the end of the film where Vincent Gallo’s character would have killed himself; shortening of the motel sequence; and removing some eight minutes of driving scenes. That said, the cut version seen by the rest of the world still seems to have accrued just as bad reviews as the booed Cannes version.

Even in its condensed form, The Brown Bunny is an unbelievably indulgent film – and this is the opinion of a reviewer who has sat through most of the works of Andrei Tarkovsky who was notorious for shots that went on for ten minutes at a time. It is as though Vincent Gallo has determined to push an audience’s tolerance to an absolute limit. Almost nothing happens throughout the film. The first five minutes consists solely of scenes of motorcycles racing around a track. A good half of the film probably consists of footage of American highways and countryside shot out of the window of Vincent Gallo’s van. While initially interesting, these scenes go on and on well beyond the point that Gallo has surely communicated to us that his character leads a tedium-inducing life on the road. Indeed, you almost start to wonder if Vincent Gallo is not attempting to conduct a remake of Werner Herzog’s Fata Morgana (1971), a film that was shot entirely shot from a truck driving through the Sahara desert.

To Vincent Gallo’s credit, he is attempting to create a level of realism in the film – the interactions with the other characters have the effect of really being there, rather than being shot with standard dramatic Hollywood pacing. However, he also includes a level of detail about the mundane and inconsequential to a point of tedium. In the middle of the film, for instance, there is a long scene where none of the detail has been cut as Gallo stops in the middle of the Utah salt flats and we watch as unpacks his motorcycle from his van and then drives off all the way to the horizon. If one took out all the driving scenes, most of the incident that occurs could be compacted down to around twenty minutes of running time. Indeed, one suspects that did The Brown Bunny not come with the controversy of the blowjob scene, it is a film that would never have been granted a release at all.

That is not to say that what Vincent Gallo is trying to do with The Brown Bunny is uninteresting. One of the most strangely intriguing aspects is his character’s encounters with various women – he pleads with and persuades a convenience store girl (Anna Vareschi) to come to California with him, only to drive off on her when she stops by her house to pack her bags; there is a silent encounter with a woman (Cheryl Tiegs) that he walks up to at a roadside rest stop, empathises with her suffering and then starts to kiss her before he breaks down and abruptly leaves; or where he picks up a prostitute (Elizabeth Blake), buys her takeaways but then is unable to go through with doing anything and drops her off. These scenes are interesting, especially in that Vincent Gallo’s character seems to be able to empathise with and hold some hypnotic power over these women without saying much to them at all. At the same time as this, Bud remains completely murky to us as a character. There are a great many closeups shots of Vincent Gallo’s face as he drives but what goes on behind those sunglasses is something that we are never granted privy to and the constant opaqueness of the film becomes frustrating.

The most interesting part of the film is the completely left field ending. Almost everybody ended up being either turned on, outraged or left indifferent by the long (and probably wholly gratuitous) scene with Chloe Sevigny giving Vincent Gallo a blowjob. The controversy around the scene tended to eclipse the bizarre twist that comes immediately after. Indeed, I was not even expecting to review The Brown Bunny as a genre film until this popped up. [PLOT SPOILERS]. After having sex, Gallo and Chloe Sevigny sit back and discuss what happened that led to their split up where she suddenly, casually announces “I’m dead, Bud.” It is in this moment that we suddenly realise that the flashbacks to their split up where he believes he walked in on her with other guys was really a scene where she was being gang raped and that after he left she choked to death. Certainly, it is here that The Brown Bunny, after some 80 minutes of driving scenes, suddenly becomes interesting.