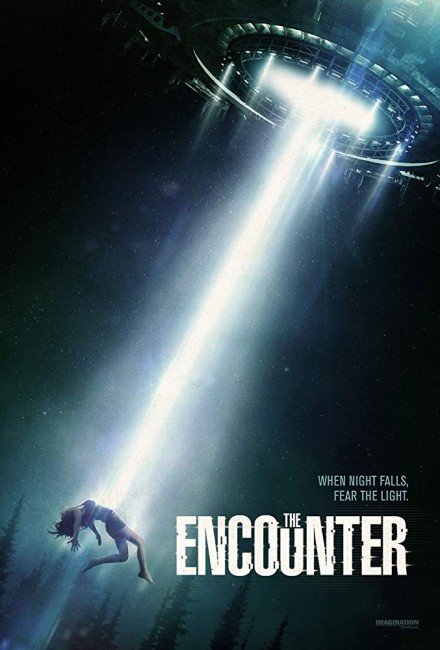 Park ranger Alice Sumner goes out to investigate the site of a meteorite impact only to discover that a UFO has crashed. After touching the debris, she comes away infected. Unable to drive or radio out for help, she videos herself as she starts to succumb to infection. Elsewhere, a group of four friends go camping in the woods. At the same time, Trevor and his aging friend Duncan have gone hunting in the area. As they film themselves, both groups encounter alien creatures.

The Encounter was the third film for director Robert Conway who had premiered with the Western Redemption: A Mile from Hell (2009) and then found the horror genre with Exit to Hell (2013). Subsequently, Conway made Krampus: The Reckoning (2015), its sequel Krampus Unleashed (2016), the ghost story The Covenant (2017) and the ultra-violent Western Eminence Hill (2019).

Even the venue that The Encounter ventures into with various parties on a hike into the backwoods has become a well and truly overused one since the film that essentially created the Found Footage movement – The Blair Witch Project (1999). Indeed, The Encounter could be Blair Witch but with aliens substituted for mysterious supernatural happenings.

As such, it is a case of “seen one Found Footage film, seen them all.” All the moves feel predictable and played out. Robert Conway gets one or two jumps out of green glowing alien figures attacking people unexpectedly but mostly not. We do get the appearance of a crashed UFO in one scene and one seen flying overhead right at the very end.

Mostly, this is a UFO film that has been pitched in terms of its horror element. We get several makeup effects – a cheap and unconvincing one where we see Eliza Kiss becoming infected in front of the camera; and a much better scene where the party come across a victim with a blue-glowing orb planted in their chest.