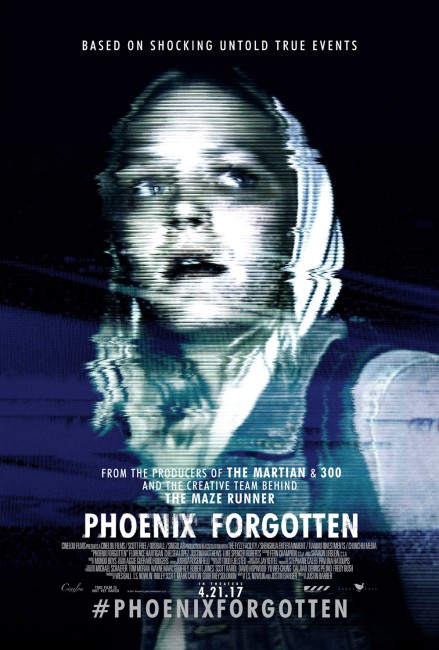 Sophie Bishop returns to visit her family in Phoenix, Arizona. She has a video camera and is determined to investigate what happened to her brother Josh who disappeared in 1997. In March of that year, while at Sophie’s sixth birthday party, Josh recorded the appearance of a series of lights in the sky with his video camera, an unexplained phenomenon seen by many people that came to be known as the Phoenix Lights. Josh and Ashley Foster, a girl he was keen on, and another friend Mark traced other appearances of the lights to an area in the desert and went out in search of them but failed to return. After an extensive search by authorities, their vehicle was found but all trace of them had vanished. As Sophie now digs into what happened, she uncovers a forgotten videotape that reveals what happened.

The Phoenix Lights was a true-life mass UFO sighting that occurred on March 13, 1997. Over the skies of Phoenix and as far away as Tucson and neighbouring New Mexico state, hundreds of observers, including some with videocameras, saw lights in the sky. At 7:30 pm, a triangular configuration of five lights was seen moving through the skies. The more widely seen and filmed incident occurred around 10 pm where thousands of people saw about six lights moving through the sky in a V-shaped formation. The Air Force later made claim that these were simply aerial flares but UFO believers have poured scepticism on this, claiming it is unlikely that flares could remain in the same configuration for hundreds of miles. The Phoenix Lights has been one of the most widely documented UFO phenomena. It has been the basis of a number of other films, including Night Skies (2007) and Alien Encounter (2008), as well as one other Found Footage film The Phoenix Incident (2015).

Phoenix Forgotten is the directorial debut of Justin Barber who had previously made one short film and had a handful of assorted credits as a graphic designer. The surprise about Phoenix Forgotten is that it comes backed from some reasonable names – co-produced by Ridley Scott and his Scott Free production company; co-produced by Wes Ball, the director of The Maze Runner films, along with director/producer Courtney Solomon and high-profile producer Mark Canton. The $2.8 million budget comes from places as diverse as the UK and China. The film received a theatrical release, although only earned back only a miserable $3.5 million.

The surprise is that for all the high-profile names associated with it and its being granted a theatrical release, Phoenix Forgotten is essentially the same Found Footage film that earnest wannabes trying to break into the industry make by the bucketload for only about $2000. There is nothing about the film that shouts out anything that deserves a high-profile release – no name stars, only a couple of scenes that include some very low-tech visual effects. The rest of the film is shot in homes or schools and mostly with the cast running around in the desert. You keep asking where all the money went – maybe on the aerial shots down on the desert or in post-production where Justin Barber had the whole film shot digitally, printed to VHS and then converted back to digital to get the shot-on-VHS look.

The problem with this approach is that Justin Barber fails to create an interesting mystery out of what happened. There is the vague stab in the direction of a government conspiracy with scenes of Florence Hartigan attempting to interview a governor’s aide and a military captain who changes his mind about talking on camera. Eventually around the one-hour point, we come to the various scenes with the three wandering about and becoming lost in the desert. However, these are dull, not to mention fairly much copied from The Blair Witch Project (1999), albeit with UFO phenomena substituted for supernatural happenings.

One other irksome thing is that the film also attempts to insert Erich von Daniken-ean associations. In his book Chariots of the Gods (1968), Von Daniken put forward the theory that aliens had visited Earth in the past and guided the human race, having helped build places like The Pyramids and Stonehenge, and as a result were portrayed by the ancients in the Bible, the Easter Island heads, the drawings at Nazca and so on.

Though widely ridiculed by archaeologists and historians, Von Daniken’s pseudo-scientific ideas have turned up in numerous other films including Starship Invasions (1977), the original Battlestar Galactica (1978-9), Hangar 18 (1980), The Pumaman (1980), Sky Bandits/Sky Pirates (1985), Stargate (1994), AVP: Alien vs. Predator (2004), Indiana Jones and the Kingdom of the Crystal Skull (2008), 10,000 B.C. (2008), The Fourth Kind (2009), Stonehenge Apocalypse (2010), Killer Mountain (2011) and Prisoners of the Sun (2013), as well as the von Daniken documentary Chariots of the Gods (1970), not to mention were previously employed by Ridley Scott in Prometheus (2012). Here there is an interview with a member of the local Indian nation who talks about the lights being Sky People and a couple of other scenes where the group come across petroglyphs that would seem to suggest the UFOs are ancient in nature.