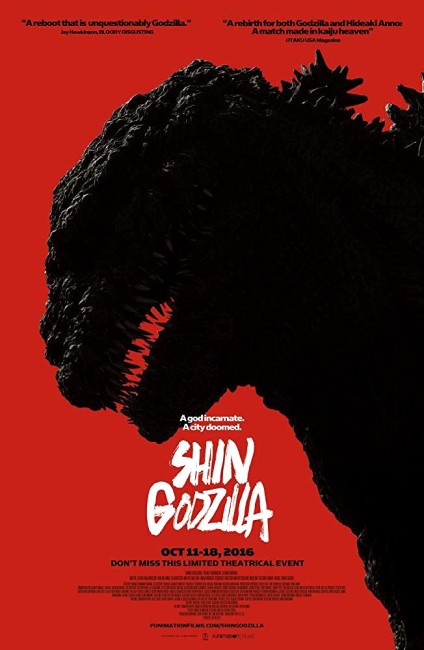 The Japanese government receives reports of a wave moving towards Tokyo Bay, while tremors cause a tunnel to start collapsing. Various department heads and officials debate over the cause of this and the appropriate response. A giant creature is spotted moving up the rivers and then into the city, bulldozing everything in its path. On land, the creature metamorphoses into an upright lizard creature that walks on its hind legs. The Americans call it Godzilla, a corruption of the Japanese ‘Gojira’, and it is determined that it has been bred by and feeds on radiation. Godzilla causes mass devastation, blasting vast swathes of the city with its radioactive breath. The Prime Minister reluctantly authorises military force on Japanese soil but nothing the armed forces bring against it is able to affect Godzilla. The Americans decide the only recourse is to drop a nuclear weapon on Tokyo.

The Godzilla series is one of the most long-running franchises in cinematic history, going all the way back to the original Godzilla (1954). This was the 29th film in the Japanese series. Godzilla has undergone many different changes in that time, starting out as a fearsome embodiment of the pain felt at the atomic bombing of Hiroshima and Nagasaki but within the space of a decade becoming a children’s superhero. The effects have gradually changed from men in rubber suits to taking on board more in the way of animatronics and gradually CGI effects. A full list of the Godzilla films is at the bottom of the page.

Shin Godzilla – peculiarly the film has become better known by the Japanese title than Godzilla: Resurgence, the one it was given in English-language release – comes after the longest gap we have seen between films in the series’ 62-year history. It has been twelve years between this and the previous Japanese entry Godzilla: Final Wars (2004). Before that, the longest gap was the seven years between Terror of Mechagodzilla (1976) and Godzilla 1985 (1984). Of course, that twelve year gap only exists if you count the Japanese Godzilla films, otherwise it has been a mere two years between Shin Godzilla and the US remake Godzilla (2014), a film that has no small influence over the Japanese revival here.

Godzilla started out as a monster. It took four sequels into the original series before Godzilla became the good guy in Ghidrah the Three-Headed Monster (1964) and was subsequently reconceptualised as a defender of Japan against other monsters and alien invaders. Ever since the 1980s revivals, Toho seem undecided whether Godzilla is rampaging aggressor or superheroic defender of Japan. Every few films it seems, the series is rebooted and either goes back to Godzilla being a monster and pretending that none of the other sequels had taken place between 1954 and then, only for Godzilla to be back to being a good guy again by the next film.

Here Toho not only go with Godzilla as aggressor once again. While all of the other Japanese reboots go with the idea that they are direct follow-ups to the 1954 film, this even dispenses with the idea that there has been any other appearances of Godzilla before this. Hideaki Anno announced that Shin Godzilla would be a reimagining of the original that would realistically depict what it would be like if Godzilla were to appear today. As such, Godzilla has been given a complete design and reconception. We initially get to see something else crawling out of the ocean – a bizarre sloth-like creation with comically cartoonish bug eyes that undulates across the city. It is 45 minutes in before this hatches into the monster we all know.

The fully formed Godzilla comes with a redesign that makes it look the most fearsome of any incarnation to date – the gnarled lizard-like carapace is broken up with fissures that reveal a red interior that spills a radioactive goop across the city and lights up from the inside when it breathes fire. There is also some scientific discussion on Godzilla’s origin and biology, even an amusing scene that notes that the derivation ‘Godzilla’ is American and the correct kanji pronunciation is ‘Gojira’.

Shin Godzilla is certainly a very different Godzilla film to anything that Toho has turned out before. Perhaps the strangest aspect of this is that Hideaki Anno spends quite a reasonable percentage of the film on the discussions that go on between the various government departments about what to do. This does result in a very talk-heavy film. I am a fairly fast reader but I had difficulty keeping up with the pace of the subtitles as they whipped by during the lengthy discussions. Inter-governmental debates and meetings are not the most exciting stuff for a monster movie so this does seem an odd choice – possibly Hideaki Anno took the whole assignment of realistically depicting Godzilla today too literally. I also suspect that this is something that holds a critique of the Japanese government’s response to the Fukushima disaster.

The one message all of these scenes do leave you with is that the Japanese government is like a lumbering dinosaur that is figuratively fiddling as Rome burns, debating over which department’s jurisdiction the threat is and the proper legal procedure for dealing with the crisis or whether there exists proper authorisation to allow Japanese armed forces to operate in Tokyo, all while the city is coming down around them. The film’s message would seem to be that the real solution comes when people dismiss the bureaucracy and the scientists and nerds get together and decide that there is no authority or rules.

The film is also much changed in its depiction of Japan’s dealings with America. Previous Godzilla films had not much concerned themselves with the politics of Japanese-American relations and had always regarded the US akin to the grown-up the child runs to when they need help. Here the government reacts in horror to the American suggestion of unleashing a nuclear weapon on Tokyo, while the end of the film has the Prime Minister to-be standing up to assert the decision to do things his way.

Where the film does work best is during the effects and mass destruction scenes, which are hands down the best in any Godzilla film to date. Taking a leaf from the US 2014 reboot, this is one of the few Godzilla films that tries to give an impression of the immensity of the creature as it plows through the city. You get a real thrill during the climactic scenes watching a dozen trains crashing into it at once and it swinging cranes around in its mouth like tiny toothpicks, or of the embryonic cartoon-eyed Godzilla larva moving through the city, down rivers, bulldozing a flotilla of small boats ahead of it. The scenes with the military going into action against it are intensely exciting for the fact that Hideaki Anno is creating mass destruction on an epic scale. Although the biggest and most awe-inspiring thrill comes when Godzilla finally activates his radioactive breath and blasts it in a swathe across the city like a terawatt laser beam, incinerating everything in its path.