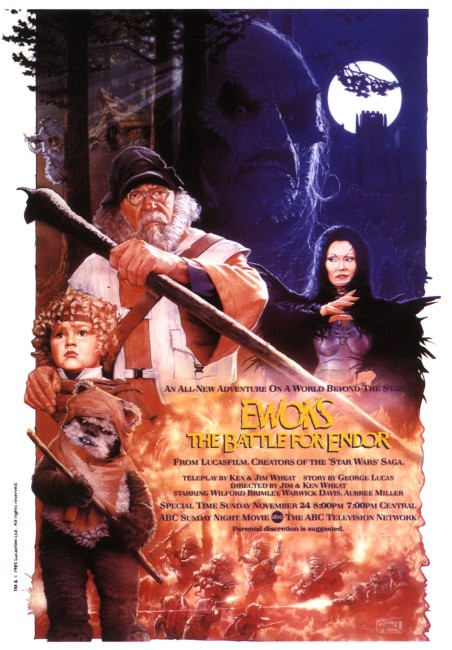 aka Ewoks II: The Battle for Endor

Cindel and her family are about to depart from Endor when an army of lizard-men raids the Ewok village. Cindel’s brother and parents are killed and all the Ewoks captured. The starcruiser’s energy source is taken by the witch Charal to provide power for the lizard people. Cindel and the Ewok Wicket manage to escape. Travelling through the forest, they befriend a grizzled old hermit Noa and persuade him to help rescue the Ewoks. Meanwhile, Charal, unsuccessful in her attempts to make the ship’s power source work, returns determined to capture Cindel.

The Ewok Adventure (1984) was a spinoff from Return of the Jedi (1983). It was designed for US-tv consumption, intended to highlight the soft, furry Ewoks who had been a big winner with the moppet sections of Jedi‘s audiences. It was released cinematically outside the USA under the title Caravan of Courage where it was a modest hit, snapped up by audiences hungry for more of the Star Wars universe. Ewoks and the Marauders of Endor/Ewoks II: The Battle for Endor was the second of these Ewok movie spinoffs, again made for tv but released cinematically abroad.

This time Lucasfilm seems to have intended the film for theatrical release, giving it a decent effects budget and shooting for widescreen instead of grainy tv print blow-up. The effects are decent, with stop-motion animated lizard creatures and a fine aerial battle between a hang-gliding Wicket and a pterodactyl. The result is a light but effective children’s film.

It is one that even hearkens back to the original spirit of Star Wars (1977) upon occasions – notably the end shootout and sword-duel, as well as Peter Bernstein’s score which conducts a decent imitation of John Williams. Indeed, Wilford Brimley plays the Noa character close to the grizzled Ben Gumm-like hermit characterisation that George Lucas originally conceived Ben Kenobi as. This is a better film than the predecessor, even if solely for the fact that it disposes of the annoying Eric Walker character from the outset.

It is certainly far more fairy-tale than Star Wars ever was. The plot includes unicorns, magic rings, shape-changers and Siân Phillips as a hammily cackling witch, all of which takes it into the realm of ‘pure–’ rather than ‘science-fantasy’, the term that Lucas used to describe Star Wars. The elimination of all but one of the Ewoks for the greater duration and a good array of nasties allows proceedings to advance with a minimum of cuteness, bar a minor lapse into knockabout slapstick in the middle with Wicket burning his ass on a fire and Cindel knocking over a steam pipe.