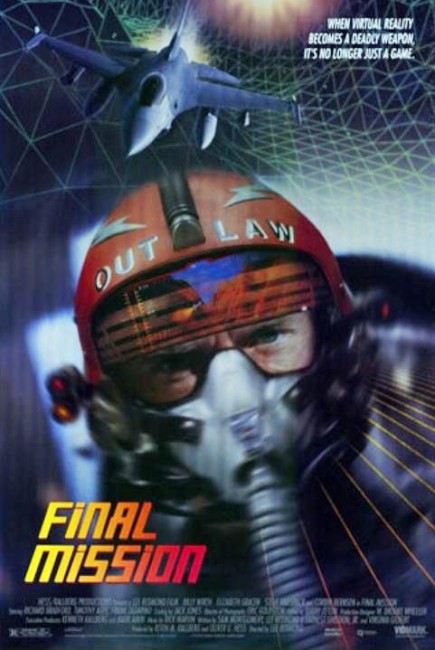 Air Force pilot Frank ‘Outlaw’ Waters discovers that fellow pilots who are testing out a new Virtual Reality weapons targeting system have been experiencing memory loss and blanking out in the cockpit. This has resulted in Frank’s best friend crashing and another pilot blowing up a cop car. When Frank discovers that his superior officers are covering these accidents up, he conducts his own investigation. In so doing, he discovers that the Virtual Reality system has been designed to brainwash pilots to become killers.

Final Mission is like Top Gun (1986) with Virtual Reality. It never amounts to a great deal more than that. There are a good many scenes of planes flying, some Virtual Reality scenes and a conspiracy plot to generate suspense – it is the sort of film that was made to fill video shelves.

As such, Final Mission was only a second-rate attempt to jump aboard and exploit the fascination with Virtual Reality that was a hot topic in the media at the time it came out. The script has an ill-defined idea of what Virtual Reality is supposed to be. Virtual Reality is meant to be a computer-simulated sensory environment but the film’s view of Virtual Reality is that it is some sort of glorified videogame targeting system.

In fact, the two ideas seem at mutual opposites – Virtual Reality sets out to create an environment detached from the real world, wheras the film ironically sees it as providing an enhanced viewing system. Furthermore, the Virtual Reality sequences are not very interesting – the animation level is only about that of the average arcade video game and certainly primitive when compared to other contemporary efforts like The Lawnmower Man (1992).

The conspiracy plot becomes so contorted it is impossible to follow. We are never sure how many sides there are meant to be – Steve Railsback is involved in covering things up with businessman Richard Bradford; Elizabeth Gracen becomes involved with hero Billy Wirth before she is revealed to be helping Railsback; Corbin Bernsen is also involved in the conspiracy – but this seems to be a completely different faction due to the fact that he assassinates Railsback.

Indeed, the revelation of Corbin Bernsen as the real villain ends up legitimising Steve Railsback who was the one behind the brainwashing scheme in the first place. The film ends with Billy Wirth happily driving off into the sunset with Elizabeth Gracen, having somehow swept under the carpet her involvement in the conspiracy and willingness to pull a gun on him.