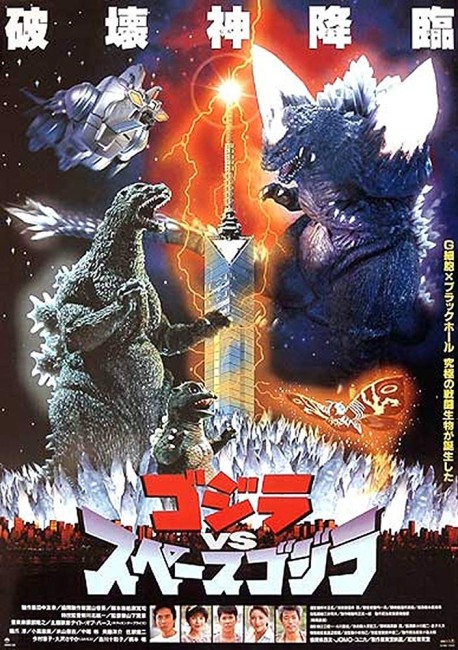 aka Godzilla Vs Spacegodzilla

Two different groups both mount separate efforts to tackle the threat of Godzilla. Project Mogera has built a giant manned robot Mogera (Mobile Operations Godzilla Universal Export Robot Aero-Type) that is designed to battle Godzilla. Meanwhile, Project T has trained a psychic, Miki Saegusa, and intends to fire a tracker into Godzilla’s skin from which she will be able to psychically control its movements. Both groups cross paths on an island where Godzilla meets up with Baby Godzilla. There they witness the arrival of an alien form of Godzilla that is partly formed of crystals. As the two monsters battle across the Japanese countryside, it is theorised that Space Godzilla, as it is named, was formed of G-cells from Godzilla and spores from Biollante that were mutated together into a new lifeform after they went through a black hole.

Godzilla vs Space Godzilla was the 21st of the Japanese Godzilla films. It was the fifth of the Godzilla films of the modern era that began with Godzilla vs. Biollante (1989) wherein the series was reworked on bigger budgets and with the employment of animatronics and later CGI effects to create all the mass destruction.

Godzilla vs Space Godzilla is probably also the weakest of the modern Godzilla films (although one would not go so far as to place it down on the level of some of the Jun Fukuda entries of the early 1970s, which remain the nadir of the Godzilla series). This carries on in continuity from the previous entry, Godzilla vs. Mechagodzilla (1993), with creatures that were introduced there – Baby Godzilla – being continued over here, while the Mogera is a variant on the Mechagodzilla mecha that we saw in that film, and we also have reference made to the destruction of Biollante in Godzilla vs Biollante.

The special effects are highly variable as the modern Godzilla films go. We see an impressive giant robot (the Mogera) being put together in the first few minutes. On the other hand, Baby Godzilla looks rubbery. The space battle scenes are decidedly so-so. Space Godzilla is one of the strangest of Godzilla’s nemeses – a blue Godzilla counterpart with a giant mass of glowing crystal on its shoulders and its flying version that looks like a single giant crystal with a Godzilla attached to its undercarriage. The mass destruction is strictly average for the era and unremarkable in the end consideration.

What makes Godzilla vs Space Godzilla a weak entry in the series is a poor plot. The characters feel even less attached to the plot than they do in a Godzilla film, which is never much at all. Space Godzilla never seems to have any motivation and the scenes with the psychic Megumi Odaka and the gangsters seem randomly inserted from another film and not well connected to the kaiju film we have. Although there is one kind of cool/weird scene with a shootout in a room where Megumi Odaka is being held prisoner and one of the bad guys turns the bed sideways to act as a shield and she just levitates it straight up.

Here almost the whole film seems occupied by monster battles and mass destruction sequences that just go on and on – almost two-thirds of the film consists of monster battles – even then, none of them are particularly standout. Director Kensho Yamashita, who was an assistant director on some of the 1970s Godzillas, drags the show out, particularly in the scenes on the island where proceedings seem to go on forever with the various parties running around trying to hit Godzilla with bullets.