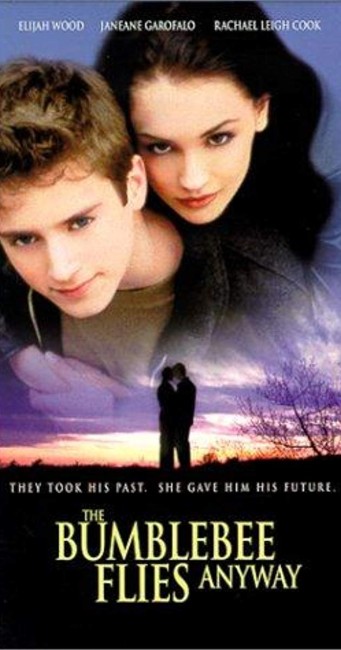 Barney Snow has amnesia and cannot remember anything about his past except brief images of a car crash. He is placed in a hospital ward with several other young people who have terminal illnesses. Barney’s doctors are engaged in what they call the Bumblebee Experiment where they are trying to help him regain his memory. As he struggles to remember, Barney befriends the dying but embittered Mazzo and is attracted to Mazzo’s sister Cassie.

The Bumblebee Flies Anyway is a drama that would in most other circumstances be a Disease of the Week tv movie. It was however originally made as a theatrical release. It certainly has a much more laidback pace and an indie sensibility than a tv movie. Despite some reasonably well known names in the cast list – Elijah Wood just before being cast in The Lord of the Rings, Janeane Garolfalo and Rachael Leigh Cook – the film sat on shelves for several years and was then dismissed into the backwaters of dvd/cable release.

The earnestness of the Disease of the Week feelgood melodrama makes The Bumblebee Flies Anyway a difficult film to get into. The pace is slow and leisurely. The film finally starts to become interesting about halfway through when it introduces a science-fiction spin. [PLOT SPOILERS]. Here we learn that Elijah Wood’s amnesia has been artificially introduced as a radical cancer cure on the hypotheses that if his conscious mind does not know his body is ill he will go into remission. This does take the Patch Adams approach of the healing power of positive thinking to a somewhat nonsensical degree but the idea makes for a good twist.

Here the film starts to resemble something akin to an M. Night Shyamalan film, or a sudden conceptual unveiling science-fiction film like Open Your Eyes (1997) and in particular Final (2001). Unfortunately, rather than play it as a reality-bending thriller or even explore the more mundane theme of the amnesiac central character trying to piece back together their identity, The Bumblebee Flies Anyway continues as a Disease of the Week melodrama and displays little interest in any of these conceptual angles. It is not even made particularly clear why the doctors had to fake the image of a car accident in Elijah Wood’s mind.

Alas, even as a Disease of the Week melodrama, The Bumblebee Flies Anyway fails to fly anyway. It challengingly wants to jump onto the Assisted Suicide and Right to Die debates, at one point having Elijah Wood prepared to push the dying Joe Perrino off the roof of the hospital so that Perrino can fulfil his dream of driving in a car and going out in a blaze of glory rather than wasting away. Alas, the film completely weasles out on the ethical issues involved. Rather than have Elijah Wood being ready to push a still-living character off the roof to his death in the wooden mock-up of a car he has built, it cops out by having Joe Perrino die while everybody is debating about whether or not to push and Elijah Wood then simply pushing the dead body off the roof. It is a piece of sleight-of-hand plotting convenience that fails to come down on either side of the argument and surely reveals a conceptual timidity in addressing the issues. There is an absurd coda to the scene where Joe Perrino’s body and the makeshift car are not found and the film leaves us with the implication that he has simply flown away.

Another very silly piece is the film’s title, which refers to the claim that according to the laws of aerodynamics a bumblebee is unable to fly. The frequently stated claim is that the bumblebee’s body mass is supposedly too large to get off the ground according to the amount of lift that the spread of its wings should theoretically be able to carry. In reality, this is a piece of scientific urban legend that has crept into popular belief and has been taken by many, including the filmmakers, as an analogy for the mind over scientific rationalism and is simply not true. This misnomer is a failure of calculation that only works when one considers the bumblebee in terms of static weight – ie. akin to a bulk object such as a plane that glides and banks using its wingspan – rather than one that is capable of powering itself through its own energy. ie the bumblebee’s rapidly moving wings. You can make a comparison by reversing the analogy – it would be the equivalent of trying to assess the capability of a plane to fly based on its ability to flap its wings without taking into account it having jet engines or a propeller.