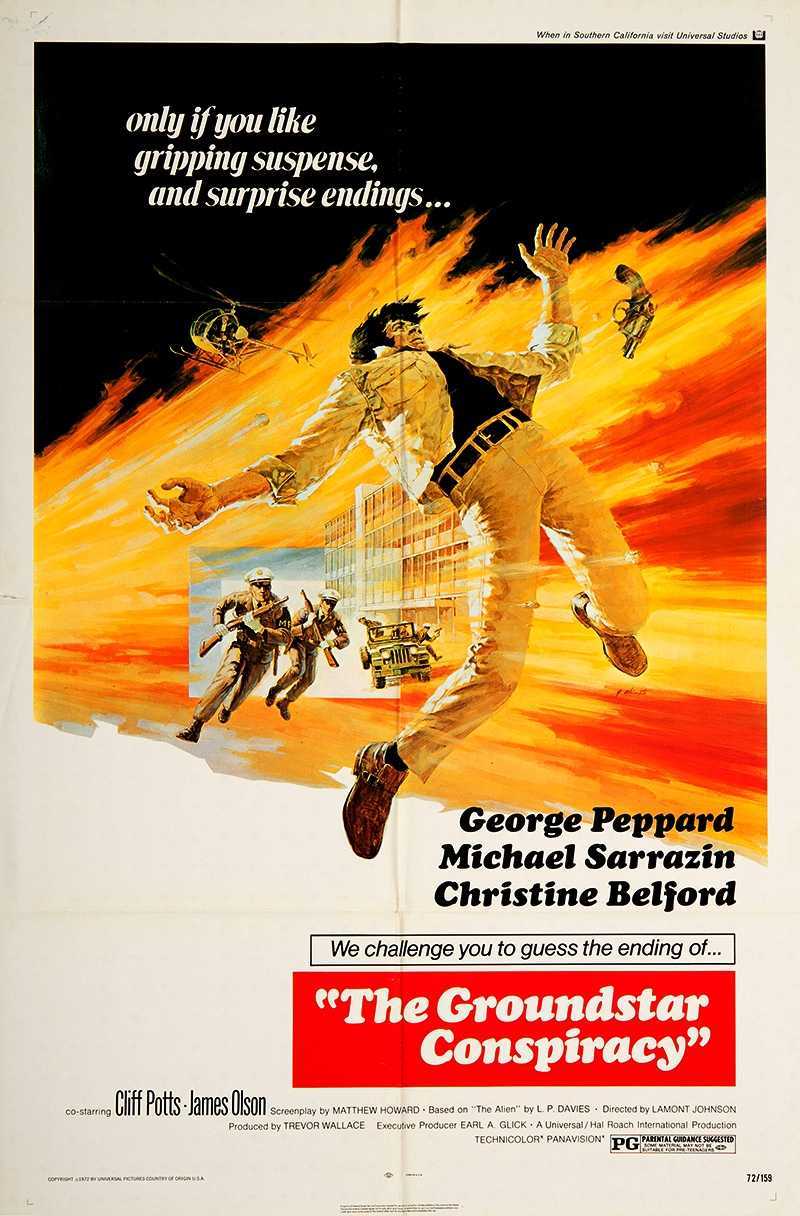 A man escapes from the Groundstar space research laboratory as it explodes. Left badly burned, he is arrested on the orders of covert government agent General Tuxan. Though the man was working at the laboratory under the name John Welles, there is no record of his identity prior to taking the job and Tuxan is certain that he is a spy. Tuxan has Welles interrogated and tortured to find out who he is working for but the man claims to have no memory of who he is. Welles manages to affect an escape and goes on the run, unaware that his escape has been allowed and that he is being monitored at every step. Gradually it becomes apparent to Welles that Tuxan has had him surgically altered and his memory erased to become a pawn in a game to draw out a group of spies.

The Groundstar Conspiracy was a movie that was initially made for tv that instead ended up being given a cinema release. Probably the theatres were the best destination for The Groundstar Conspiracy – it is difficult imagining it ever being spun out into a series, it is hard to conceive of anything as a continuing hook unless the identity confusion were spun out akin to a cross between tv’s The Fugitive (1963-7) and The Prisoner (1967-8). As a film, it holds up well, apart from the grainy blow-up photography and the tv-styled opening credits.

Not much remains of L.P. Davies’ original novel The Alien (1968), which had the central character brainwashed into believing he was an alien as part of the spy plot. The altogether different story spun out of the material is tight and effectively wound, being far more darkly internal in psychology, preoccupied as it is with questions of identity. Michael Sarrazin gives one of his typical unassumingly bland performances but George Peppard sweeps the film up magnificently with a cold, ruthless menace – now that’s the character one would have liked to have seen as the hero of a tv series.

The plot of the surgically-altered accident survivor caught up in spy games was also used in the obscure but interesting British sf film Who? (1974). Indeed, The Groundstar Conspiracy was one of several films that came out in the 1960s concerning themselves with brainwashing and the erasure of identity – others included The Manchurian Candidate (1962), The Mind Benders (1962), The Face of Another (1966), The Mind Snatchers (1972) and tv’s The Prisoner.

Veteran tv director Lamont Johnson made several other films with the likes of The Last American Hero (1973), Lipstick (1976) and Cattle Annie and Little Britches (1981). Johnson later returned to the science-fiction genre with Spacehunter: Adventures in the Forbidden Zone (1983).