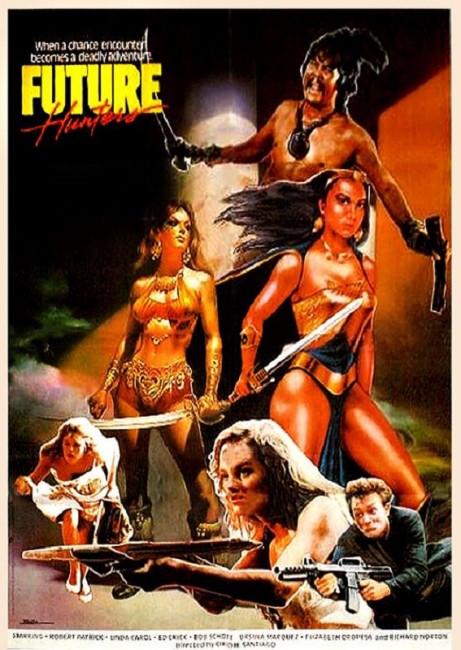 In the year 2025, the world has been devastated by a nuclear holocaust. The warrior Matthew ventures into the territory of the warlord Zaar to obtain the head of the Spear of Longinus, which is reputed to have pierced the side of Christ. This transports him back in time to 1986 to the desert outside L.A. Michelle, who runs a restaurant in the city but has a passion for anthropology, is examining a nearby ruin with her boyfriend, the former soldier Slade. Matthew arrives just in time to save Michelle from being attacked by a biker gang but is shot in the process. Before he dies, Matthew gives Michelle and Slade the head of the spear, urging them to reunite it with the shaft to prevent the nuclear apocalypse. Slade finds the idea ridiculous but they are soon hunted by heavies wanting the spearhead. Their quest takes them on a journey from Hong Kong to Manila to a lost island inhabited by pygmies and Amazons, all the while pursued by Nazis wanting the spear.

Future Hunters has a title that suggests it is one of the B-budget time travel action films that came out in the late 1980s/early 1990s exploiting the success of The Terminator (1984) – see the likes of Time Runner (1993), Time Chasers (1994), Time Under Fire (1997). The opening scenes start on a standard Mad Max 2 (1981)-styled Post-Holocaust Film scenario as warrior Richard Norton ventures into the citadel of a warlord to obtain the Spear of Longinus. (In popular myth, particularly the works of composer Richard Wagner, this is supposedly the spear that pierced the side of Christ and is reputed to have mystical power). By means that are never clearly explained, here the spear has the ability to trigger the nuclear apocalypse and transports Richard Norton back in time to 1986.

It is after this point that Future Hunters abandons the time travel aspect – largely by killing the time traveller off a few minutes after he arrives in the present – and become an out-and-out Action Film. This is also the point Future Hunters becomes far more entertaining. It seems to want to pack in something of just about every film trend of the day. There’s the opening cobblings of Mad Max 2 and The Terminator. The adventure quest plot for a magical artifact up against Nazi villains seems to be trying to copy Raiders of the Lost Ark (1981). In the latter sections, the film throws in Pygmies and Amazonian jungle tribes in a nod to the lost world jungle adventure.

There’s a visit to Hong Kong where the film naturally throws in some martial arts sequences. These include an appearance from Bruce Li, one of the stars of the Brucesploitation phenomenon (which emerged following the death of martial arts superstar Bruce Lee, consisting of actors that adopted soundalike names such as Bruce Lai, Bruce Le, Bruce Lei, Bruce Lie, Bruce Ly, Bruce Thai, Myron Bruce Lee and others). In fact, Li has such a lithe ferocity in his moves that he runs rings around the film’s nominal hero Robert Patrick. It is to the film’s detriment that Li drops out of the action once it leaves Hong Kong.

There is minimal plot sketching these things together, The Spear of Longinus is no more than a fantasy McGuffin that drives the plot. It is a film essentially made up of serial action sequences. Of these, it must be said that Cirio H. Santiago delivers them with great enthusiasm, especially the martial arts sequences or large-scale battle scenes with mercenaries in the jungle, even combat sequences with dwarves getting into the action.

The film also has the novelty of starring a 28-year-old Robert Patrick, five years before his breakout role in Terminator 2: Judgement Day (1991). This is not one of Patrick’s more memorable roles – he seems to spend the early half of the film complaining about everything girlfriend Linda Carol does from her passion for anthropology to advising her to abandon her quest for the shaft, even that she just give the artifact to the pursuing bad guys. He seems a whiny jerk whose only role is to undermine the female lead and his slotting in to become a regular action role in the latter half feels entirely unearned.

It is also claimed by the IMDB that the film is scripted by British director J. Lee Thompson, who was responsible for works like Cape Fear (1962) and Conquest of the Planet of the Apes (1972) among others. It seems unlikely that a director who was at the time was enjoying making a string Charles Bronson films and had just come from shooting his own Indian Jones copy King Solomon’s Mines (1985) would take the time out to write a B-budget action film for Filipino filmmakers substituting a credit he has never used elsewhere. It seem far more likely that this is somebody else with a similar name.