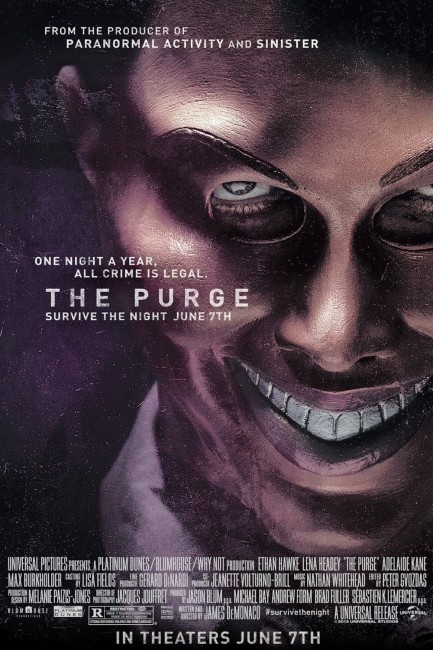 The year 2022. All crime and poverty have been eliminated in America under the society created by the new founding fathers. For one night each year, the Annual Purge is held where anybody is legally permitted to commit any crime including murder. All law and emergency services are unavailable for a period of twelve hours. This is seen as the means for the populace to exorcise feelings of violence and has resulted in a stable society. As the hour of this year’s Purge nears, James Sandin, a successful seller of home safety systems, settles into the security of his home with his wife Mary, teenage daughter Zoey and young son Charlie. Just after they close the armoured shutters on the house, Charlie sees a homeless man begging for help as he is pursued by a mob outside and lets him in. The mob immediately surround the house and demand that the Sandins release the man so they can kill him. They announce that if the man is not released, they intend to bring in equipment to tear the house apart and will kill everybody inside. James decides to comply and turn the man over. However, in the course of trying to capture the man, James’s family questions the right of doing so and not resisting those outside.

The director is James DeMonaco who wrote the screenplays for films like Francis Ford Coppola’s Jack (1996), The Negotiator (1998), the remake of Assault on Precinct 13 (2005) and Skinwalkers (2006), as well as created the short-lived tv series The Kill Point (2007). DeMonaco had previously written and directed the non-genre drama Staten Island (2009).

Like a good many science-fiction scenarios of the future – all reading being banned in Fahrenheit 451 (1966), the populace being eliminated at the age of thirty in Logan’s Run (1976), Manhattan Island turned into a maximum security prison in Escape from New York (1981) – it considerably stretches credibility when it comes to wondering what possible conditions could ever have come about that would make any sane society want to devise such a system. Given that The Purge only takes place nine years in the future from when the film was released, you wonder how any US Congress could vote in a regime where all safety nets are switched off for one night and all crime becomes permissible. Undoubtedly a few people in some states would relish the opportunity to take advantage of their Second Amendment-guaranteed right to accrue military assault weapons and use these on various ethnic and social minorities but you think that maybe about the point it would occur to them that the complete lack of any law enforcement protection would also mean that they too can become fair game would have even the most rednecked gun enthusiast joining the mass protests to defeat such a bill.

I liked The Purge as it started in. The Occupy Movement of 2011 may not have gotten far in its agenda to overturn the economic inequalities of the system but its ideas and images have infiltrated a surprising number of films since then – everything from In Time (2011) to Cosmopolis (2012), The Dark Knight Rises (2012), Uwe Boll’s Assault on Wall Street/Bailout: The Age of Greed (2013) and Elysium (2013), even the Atlas Shrugged films.

Here there seems a rich vein of satire to the images of the One Percent hunkering down in their gated community and relishing a law that allows them to freely kill anyone they dislike. (The film implies that the seemingly utopian harmony the country exists in came about because all the poor and homeless have been eliminated. This does lead to the logical question of just who in this society sweeps the streets, washes dishes, slings burgers in fast food joints and does all the other minimum wage jobs). Even the villain of the film is dressed as a preppy and seems to be motivated solely by the pleasure he will take in killing a homeless person. There is the sense of the film taking a Straw Dogs (1971) scenario, wherein a man shelters a wanted man inside his home only to be surrounded by a mob, but with the politics having been written across the Occupy era – where Ethan Hawke gets a character arc that goes from successful designer of systems that protect the privileged to discovering a basic humanity and deciding not to surrender homeless man Edwin Hodge to mindless mob rule.

At least, that is the promise of The Purge. The delivery is another story. All of it only seems set-up to arrive at a science-fictional version of a Straw Dogs situation. This is a film that seems to set up a social scenario then abandon it without concern for any of the wider implications beyond its story needs – what happens to those who cannot afford gated communities and hi-tech security systems and live in regular homes/apartments? Would there not be such a thing as a massive growth industry in private security contractors in this future? How would a capitalist system thrive when the populace is free to vandalise and loot all public and private property? How would insurance companies cope?

The film’s politics end up being all over the place. The irony here is that while the first half of the film seems to get all gleeful about the thought of the socially privileged being made to realise the selfishness of their ways, the second half becomes an all-but commercial for the pro-gun lobby and the necessity of having to maintain a strong defence in the home. Certainly, the reaction the film received from the preview audience seemed less to do with liberal sympathies for the socially dispossessed and more to do with the pure redneck ones of cheering on the home invaders getting blown away in the climactic scenes, which leaves you wondering just what side of the fence the film was aiming to appeal to.

James DeMonaco gives the feeling of having pastiched elements of the film from other works – the basic premise is heavily reliant on Straw Dogs; while the leader of the mob who is dressed as a preppie and delivers threats with perfectly polite manners (a reasonable performance from Australian actor Rhys Wakefield that needed far more screen time than he gets) reminds much of Michael Haneke’s Funny Games (1997) and its remake Funny Games U.S. (2007); and the home invasion by a group of individuals who are always hidden behind masks is taken directly from The Strangers (2008). Aside from the visceral kick of the climactic scenes and the occasional moment of satire – Lena Headey’s insistence they all sit around the table and wait peacefully until dawn, which comes enforced with the odd smashed-in face – James DeMonaco does an unremarkable job.