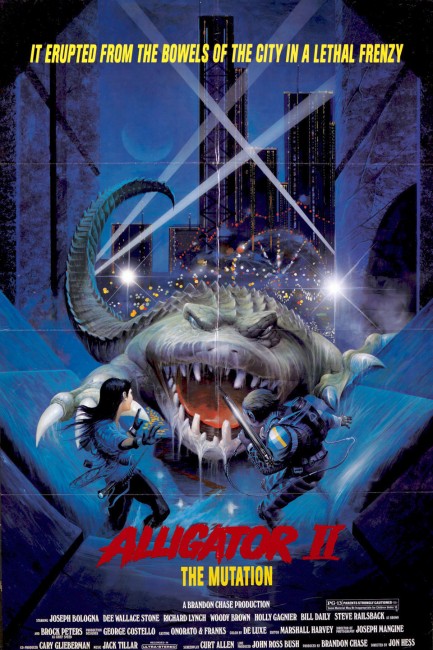 aka Alligator II: The Return

Investigating a missing persons claim among the Latino community, police detective David Hodges discovers there is a giant-sized alligator in the city’s sewers. Hodges’ biochemist wife Christine determines that the alligator has been grown to giant-size after ingesting genetically altered growth hormones that have been dumped in the sewers. Property developer Vincent Brown wants all rumour about the alligator quashed because of an important waterfront development deal he is about to sign. Hodges defies city hall, which is in Brown’s pocket, and goes out on a limb to hunt the alligator as it emerges to devour revellers at a carnival thrown by Brown.

Alligator II: The Mutation was one of the films that emerged amid the sudden explosion of genre sequels in the late 1980s/early 90s. The new era of the commercial video release gave birth to a horde of sequels to films that had only ever been minor successes on their initial release – seven sequels to Halloween (1978), ten sequels to Friday the 13th (1980), six to The Howling (1980), seven to Children of the Corn (1984), seven to A Nightmare on Elm Street (1984), three to Ghoulies (1985), four to Trancers (1985), three to Critters (1986), three to Leprechaun (1992) and four to Return of the Living Dead (1985), which in itself was a sequel to George Romero’s classic Night of the Living Dead (1968). Even minor films that never received theatrical releases or those that were hated upon original release were receiving sequels – how else can one explain King Kong Lives (1986) and Gnaw: Food of the Gods II (1989)?

Alligator II: The Mutation was a sequel to the minor hit of Alligator (1980), which was about a giant alligator emerged from the sewers. The original did receive a theatrical release, although the sequel went directly to video. Alligator II was produced by Brandon Chase and his Group 1 Films, the only returnees from the original, along with cinematographer Joseph Mangine.

All the characters in Alligator II come by cliche – the lone detective standing up against departmental orders to follow what he knows to be right, the corrupt property developer covering up the existence of the monster because it is bad for business that has been a staple of the Animals Amok film since Jaws (1975). The plot here fairly much follows the original Alligator on all points – the monster emerging from the sewers grown big because of experimental hormones dumped there; the grizzled detective hero and his girlfriend/wife who works as a biologist; Richard Lynch cast in the equivalent role of the Big Game Hunter who arrives to sort out the menace; the alligator emerging to go amok at a party thrown by the crooked businessman.

The major difference between Alligator and Alligator II is that while the original played many of the cliches with tongue planted in cheek, this plays everything straight. Hero Joseph Bologna at least gets into some of the spirit of the original and gives an amusingly hard-headed performance.

Most disappointingly, we only get a cut-price alligator that is rarely seen on screen and only ever in brief shots when it is. Even then, all that we seem to get are a large set of stiff jaws and a giant tail. There are almost no shots of the whole body alligator or of it in any contrast to anything to show it is giant sized. Alligator II: The Mutation is formulaic and routine on all levels. The cast play okay but the cheapness of the alligator effects end up bringing the film down.