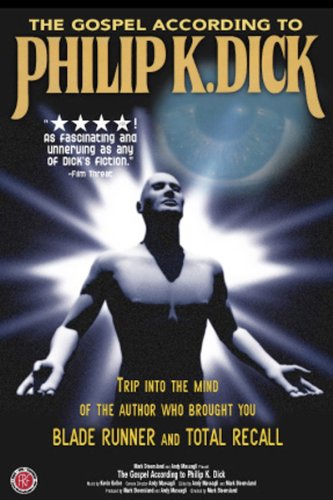 Philip K. Dick has become a cult writer. His works centre around a paranoid universe where reality is perpetually not what it seems – in an interview here, writer Robert Anton Wilson tells an hilarious little joke about how it was rumoured alternately that he was dead or that he had been replaced by a CIA android and, thanks to reading Dick, he can no longer be sure whether he is himself or is an android replacement that has been programmed to think it is Robert Anton Wilson. It is a story that perfectly sums up the essence of Philip K. Dick.

In many respects, The Gospel According to Philip K. Dick is amateurish. It is undisciplined in places – there are parts where the subjects are allowed to ramble on, most notably Duncan Watson, the webmaster of the now defunct Philip K. Dick Slept Here website, going off at a tangent about Russian reverence of Pushkin, or a librarian who pedantically lists all the details of how to access the Dick manuscript collection. All the discussion of Philip K. Dick is limited to interview subjects – there are, for example, no photos ever presented of the man himself. The documentary also tends to cover only the more bizarre aspects of Dick’s life rather than analyzing or discussing his works. A number of the interview subjects – in particular webmaster Duncan Watson and Rolling Stone writer and Dick friend and biographer Paul Williams – have a tendency to come across as geeks with no social skills, something that frequently has the audience laughing, especially when they start reverentially comparing Dick to a religion at the end.

That said, when the story of Philip K. Dick’s life kicks in proper, the results are completely absorbing. Wisely, the bulk of the interview time is turned over to people who knew Dick and more often than not are strikingly literate in their descriptions of the man. The stories that emerge are as way out as anything that ever appeared in Dick’s fiction – like the great unsolved mystery of who blew up Dick’s safe in 1971; the stories of the drug flophouse refuge that Dick used to let his own home be used as; his flight from The Mob owing money; his attempts to hide in a Vancouver drug rehab program.

Most of all, the one Philip K. Dick story that the film is fascinated with and proves most intriguing is the story of ‘the pink beam’ – a bizarre episode that occurred over the period of several months in 1974 where Dick experienced visions of a pink light that seemed to come from a divine source and speak to his ‘third eye’, granting him information about the universe and predicting things he could not possibly know. Dick wrote an 8000-page manuscript to try to understand what was happening and incorporated the material into the novels VALIS (1981), The Divine Invasion (1981) and particularly the posthumously published Radio Free Albemuth (1985).

A great many theories about what was happening are aired, from the plausible – a side effect of mixed medications that Dick was taking – to the way out – involving divine revelation, communication from aliens allied with the Russians or messages from satellites. As Scott Apel notes, it sounds bizarre without knowing the full context of the story and clearly only parts of it are aired here.

Surprisingly, what does emerge (and even when relayed second-hand) is not a portrait of a writer having gone off the deep end or become a crackpot but of an ordinary person trying to deal with and find an explanation for something inexplicable. The result makes for something compulsively watchable. It is a story that evokes a series of mysteries whose explanations offer multiple possibilities of interpretation and whose ultimate answers may only lie in abandoning everyday explanations. Something not that different from a Philip K. Dick novel.