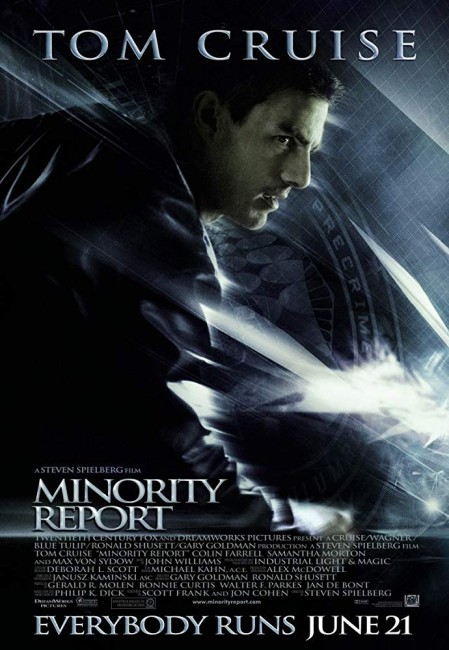 Washington D.C. in the year 2054. John Anderton is a police officer with the Department of Precrime, a pilot project that uses genetic mutations with precognitive abilities to predict when murders are about to happen whereupon they arrest the individual on the grounds of intent. The Precrime force has had an amazing success rate, having allowed no murder to successfully happen within their six years of operation. As Anderton pieces together the information about the next predicted murder, he realizes that the murderer is himself. Anderton goes on the run, hunted by his own department, determined to prove that he is not a murderer. In so doing, he is forced to question whether Precrime is fallible and to dig into the secrets of its existence, all before the thirty-six hours elapse and he is destined to kill a man he does not even know.

Steven Spielberg is probably the word’s most commercially successful director and has become a name that is invariably interlinked with a sense of child-like innocence. Much of Steven Spielberg’s work falls within genre guidelines and he has made a number of ventures into science-fiction. Spielberg’s two greatest science-fiction works are Close Encounters of the Third Kind (1977) and E.T. – The Extra-Terrestrial (1982). They are extraordinarily moving films; they generate a sense of wonder and communion with the mystery and awe of the universe better than almost any other science-fiction film. However, Steven Spielberg’s approach sits at odds with what it is that good science-fiction should do – explore and explain ideas. In these films, Spielberg seems almost entirely disinterested in asking anything about the nature of his alien visitors. Instead, Close Encounters and E.T. feel like wish fulfilment fantasies – of cosmic mystery coming to touch the lives of ordinary people, of aliens becoming the friends of lonely children. For Spielberg, a sense of rational scientific enquiry is impossible in these films, rather they are child-like responses to the infinite and are filled, not with a questing for knowledge but the almost religious certainty that a benign universe will come to carry the pure of heart away in pretty shining lights.

Into the 1990s, Steven Spielberg began to mature as a director. Films like Schindler’s List (1993), Amistad (1997), Saving Private Ryan (1998) and Munich (2005) show Spielberg writing the concerns of a liberal conscience across the broad canvas of history. With the turn of the millennium, Spielberg again returned to science-fiction subjects with A.I. (Artificial Intelligence) (2001), Minority Report and War of the Worlds (2005). These are science-fiction films that are markedly different from Close Encounters or E.T.. A.I. and Minority Report at least are films that, rather than requiring a child-like wonderment of an audience, instead take one through an escalating progression of ideas and show Spielberg’s having developed from science-fiction that is at the behest of simple child-like wonderment to confidently using science-fiction at its full conceptual flowering. It is notable in these films that Spielberg has turned to genre science-fiction writers – Brian Aldiss and Ian Watson in A.I., H.G. Wells in War of the Worlds and no less than Philip K. Dick here. (Although the real source for Minority Report is not so much Philip K. Dick as it is Alfred Bester’s The Demolished Man (1953), which was once a proposed film project from Brian De Palma).

Minority Report is Steven Spielberg with a harder, or at least grittier, edge than we have seen him before. The tone of the film resembles The Matrix (1999) far more than it does E.T.. There is the recurrent theme in just about all of Steven Spielberg’s films of a central character who just wants to find their way back home to the arms of a united family. However, here when Tom Cruise sits down to languish in hologram recordings of his son it is tempered with the later revelation the son was killed by a child molester, a dark undertow that seems as far away from the heart-tugging paean to childhood in E.T. as it is possible to get. Furthermore, the hero is a drug addict, something unheard of in a mainstream American film. There are even a few touches of sexuality, something that almost never rears its head in a Spielberg film.

Minority Report is perhaps the first of Steven Spielberg’s films that is almost entirely driven by a plot rather than a series of emotional epiphanies. It is an exceptionally tight plot, filled with a series of twists but most of all eminently satisfying in its giving the central idea of a future where crime can be predicted a thorough conceptual working out. Indeed, this is possibly the best script that Steven Spielberg has ever had for one of his films. It is especially good at taking us to a point where we ask just what it would take an ordinary man to kill another man he has never met – and the results when they emerge come with a startling conviction. The script also offers ingenious questions about how it is possible to get away with murder in a future where all crimes can be detected before they happen. The film reaches a particularly sardonic ending where the murderer faces the choice of shooting Tom Cruise and being arrested as has been ordained or exercising their free will and in so doing proving the entire system to be false.

Creating his own studio (DreamWorks SKG) has allowed Steven Spielberg an artistic freedom and the budgets to create his dreams that few other directors could ever enjoy. Part of the not inconsiderable pleasure of Minority Report is the fun Spielberg has coming up with the background of the future. The film is almost worth watching alone for the details littered throughout the background – perpetual everpresent video commercials that scan retinas and then address people by name, live-action newspapers, even packets of cereal with animated talking cartoon figures on their side, automated cars that not only traverse the highways but slide up the sides of buildings and slot into the walls of apartments, the nifty retina-scanning robotic spiders and so on. There is perhaps an overly concerted attempt to create a future that avoids the “Blade Runner (1982) look”, with Spielberg’s regular cinematographer Janusz Kaminski instead resorting to his customary overexposed light sources and washed-out monochrome look.

Steven Spielberg creates some exciting action sequences with Tom Cruise jumping around the vertically sliding cars and fighting a jetpack police squad, although the best sequence is a chase through the mall where psychic Samantha Morton’s predictions succeed in helping Tom Cruise deftly elude the police force pursuing them while remaining completely in the open. (Oddly, both Minority Report and Star Wars Episode II: Attack of the Clones (2002) from Spielberg’s old pal George Lucas, which came out only a month before, feature an almost identical series of action sequences – both films have a sequence racing through the skies of the city of the future in air cars, a chase through an automated factory and a fight against a jetpack-equipped opponent).

Minority Report (2015) is a spinoff tv series set after the events of the film where Precrime has been shut down and a Precog is co-opted into regular police investigation, although this was cancelled after ten episodes.

(Winner in this site’s Top 10 Films of 2002 list. Winner for Best Adapted Screenplay and Best Production Design, Nominee for Best Director (Steven Spielberg) and Best Special Effects at this site’s Best of 2002 Awards).