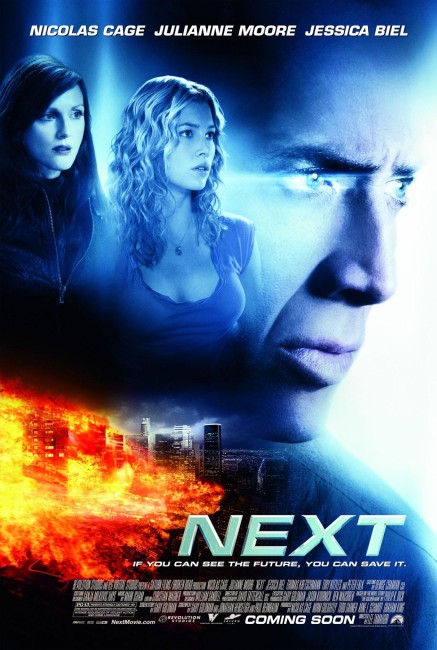 Cris Johnson has a shabby Las Vegas magic act. What his audiences do not know is that his talents are real. He has the ability to look two minutes into the future and uses this to make money at the gambling tables. This has come to the attention of FBI agent Callie Ferris who is certain that Cris has real precognitive abilities. She tries to persuade her doubtful superiors that Cris could be usefully employed in the hunt for terrorists who have smuggled a nuclear weapon into the US. Cris has for long-time had a vision of a girl he will meet in a cafe at 9:07 am one morning. This now turns out to be teacher Elizabeth Cooper and Cris is able to save her from an annoying boyfriend. He joins her on a journey to the reservation where she teaches but they are pursued by the FBI who want to forcibly recruit Cris and the terrorists who are determined to stop him. As he seeks to avoid outcomes where he is captured or killed, Cris is unable to stop Elizabeth being abducted and used as hostage by the terrorists.

The works of science-fiction author Philip K. Dick have proven surprisingly popular on film. Philip K. Dick wrote novels such as The Man in the High Castle (1962), The Three Stigmata of Palmer Eldritch (1965), Counter-Clock World (1967), Do Androids Dream of Electric Sheep? (1969), Ubik (1969), Flow My Tears the Policeman Said (1974), A Scanner Darkly (1977) and Valis (1981). Dick specializes in a world where reality and personal identity are always under doubt – the typical Philip K. Dick protagonist discovers throughout the course of the story that their reality is an illusion or a drug hallucination, or that he is an android duplicate without knowing it. On film, Dick’s books and short stories has provided the basis for works such as Blade Runner (1982), Total Recall (1990), Screamers (1995), Impostor (2002), Minority Report (2002), Paycheck (2003), A Scanner Darkly (2006), The Adjustment Bureau (2011), Total Recall (2012), Radio Free Albemuth (2014), the tv series adaptation of The Man in the High Castle (2015-9) and the tv anthology series Philip K. Dick’s Electric Dreams (2017– ). Also of note is the documentary The Gospel According to Philip K. Dick (2000) about Dick’s exceedingly bizarre life.

Next is purportedly based on the Philip K. Dick short story The Golden Man (1954). The Golden Man is set in a future where a male-female duo of government agents is engaged in hunting down and eradicating mutants that have developed dangerous super-powers. One of these mutants was Cris who has golden skin – thus the ‘golden man’ of the title. It is discovered during the course of the interrogation that Cris has the ability to see into the future. Cris can also use his mental abilities to seduce, which he does with the female agent, leaving her impregnated at the end of the story. As one can see, Next bears almost no resemblance to The Golden Man. There is no longer any future setting; the mutants being hunted and exterminated have been written out and Cris merely becomes a stage magician with clairvoyant abilities. He no longer has golden skin, while his ability to mentally seduce has been eliminated – Jessica Biel briefly wonders if he has used his abilities to manipulate her but there is no suggestion that this is anything other than her doubts. And, as with several other Philip K. Dick film adaptations, notably Total Recall and Paycheck, Next has also been turned into an action movie, even though there is no action element in Dick’s original stories. (Both Next and Total Recall were also substantially written by screenwriter Gary Goldman).

Next bears so little resemblance to The Golden Man that it is better off being seen as an original work. Certainly, there is little to the film that feels like a Philip K. Dick story – none of Dick’s reality bendings, none of the confusions and puzzles over personal identity or the constant paranoia and doubt about what is real. Indeed, much of Next feels like it has been thrown together as a potpourri of elements from recent other films – there is the person with real powers who hides as a stage magician, which is somewhat akin to the recent spate of stage magician films with The Illusionist (2006) and The Prestige (2006). The plot about someone with foreknowledge of the future venturing through time to stop a terrorist threat, while also saving the life of a girl they have fallen for who is likely to be killed unless they act, is very similar to the recent sf/action film Deja Vu (2006).

I was prepared to give Next some rope as it started in. There’s a promising scene in a casino where we see Nicolas Cage using his abilities to escape from security even though visible on their cameras, simply by hiding in plain sight. The sequence is intriguing, even if it has been borrowed in toto from the precognitive chase sequence in Minority Report (and for that matter, the basic premise of Paycheck). However, the subsequent car chase does not work as well, despite Lee Tamahori choreographing some exciting action, due to the sequence confusingly blurring between what is happening and what Nicolas Cage is seeing as about to happen.

Thereafter, Next fails to sustain its premise in any interesting way. Indeed, with most of the Philip K. Dick short story being thrown out, there is now nothing that differentiates Next from a standard clairvoyance thriller like Eyes of Laura Mars (1978), Fear (1990), Hideaway (1995), In Dreams (1999) or The Gift (2000). There are some interesting scenes during the middle with Nicolas Cage and Jessica Biel holed up in the motel as the FBI try to outwit his two minutes warning to capture him, which does give some suggestion of the conceptual possibilities that the film might have held. However, the rest of the film plays by the numbers in a series of unexciting scenes as Nicolas Cage tries to find the forewarned clues that will lead him to where the terrorists are. The biggest problem one had with the script is the lame twist revelation it pulls near the end – [PLOT SPOILERS] that everything that has happened in the latter half of the film is no more than a precognitive vision that Nicolas Cage is having. It is an infuriating twist on the order of revealing that the entire film was all a dream or a Virtual Reality illusion.

There are also a number of plot holes – the terrorists never seem to have any kind of ideology or cause, they are just there because the plot needs a nemesis to drive the action. We never find out how they seem to get so many inside tips about Nicolas Cage’s whereabouts or why they believe that he can stop their plans when even Julianne Moore’s superiors seem to think that she is wasting her time trying to recruit Cage. It is also not clear how the ability to see two minutes into the future could be so crucial to apprehending the whereabouts of an imminent nuclear detonation, which could be anywhere in the country – it is an incredibly narrow margin of time for the FBI to not only locate but also disarm a device.

Not even the relationship that the film sets up between Nicolas Cage and Jessica Biel manages to work. The two stars have almost zero chemistry together. A large part of the problem is that Jessica Biel seems miscast. She has played tough, assured and sexy in other genre films like Blade Trinity (2004) and Stealth (2005) and clearly has a future ahead of her. The problem here is that she has been cast in a role that is defined as being The Girl Next Door. Biel’s forte is in playing tough, highly athletic and intently serious – she is not the type of actress that seems to excel in doing demure or playing with twinklingly infectious smiles that can win over audience’s hearts. Forced to play that here, she only seems to be coast through the role detached.