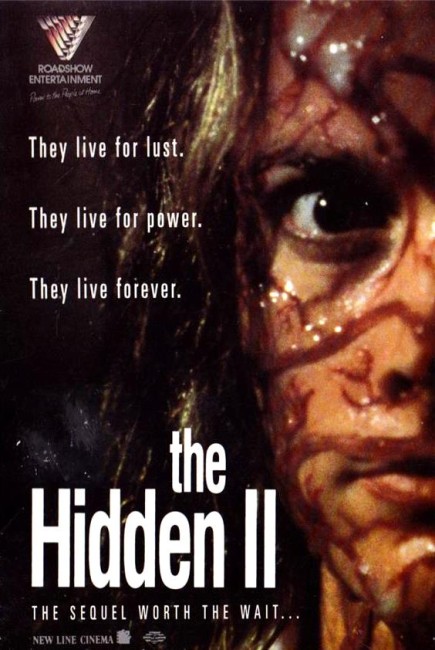 The mysterious MacLachlan appears to Juliet, the daughter of the late detective Thomas Beck, revealing that he is an alien. He has been charged with stopping the body-hopping parasite, which, although it was killed, has bred and is about to spawn further. Together the two of them team up and try to stop the parasite as it passes from body to body, as well as to find the warehouse where its spores are germinating.

The Hidden (1987) was a sleeper hit, offering an original spin on the alien body snatcher theme that was conducted with style and panache. It quickly gained a genre reputation. The Hidden II, by contrast, is a perfect example of all that is bad about sequels.

You get sinking feelings during the first few minutes, an entire fifteen of which are a reprise of scenes from the first film (within blatant falesehood, the trailer even announces ‘With a Special Appearance by Michael Nouri’ when his scenes only consist of stock footage). Thereafter, The Hidden II becomes merely a big bug hunt that consists of numerous scenes of alien parasites jumping out at people a la a host of tawdry Alien (1979) copies, something that The Hidden rose considerably above being.

The second half is only a tired reprise of the first film. More crucially, there is nothing in these scenes that approximates any of the original’s style and wit – this film only has another alien moving between human bodies liking rock music and fast cars because that’s the way the first film had it.

The scenes where this version tends to work are the scenes of Rafael Sbarge’s good alien trying to understand human ways and his romance with Kate Hodge. The scenes are cliched and banally played but Sbarge and Hodge are well paired and make a nice couple, giving the film its few moments of sincerity.

The Hidden II was so poorly received that its’ director Seth Pinsker has never worked in the industry again.