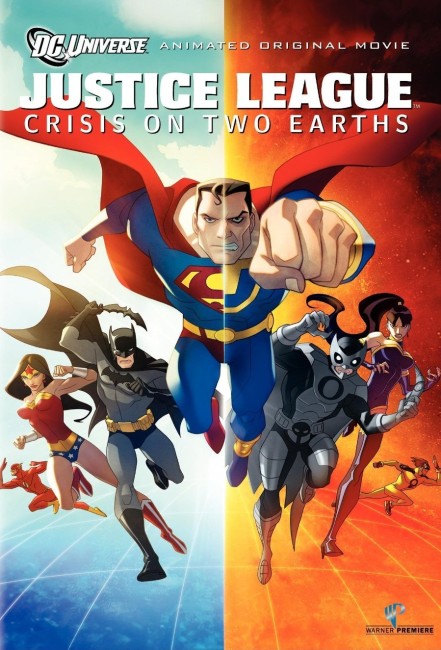 Lex Luthor and The Joker conduct a raid on a scientific facility to steal the Quantum Trigger. The Joker is killed but Luthor makes a getaway, activating the Trigger just before their super-powered nemeses arrive, allowing him to travel to a parallel universe. He arrives in Metropolis and walks into a police station, asking to speak to the Justice League, whereupon he is arrested. The Justice League arrive where Luthor explains that he comes from a parallel Earth where the counterparts of the Justice League are criminals that have banded together to form the Crime Syndicate and he and other villains are the superheroes fighting against them. He needs help defeating the Crime Syndicate from the tyranny in which they hold his world where they even force the US President to bow to their demands. After some debate, Superman, Wonder Woman, Green Lantern, The Flash and J’onn J’onnz agree to head to the parallel world. There they are immediately placed into a fierce battle against their villainous counterparts. Meanwhile, Owlman, this world’s counterpart of Batman, seeks the Quantum Trigger to launch a plan to find Earth Prime, the world from which every alternate world in the multiverse derives, and detonate a bomb that will destroy it and the multiverse.

The history of DC’s superhero titles is littered with numerous speculative issues, pendant series and spinoffs where various writers and artists have decided to mess around with the familiar and create what if scenarios and different takes on the familiar – in particular DC’s Elseworlds imprint, which include alternate ventures such as where Batman takes place in the 19th Century, is a pirate or becomes a vampire, where characters were reconceived in terms of German Expressionism, the Arthurian legends, fantasy worlds where they are magicians, where Superman grows up in the Soviet Union, or we get gender-reversed versions of Superman, Batman, Wonder Woman etc.

Earth 3 or the Anti-Matter Universe debuted in Justice League of America #29 in 1964 and was based around the concept of asking what if there was an alternate world where instead of becoming superheroes, the various members of the Justice League had become super-villains, known as The Crime Syndicate of America. Over the years, the various writers had fun returning to Earth 3 and elaborating out the various evil counterparts – Ultraman (Superman), Owlman (Batman), Superwoman (Wonder Woman), Johnny Quick (The Flash) and Archer (Green Arrow) and later building a team of superheroes based on reversals of the familiar super-villains from standard continuity, as well as constructing an alternate history for the world and characters.

Justice League: Crisis on Two Earths is not based on any specific Crime Syndicate story; it just draws on the idea to create its own story. It is somewhat disappointing in that given the usual brief (75 minute) running time of the DC animated films, the Anti-Matter Universe does not nearly get enough time in terms of back explanation. There is nothing given of its mirror-reversed history, nor the individual stories of the super-villains and how they differ from their standard continuity counterparts. Moreover, there are a good many super-villain characters running around in the background where we have no idea who they are unless we are familiar with DC continuity.

You get the feeling that the film was conceived as a Mirror Universe spin on the familiar – the concept that various science-fiction series conduct from time to time that began with Star Trek‘s Mirror Mirror (1966) and has turned up in other series such as Doctor Who (1963-89), Star Trek: Deep Space Nine (1992-9), Fringe (2008-13) and The Flash (2014– ) where we get evil counterparts of the well-known characters – but that not much has been construed in terms of rationale beyond the idea of seeing dark versions of the familiar characters. The title Crisis on Two Earths gives you the initial impression that the film is going to take on adapting Crisis on Infinite Earths (1986), the massive continuity rewrite that DC conducted to harmonise and modernise their various characters and splinter universes (which would certainly be an exceedingly ambitious idea that one would like to see Bruce Timm and co take on some day).

Certainly, the film kicks in well – we see what appears to be Lex Luthor and The Joker engaged in a robbery together, their being pursued before in an abrupt reversal their pursuers are revealed to be evil-looking versions of the DC superheroes. The film has undeniable fun with the various villains. We get to see a mean version of Superman who at one point slaps around the US President. There is also a wonderfully seductive version of Wonder Woman who abducts Batman and turns him into her plaything. Owlman also makes for a fascinatingly complex alternate take on Batman who becomes the real villain of the show during the climactic scenes.

If you suspect that Justice League: Crisis on Two Earths has a story that is too ambitious for itself, what you cannot deny is that the Bruce Timm team produce the superheroic action scenes they do so well. Immediately upon arriving on the alternate Earth, the film pits the Justice League against their counterparts and several Made Men in a knockdown battle that goes on for some ten minutes. Much of the film seems set up to get the various counterparts together for an even more massive climactic battle up against one another, at which the film succeeds most entertainingly.

Bruce Timm and co were clearly enamoured with alternate world takes on the Justice League and later returned to these in Justice League: Gods and Monsters (2015).