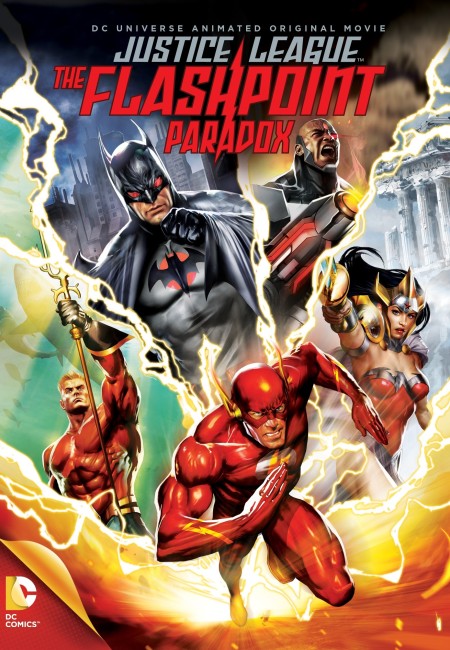 The Flash confronts a group of his most famous nemeses at the Flash Museum, finding that they have been brought together by Professor Zoom, the so-called Reverse Flash. The Justice League comes to The Flash’s aid and he escapes Professor Zoom’s trap. The next day, Barry wakes up to discover the world is very different – he no longer has his super-speed powers and his mother is still alive. Moreover, there is a war between Aquaman’s Atlantean forces and the Amazons led by Wonder Woman who have destroyed much of the world between them. Barry goes to Wayne Manor, hoping to gain the help of Batman, only to discover in this world that it was Bruce Wayne who was killed and his father Thomas Wayne who became Batman. With Batman’s help, Barry sets out to regain his superspeed powers by replicating his original experiment. He realises that Professor Zoom has somehow altered time by saving Barry’s mother from being killed and that this has had a ripple effect throughout the universe and drastically changed many of the familiar heroes and villains, leading them down very different paths. Even with his powers back, Barry finds he is unable to achieve the speed that he needs to travel back in time to change things because Professor Zoom is present and draining the Speed Force. The only solution as the world teeters towards total annihilation is for The Flash and Batman to unite the rest of this world’s superheroes to fight back.

The Flashpoint Paradox is based on a five-issue DC comic-book series Flashpoint (2011). (It was also followed by several spinoff issues devoted to telling the changed histories of individual characters within the alternative universe). More importantly, the end of Flashpoint, which has been excised from the film version, showed that the solution that The Flash creates in setting events back aright again ended up splitting off three different timelines. These became the basis of The New 52, which DC launched in 2011 wherein they rebooted all their titles (The New 52), merging the characters into an ongoing, unified continuity (something that is not particularly apparent in the on-screen version). The two subsequent animated Justice League films, Justice League: War and Justice League: Throne of Atlantis and many of the other DC Universe Original Animated Films, take place within the New 52 continuity. The Flashpoint Paradox storyline was later appropriated by tv’s The Flash (2014– ) and there was even talk of a live-action The Flashpoint Paradox film.

As a slimmed down version of Flashpoint‘s storyline, The Flashpoint Paradox ends up reminding of the DC Universe Original Animated Films’ second Justice League outing Crisis on Two Earths, which spun out an alternate universe based around the premise of what if the Justice League had become villains and the familiar villains heroes. The failing of Crisis on Two Earths was that almost nothing was placed into credibly establishing how such an alternate timeline had come into being. The Flashpoint Paradox remedies this is considerable depth, creating a world where almost every familiar DC Universe superhero and supporting character ends up taking a radically different path than the one we are familiar with.

The only complaint I would make is the film never makes clear how Nora Allen living as opposed to dying changes such things as an entire world war, the murder of the Wayne family or whether Hal Jordan is selected as Abin Sur’s successor. It is sort of justified towards the end where it is said that the saving of her life created ripples that moved backwards throughout time but this seems like magic wave of the wand justification. (The film also evades explaining how Professor Zoom made all of this happen).

Every so often, science-fiction tv shows like to do mirror universe stories where we encounter evil or distorted versions of familiar characters. The most notable of these is Star Trek‘s Mirror Mirror (1966), which has had several follow-ups through the various Star Trek spinoff series. Similarly, DC Comics is littered with these kinds of What If experiment, in particular their Elseworlds series that offers up often radical alternate versions of their superheroes such as Batman as a pirate or in the 19th Century, Superman raised in the Soviet Union, or the characters with genders reversed, not to mention the earlier alternate world the Anti-Matter Universe where the superheroes are the villains and the familiar villains have become heroes.

The pleasure of Justice League: The Flashpoint Paradox is seeing the ways in which the familiar characters are completely spun on their heads. The world has been wrecked in a war between Aquaman’s Atlantis and Wonder Woman’s Themyscira. We have a Batman who seems a relative analogue of the character we know – although there are disturbing aspects such as seeing him wield handguns and readily kill bad guys, that he has a drinking problem and that instead of Wayne Enterprises in this world we get Wayne Casinos – before this is revealed to be Thomas Wayne, Bruce’s father, and that it was Bruce as opposed to his parents who was shot in the alley. (Although the most disturbing aspect of this twist is the brief shot where we see Martha Wayne go insane and by implication become this world’s Joker).

Elsewhere, we see that Steve Trevor has fallen for Lois Lane who is now a spy in Amazon-occupied England; Lex Luthor is a good guy and serving in the US Navy; Cyborg has inherited Superman’s role and become an earnest boy scout. Hal Jordan has remained an Air Force pilot and did not receive the Green Lantern ring – here he is shown Abin Sur’s preserved corpse and craft kept in secrecy by the US military and asked to pilot it. (He goes into combat with the amusing cry of “Beware my power, asshole”).

Perhaps the most shocking of the changes is seeing this world’s Superman – having been captured by the US military since his craft hit Metropolis, we are first introduced to him as a pitifully cowering physical weakling where his first words are “help me.” After being brought out into yellow sunlight for the first time, accidentally incinerates a squad of soldiers with his newly discovered heat vision.

The Flashpoint Paradox works well as a film. It lacks the epic-sized action scenes that make so many of the other animated films memorable; what it plays on instead is the reversal and unexpected twists placed on the familiar. At which, especially in comparison to Crisis on Two Earths, it plays out with well written sophistication of ideas. There are times you feel the story has been overly cramped into an 81-minute running time, leaving aspects like just how Professor Zoom changed the past allowing Nora Allen to survive unexplained.

Certainly, director Jay Oliva takes the opportunity to push the violence envelope towards a more adult level and we get scenes where Wonder Woman beheads Aquaman’s wife Queen Mera and later kills a child, Superman massacres soldiers and slices off Aquaman’s arm with his heat vision and Aquaman batters Cyborg to death, tearing off his armour and getting ready to rip out his exposed heart.