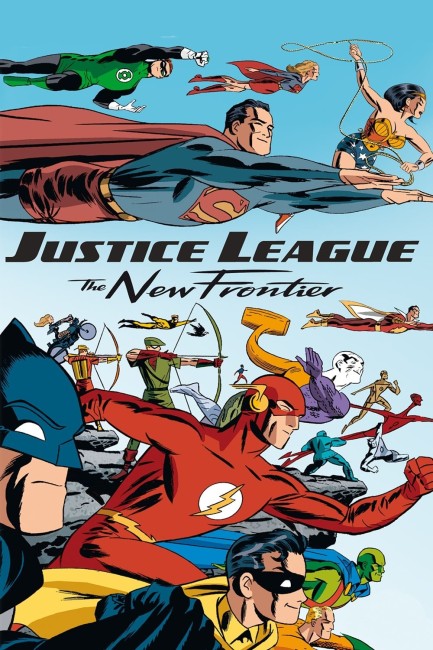 1953. Air Force pilot Hal Jordan returns to the US after service in the Korean War. He becomes increasingly more fearless in his activities for want of not being branded a coward because he refused to shoot down enemy planes. At the same time in Gotham City, the astronomer Dr Erdel accidentally teleports the Martian J’onn J’onnz to Earth via his telescope. However, the appearance of J’onn causes Dr Erdel to die in fright and J’onn is left stranded on Earth. J’onn is forced to shapeshift and disguise himself as human, eventually adopting the identity of the detective John Jones. He is puzzled by an entity known as The Centre that appears to be able to take over minds and is creating a worldwide cult. In the course of investigating The Centre, J’onn encounters Batman. Hal signs up as a test pilot at Ferris Industries where he finds that he is to pilot a rocket to land on Mars. Learning of this, J’onn attempts to sneak on board as the rocket is launched in order to return home but is captured by government agent King Faraday. After the Mars mission is destroyed in orbit and Hal saved by Superman, Hal is taken into the desert by the dying alien Abin Sur who bequeaths him a Green Lantern ring that allows him to wield vast energies by his willpower. As The Centre, a living island populated by dinosaurs, surfaces off Cape Canaveral, Hal, J’onn, The Flash, Superman, Wonder Woman and various other heroes come together to fight the menace.

Justice League/Justice League of America is one of DC Comics’ most popular superhero titles. The Justice League’s first appearance was in The Brave and the Bold #28 (1960). The idea was to bring together all of the headline superheroes at the DC stables – Superman, Batman, Wonder Woman, The Flash, Green Lantern, Aquaman and J’onn J’onnz the Martian Manhunter – in one story. The group soon gained their own comic-book with Justice League of America in 1961, which became one of DC’s most popular titles and continued under that name until the DC continuity shakeup with Crisis on Infinite Earths (1986). The complement of the Justice League has varied over the years, usually featuring (along with the abovementioned) characters like The Atom, Black Canary, Blue Beetle, Dr Fate, Elongated Man, Firestorm, Green Arrow, Hawkman and Hawkgirl, Ice, Plastic Man, Steel and Zatanna, among others.

Subsequent to Crisis on Infinite Earths, as with much of the DC line-up since, the Justice League has undergone a number of different revisions, most notably losing the America suffix and simply becoming the more internationalized Justice League (at one point, DC even experimented with a series of Justice Leagues for different parts of the world). Justice League was not the first superhero team-up – DC had previously created the Justice Society of America during the 1940s, featuring many of the same superheroes here. The popularity of Justice League inspired a host of other superhero team-ups. The most obvious of these was at DC’s rival Marvel Comics where Stan Lee was directly motivated by the success of the Justice League to create his own superhero team – the Fantastic Four. DC created other subsequent superhero teams such as the Legion of Superheroes, the Teen Titans and Birds of Prey, even teams of super-villains with the Secret Society of Super Villains and Suicide Squad, while a further team using various DC characters was created as the animated tv series Super Friends (1973-7) and over the other side of the street Marvel created other superhero teams such as the Fantastic Four, The Avengers and X-Men.

Justice League has been filmed before. There was a live-action tv pilot Justice League of America (1997), featuring The Atom, Fire, The Flash, Green Lantern, Ice and J’onn J’onnz (although not more high-profile members like Superman, Batman and Wonder Woman due to their media copyrights being held elsewhere). This is a shabby effort that badly misconstrues the characters. It was never aired but can be found circulating on various bit torrent sites. There has also been the earlier tv special Legend of the Superheroes (1979), featuring many DC heroes and villains, although this was never named as the Justice League and was conducted in the campily silly tone of the tv series Batman (1966-8). Justice League’s principal media incarnation was with the animated series Justice League/Justice League Unlimited (2001-6). This came from Bruce W. Timm and associates who had made the highly successful animated versions of Batman (1992-5) and Superman (1996-2000), as well as other DC-based series like Batman Beyond/Batman of the Future (1999-2001), Teen Titans (2003), Krypto the Superdog (2005) and Green Lantern: The Animated Series (2011-3) and a series of film spinoffs from the Batman and Superman series beginning with Batman: Mask of the Phantasm (1993). With the huge success of various live-action Marvel Comics superhero adaptations on the big screen in the 00s, a film adaptation Justice League: Mortal was announced under director George Miller of Mad Max fame. This eventually emerged under Zack Snyder with Batman V Superman: Dawn of Justice (2016)  culminating with Justice League (2017).

The film here is adapted from DC: The New Frontier (2003-4), a six-issue comic-book mini-series from artist/writer Darwyn Cooke. There Cooke dispensed with post-Crisis DC continuity and all the subsequent character retcons and took the various superheroes back to the Silver Age where they originated, carefully allowing each hero to appear both in the year and the artistic style that they were originally drawn. The New Frontier was clearly influenced by Alan Moore’s Watchmen (1986-7) with Darwyn Cooke integrating the superheroes against the real world socio-political backdrop of the era they came from, where they were often seen as influencing events, and the story showing their evolution across time into the characters that we are familiar with.

Justice League: The New Frontier will be confusing, especially to those who come to it after watching the animated Justice League or any of the other Bruce Timm series. The New Frontier dispenses with continuity to most of these. It is puzzling as the film opens, for instance, to see a film in the vein of tv’s Justice League but with a 1950s period setting and other incongruities such as hearing Lois Lane announced as a Wartime services radio broadcaster rather than the Daily Planet reporter she always is. The biggest confusion is surely in seeing the Hal Jordan incarnation of Green Lantern. Though Hal Jordan was the second and most famous incarnation of Green Lantern in the comic books, the animated series went with Hal Jordan’s African-American successor John Stewart in a desire to portray more ethnic diversity on the show. Also on the tv series, J’onn J’onnz had a completely different origin story, joining the Justice League during the course of a Martian invasion of Earth. There are other changes such as The Flash, who was always portrayed as cocky hothead and full of himself on the tv series, here seen as more traditionally square-set and heroic. Superman, Batman and Wonder Woman also get the older Silver Age costume designs rather than the more familiar ones. However, as one sinks into the changes and goes with The New Frontier‘s means of presenting them, the film develops quite a sophisticated story.

Justice League: The New Frontier principally focuses on the characters of Hal Jordan/Green Lantern and J’onn J’onnz the Martian Manhunter, telling their respective origin stories, and Barry Allen/The Flash (although we do not get his origin story). Superman, Batman and Wonder Woman are there as supporting characters – as they had their origins in the late 30s/early 40s, the logic presumably goes that they were established before The New Frontier‘s 1950s timeframe. There are appearances from many other characters of the era including Aquaman, Green Arrow, Robin, Ray Palmer (who becomes The Atom), the Blackhawk squad, Adam Strange, Will Magnus (the scientist creator of the Metal Men) and villains like Captain Cold, Gorilla Grodd and in one brief shot Lex Luthor, as well as a montage of still shots at the end showing a panoply of the heroes and villains that would come in the 1970s and beyond, along with other teams like the Teen Titans.

Justice League: The New Frontier works well. Much is clearly drawn from Watchmen and the idea of putting superheroes into the midst of real world political events and tracing the way their different outlooks evolve. The historical backdrop works well, although it is clear that Darwyn Cooke is much more socially optimistic than the British Alan Moore was in Watchmen. Although he touches upon persecutions of superheroes in the era of McCarthyism, the story joins the optimistic sweep of the era of John F. Kennedy’s White House (indeed, the term The New Frontier was coined in a Kennedy speech, which plays over the end of the film). On the minus side, the menace of The Centre is not well integrated into the story. There is no explanation of what it is, it only seems there as a threat against which the superheroes are united. There is also little explanation of the various possessions and cult activities that The Centre seems to inspire. The film comes in at a surprisingly brief 75 minute running time, which is disappointing as you wish some of the stories had been granted more time. As it is, the film has the feel of skipping between storylines and trying to condense them in order to tell as much as it can.

The action scenes are not quite up there with the epic scale that the same team’s Superman: Doomsday held. However, there are some exciting scenes with Hal Jordan and Rick Flagg fighting in the space vehicle and Superman rescuing Hal as the capsule burns up. The film gets itself together for a spectacular climax as The Centre rises off the coast of Cape Canaveral and all the superheroes are pitted up against it and a horde of dinosaurs, including some fabulous scenes as Hal and Dr Magnus fly into its maw to detonate atomic weaponry and where Hal comes into his Green Lantern powers and tows the entire mass of the island up into orbit with an energy sphere from his ring.

There is also a visually captivating opening where we have a deep voice (which it becomes apparent is that of The Centre) talking as the entire stretch of human history is painted before us in a series of beautifully stylised touches, culminating in a montage reminiscent of the bone-to-spaceship cut in 2001: A Space Odyssey (1968) that progresses through humanity’s use of weaponry as demonstrated by a fist holding a shard of stone that morphs into a spear, a knife and a rifle, as the voice comments “I, The Centre, have decided this sphere must be cleansed of them [humanity],” before the hand with the brush finally picks up a gun and turns it to the camera to shoot.