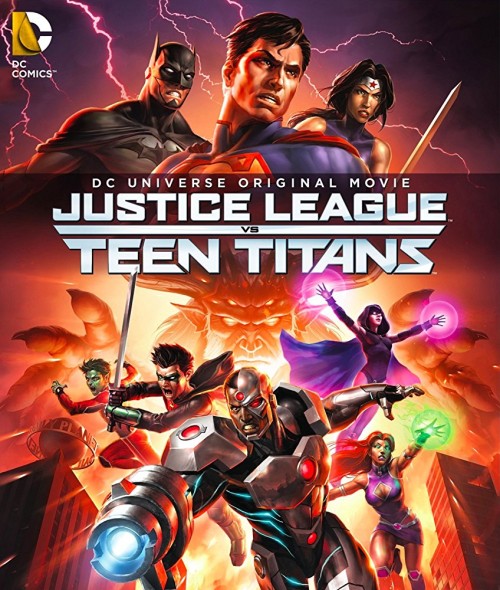 The Justice League are battling against The Legion of Doom. During the midst of the battle, it is found that Weather Wizard is possessed by the demon Trigon. As the Justice League battle against the demonic forces, Damian ignores Batman’s orders to stay on the sidelines and crashes the Batwing into Weather Wizard, defeating the demon. Not happy with Damian, Batman gets Nightwing to place him into the custody of the Teen Titans. Refusing to be a team player, Damian eventually begins to connect with the mysterious Raven who has magical powers. Meanwhile, Trigon possesses Superman. As the Teen Titans are dragged into combat with Trigon’s demonic minions, they learn of Raven’s past as the daughter of Trigon who fled to Earth after her father devastated her home planet of Azarath.

The Teen Titans are one of the numerous superhero teams that populate comic-books. Originally appearing in DC Comics in 1964, the group was pitched in terms of the idea of sidekicks like Robin, Wonder Girl, Aquaboy and Kid Flash coming together to form their own junior equivalent of the Justice League. The complement has changed over the years with a number of new heroes being created specific to the group. On screen, the Titans made an appearance in the animated The Superman/Aquaman Hour (1967-8) but did not get their own show until the animated tv series Teen Titans (2003-6), which had one film spinoff with Teen Titans: Trouble in Tokyo (2006), as well a revival series Teen Titans Go! (2013– ), which places more of a comedic spin on the characters and had two film spinoffs with Teen Titans Go! To the Movies (2018) and Teen Titans Go! Vs. Teen Titans (2019). They subsequently made their live-action debut in the tv series Titans (2018– ).

The first thing you think about when it comes to Justice League vs Teen Titans is what an incredibly crowded film it is going to end up being with two superheroic teams together on screen, not to mention that this also serves as an introductory story for one of the sets of characters. The film gets around this is several ways. Like several of the other DC Universe Original Animated Movies – Assault on Arkham, Throne of Atlantis, Justice League Dark – the headline name the film purports to be about acts as a bait and switch that serves to introduce the lesser-known superhero or team, which the film is then about. Principally what we have is a Teen Titans film with the Justice League serving as supporting cast – they turn up at regular intervals before everyone unites to defeat the Big Bad.

The film handles its introductory story well. The focus is placed on the Damian Wayne Robin, who has become a distinctive character in the DC Universe Original Animated Movies films since Son of Batman, as Batman sends him to the Titans to straighten him out. Damian has never been associated with the Titans (although both Dick Grayson/Nightwing and the Tim Drake Robin have) until the DC Rebirth storyline that came out several months after the film did. Moreover, Damian is immediately cast as a determined individualist who rejects the notion of team spirit, which puts his relationship with the rest of group into a position of conflict.

The film plays mix and match with the Titans line-up. The character that comes to the fore is the interestingly ambiguous one of Raven and much of the drama that forms the film is an exploration of her background. (This does give us the oddity of a film set in what is usually a science-fictional universe where the underlying rationale is a supernatural/occult one and the climax of the show involves various characters venturing down to Hell). There is also a post-credits scene that shows Terra flying towards the Teens headquarters, introducing her as the central character for the follow-up film Teen Titans: The Judas Contract (2017).

For what is essentially a gimmick film and given that the recent Justice League animated films have been leaving me feeling meh, I enjoyed Justice League vs Teen Titans more than I expected to. The characters and their conflicts work well. Less effective is the handling of the Justice League, especially the idea of a possessed Superman. Nevertheless, this works well when it comes to the superheroic action and proves a reasonable effort all around.