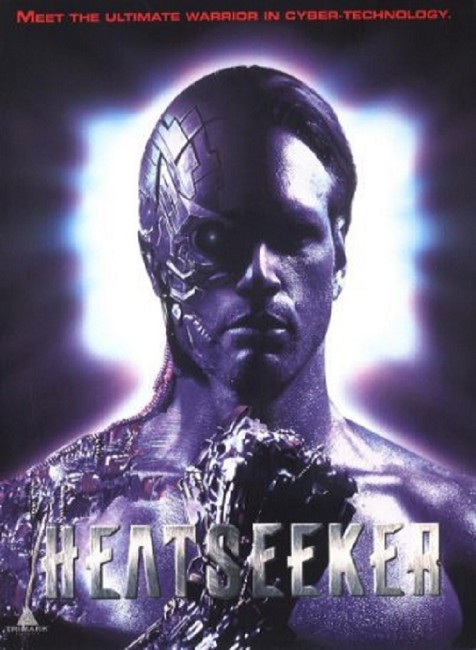 Tsui Tung, the CEO of the Sianon cybernetics corporation, announces an ambitious plan to regain the corporation’s dwindling market share by holding a world-televised kickboxing competition. The percentage of cyborg implants that contenders are allowed will be upped from the present 50% to 90%. Tsui Tung’s hopes are pinned on the previously defeated but now rebuilt Xao whom he intends to pit against the reigning champion Chance O’Brien, the only fully human competitor. However, O’Brien only wants to retire to be with his new wife, so Tsui Tung abducts her in order to force O’Brien to compete.

Albert Pyun is a prolific director of science-fiction and action hybrids. (See bottom of page for Albert Pyun’s other films). Heatseeker is one of Pyun’s cyborg films – see also Cyborg (1989), Nemesis (1993) and its three sequels, Knights (1993) and Omega Doom (1996). As with most of Pyun’s other cyborg films, the cyborg factor amounts to not much more than action supermen with a few protruding circuits showing.

Some of Albert Pyun’s films are occasionally capable of being more than the B sf/action hybrids they aspire to – notably Nemesis – but Heatseeker is one of his more tedious. Although Heatseeker is a competently enough made B-film, Pyun has sought to cut his costs by filming what looks like real kickboxing competition footage. Unfortunately, what he does not realise is that formalised competition sport filmed from a disinterested distance lacks any of the dramatic excitement of the action movie equivalent that artificially pumps the conflict up with slow-motion and closeup blows and tight focus on the sweating, snarling faces of the combatants. Nor is any attempt made to characterise the majority of the combatants. Pyun makes the mistake of allowing this action to take up nearly half the film and the results are tedium inducing – the equivalent of watching televised sport where one has no interest in the game.

Heatseeker is not up to much when it comes to the standard drama either. The title is of no relevance at all – with a name like Heatseeker one might at least have expected some reference to missiles. Keith Cooke’s kickboxing hero makes almost no distinction on the film whatsoever. Far more intriguing is frequent Pyun collaborator Norbert Weisser who makes for an interestingly obsessive corporate villain.

Tina Coté seems vacant and detached from proceedings. She is further lumbered by some deep-seated character confusions, which, considering that a good deal of the plot depends on them, add up to some strong uncertainty on the part of the film itself. Pyun and co-writer Christopher Borkagen seem unclear as to whether her actions in being directed to leave her husband behind and become the trainer/lover of his cyborg rival are being conducted by mind-control implant or by coerced choice. If her mind is being controlled by the implant, why does Norbert Weisser need to employ threats to obtain her cooperation? If she is being forced against her will then her lack of any emotional reaction to such a situation is almost impossible to believe.