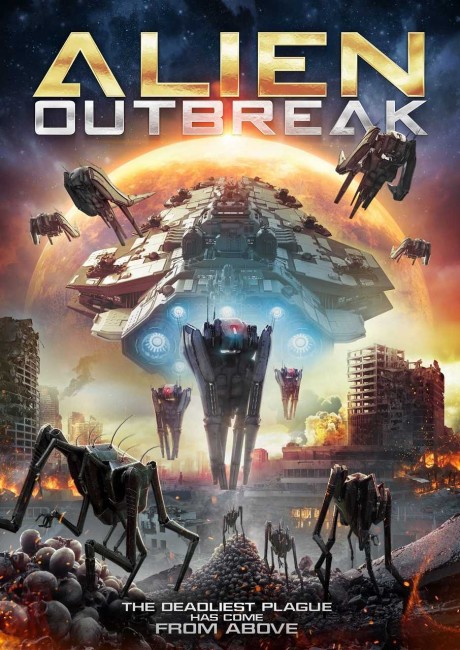 Zoe Norris is a Canadian immigrant working as a police sergeant in an isolated community in rural England. She is called out to deal with a farmer who has committed suicide. As Zoe talks to the dead man’s wife, the woman abruptly pulls a shotgun and shoots herself. Returning, Zoe is witness as another man stabs himself in the neck. An alien ship appears overhead and drops robotic drones that pursue her vehicle. She joins several fellow officers at the local pub . They and a handful of locals take refuge at the police station, fighting off the alien robots as they surround them, while dealing with the outbreak of madness that drives members of their group to kill themselves.

British director Neil Rowe has been working is visual effects since the mid-2000s. He, his wife Amanda and brother Ian between them made Robot World/Reconnoiter (2015), a clever little science-fiction film about a lone astronaut on an alien world inhabited by robot machines.

I was very impressed with what Neil Rowe managed to do with Robot World on the budget of a used shoestring, stripping everything down to one actor on screen and the rest relayed by effects and local landscapes. Alien Outbreak expands beyond that a little but is essentially the same – a half-dozen characters on screen but rarely more than 2-3 in a scene, an isolated rural locale and more dog-like robots.

The film gets a hold on you from early in in a series of short, sharp shocks – the woman (Peggy Salmon) mourning her husband who committed suicide who abruptly blows her head off with the shotgun the moment Katherine Drake turns her back; the man in the neighbouring farmhouse who rapidly stabs himself in the neck. All the while we see things only briefly glimpsed scuttling in the background before Katherine Drake is corralled by a series of hound-like robots dropped off by the alien ship that proceed to pursue her vehicle down a country road.

Neil Rowe develops a good deal of tension out of the various characters on the run and at siege in the pub and police station from the robots, as well as what would appear to be their strange alien handlers that look like marionettes of phantom figures some thirty feet tall. As before in Robot World, Rowe himself provides some excellent effects.

The plot reveals itself as a mix of alien invasion film and a mass insanity outbreak film along the lines of The Crazies (1973). The end has a twist that reveals that this is not quite the case but in effect this is the way the film operates for the bulk of its running time. The twist is mildly interesting but you cannot help but feel that it needed far more development than it gets in order to work more effectively.