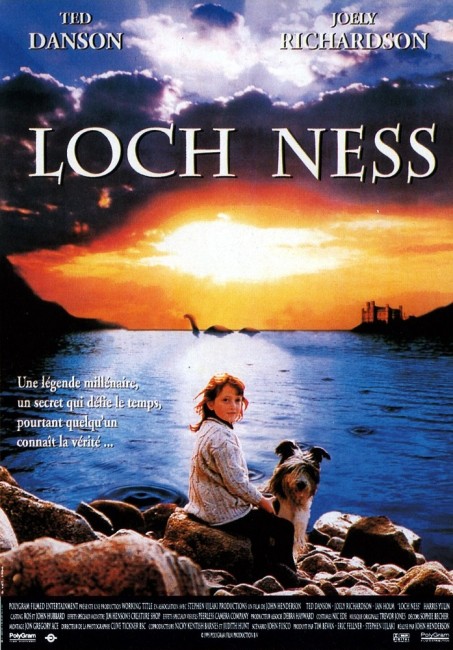 Zoologist Jonathan Dempsey is burned out after a search for Bigfoot that went disastrously and ended in his ridicule. He is ordered by his department head to go to Scotland and take over an investigation into the existence of the Loch Ness monster after the previous researcher falls dead. As his team begin sounding the Loch, Dempsey becomes involved with Laura McFeteridge, owner of the local inn where he is staying. As Jonathan begins to accrue evidence that the monster might exist, he realises that its existence is a secret that the locals are protecting. This is something that leaves him divided between his scientific duty and the locals’ desire to protect the monster from curiosity seekers.

The Loch Ness Monster legend is something that has appeared sporadically on film but never with any particular success. There have been the likes of The Secret of the Loch (1934), Larry Buchanan’s cheap The Loch Ness Horror (1982), the German-made Nessie (1995), Beneath Loch Ness (2001), the amusing mockumentary Incident at Loch Ness (2004), The Water Horse (2007), Beyond Loch Ness (2008), even episodes of tv series such as The Saint (1962-9). The most bizarre variation was the Doctor Who episode Terror of the Zygons (1975), which revealed that the monster was in fact a giant robot being manipulated by shape-changing aliens disguised as the local Scottish gentry. The most amusing was Amazon Women of the Moon (1987), which contained a skit parodying Ripley’s Believe It Or Not that asked the question “Was the Loch Ness Monster Really Jack the Ripper?” {For a more detailed overview see Films About the Loch Ness Monster}.

Loch Ness is an A-budget attempt to delve into the legend. Needless to say, Loch Ness would never have emerged had it not been for the success of Jurassic Park (1993). Loch Ness seeks to follow in Jurassic Park‘s pawprints in all ways – it is a dinosaur film; it takes a sympathetic, environmentally-conscious attitude toward its monster; and it harnesses top-drawer CGI technology toward the presentation of its creature. [It was followed a few years later by a further attempt to create a CGI Loch Ness monster film with The Water Horse (2007)].

And Loch Ness is also no good. Where Jurassic Park offered breathlessly spectacular dinosaur sequences, Loch Ness substitutes romance. In fact, the romance between Ted Danson and Joely Richardson is at the forefront of the film – there is more time spent on this than there is on the Loch Ness monster. When it comes to the monster, the film’s premise is an obvious one – the only issue Loch Ness has on offer is “Is it going to provide a monster or not?” and that is an answer that is surely already provided by anyone observant enough to look at the film’s poster and see the companies listed for Creature and Visual Effects.

When the film does eventually get around to providing Loch Ness monsters, they are incredible disappointing. Technically, they are impressive – what we see of them, they appear incredibly lifelike. However, they only appear on screen for a single scene and then briefly seen swimming underwater at the very end. The total time given over to their appearance would be under two minutes – a huge disappointment upon the film’s promise.

Perhaps the biggest disappointment of Loch Ness is its failure of spirit. It is a halfway reasonable film right up until the ending. There it runs away from dealing with any of the questions raised and proceeds to hide behind a trendy endangered species message. The happy ending wrap up with Ted Danson throwing everything away and allowing himself to become a laughing stock and returning to Joely Richardson’s arms is utterly frustrating in its sheer niceness. The script’s resorting to cliches about protecting the monster from the probing scalpels of science is ultimately a shrill moral message and an intellectually conservative stance – after all, the majority of endangered species in the world are ones whose existence is strongly advocated by concerned scientists and environmentalists, not seen as an opportunity to dissect them.

Director John Henderson began as a writer and then director on British comedy shows such as Not the Nine O’Clock News, Spitting Image and Sticky Moments. He directed various fantasy-related tv mini-series and movies such as The Borrowers (1993), Jack and the Beanstalk (1998), Alice Through the Looking Glass (1998), The Magical Land of the Leprechauns (1999), the Comic Relief spoof special Doctor Who and the Curse of the Fatal Death (1999), the space opera tv comedy Hyperdrive (2006-7) and the talking animals adventure Tales of the Riverbank (2008). Henderson returned to the subject of endangered monsters with the film Me-Shee: The Water Giant (2005).