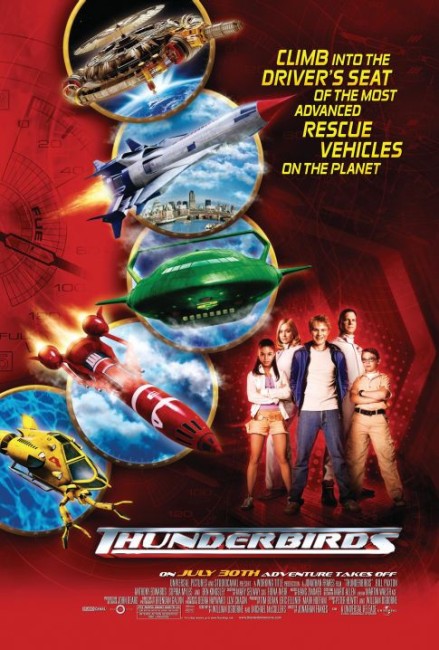 Alan Tracy is the youngest of the five sons of billionaire and former astronaut Jeff Tracy. The rest of the family operate as International Rescue, flying from the secrecy of their private island to solve various disasters around the world in the fabulous high-tech flying machines that have been nicknamed the Thunderbirds. Alan longs to fly with the others but is constantly being held back by his father. The super-criminal known as The Hood then fires a missile at the orbiting Thunderbird 5. As Jeff and the other brothers fly to the rescue, The Hood invades and takes over Tracy Island, planning to steal the Thunderbirds and use them to rob banks around the world. However, Alan, remains free, along with Fermat, the son of the Tracy’s technical genius Brains, and Tintin, the daughter of the Tracy’s servant. It becomes up to them to stop The Hood’s attempt to steal the Thunderbirds.

Gerry Anderson is a cult figure to many people who grew up in the 1960s and 70s. Gerry Anderson was responsible for puppet shows such as Torchy the Battery Boy (1957), The Adventures of Twizzle (1958), Four Feather Falls (1960), Supercar (1961-2), Fireball XL5 (1961-2), Stingray (1963-4), Thunderbirds (1965-6), Captain Scarlet and the Mysterons (1967), Joe 90 (1968) and The Secret Service (1969). Indeed, reruns of the Gerry Anderson shows were a crucial part of this author’s young years. The appeal of Gerry Anderson shows was the combination of puppets, highly detailed models and, of course, the techno-fantasy element – the fascination with machinery moving into action and being blown up, the endless countdowns and doubletalk – “F.A.B.”, “Spectrum is Green” – and so on. All of the Gerry Anderson shows exist a single cult but the clear favourite among these is Thunderbirds, which proved a big transatlantic hit when it originally aired. Thunderbirds was also spun off into two theatrical movies Thunderbirds Are Go (1966) and Thunderbird 6 (1968).

Prior to release, there was so much about the Thunderbirds film that seemed exciting beyond belief for fans of the original. The pre-release photos of the Thunderbirds models were known to have grown fanboys drooling in anticipation – it is not a pretty sight but I did witness it. Advance trailers looked promising and one could think of no other actor in the world better physically suited to the part of The Hood than Ben Kingsley.

It is clear when one sits down to watch Thunderbirds that an enormous degree of care and attention has gone into recreating the original up on screen. The production design team do a stunning job of technologically upgrading the Thunderbirds, while also remaining completely faithful to the original designs. Every detail of the series has been authentically created – the palm trees fold down for the launch of Thunderbird 2, the pool slides back for Thunderbird 1, Lady Penelope gets exact recreations of the hairstyles and costumes of her puppet counterpart, her teapot bleeps when Jeff calls, there are minor characters like Kyrano and Tintin, a stuttering Brains, the portraits of the boys on the walls swivel to reveal chutes leading down to the launch hangar and so on. The production designers have even faithfully recreated the 1960s Streamline Moderne design of the house on Tracy Island and its furnishings.

Okay, so one or two minor details are changed – Bill Paxton’s Jeff Tracy is not wheelchair bound (largely for reasons of plot convenience), The Hood doesn’t get to adopt any disguises and somehow gains psychic powers, Brains gets a son and most of all the pink Rolls-Royce is not a Rolls anymore but a Thunderbird (largely because the current owners of Rolls-Royce were too mean-spirited to lease usage of the brand name to the filmmakers). However, in almost every way the original Thunderbirds has been recreated up there on the big screen and in ways that make you shiver at seeing all the familiar touches falling into place.

Having spent such enormous effort (and clearly money) bringing all the elements of the tv series to life, why does Thunderbirds proceed to miss everything by a mile? It is saddening to see everything fall flat in such a disastrous way – it is an even less pretty sight seeing grown fanboys reduced to tears. The failing all comes as a result of the choice to play Thunderbirds as a kid’s movie. No particular crime to this – after all, the original tv series and films were pitched to children. Rather, the problem is more the case that the original has been bent out of shape to make the film fit the modern American children’s movie formula. Thus Thunderbirds ends up a schizoid project that feels as though it emerged out of a tug-of-war between two different creative forces – one trying to make a faithful recreation of the original and sell it to the nostalgia crowd; the other having decided that no adults would be interested and having rewritten it all to sell to the youth market. Not unexpectedly, in due a large part to an uncertain promotional campaign that drove the nostalgia audience away by concentrating on the kids who were not that familiar with the reruns, Thunderbirds died at the box-office.

Seeing Thunderbirds fail makes you want to cry. After expending great expense to bring the original to life in fabulous detail, Thunderbirds then unforgivably pushes all the characters that were the heroes of the original out of the way. The main characters of the tv series, the Tracy Brothers (excepting Alan) and the father, are isolated on Thunderbird 5 and almost entirely written out for the duration of the show – in fact, they get so little screen time that we are never even introduced to half of them by name. Instead, the show is taken over by kids where we get the adolescent Alan (who is now cast as being about twelve years old), accompanied by Tintin, a minor supporting character in the original series who is now pumped up into a kickass girl heroine with psychic powers, and the entirely new character of Brains’s son Fermat.

One reviewer made the pertinent observation that what we have is less Thunderbirds than it is an attempt to create a triptych of characters that closely model the children in the Harry Potter films. Indeed, while the tv series is set around the Thunderbirds conducting various hi-tech rescue operations, this is marginalised in the film – there are a couple of rescue operations at either end of the show but the majority of the film is about the kids running around the island. Here there are various silly slapstick scenes with kids fleeing down slides, spraying heavies in goop, escaping in anti-grav sleds and firing hornet’s nests at villains. Indeed, what we now have is not Thunderbirds but Home Alone (1990) with big green rocketships.

Direction of the film was handed to Jonathan Frakes. Jonathan Frakes came to fame as Commander Will Riker in tv’s Star Trek: The Next Generation (1987-94). Frakes subsequently parlayed his clout as a lead on the show into getting several directorial assignments on the various modern Star Trek series before branching out onto the big screen as director with respectively the second and third Next Generation films, Star Trek: First Contact (1996) and Star Trek: Insurrection (1998). Frakes then went onto direct the children’s film Clockstoppers (2002) about a device that can speed up/slow down time. However, the disaster of Thunderbirds scuppered Jonathan Frakes’ career as a cinematic director so much so that the next directorial gigs he could only get were tv movies like The Librarian: Return to King Solomon’s Mines (2006) and The Librarian: The Curse of the Judas Chalice (2008) and episodes of various tv series.

As an actor, Jonathan Frakes has a warm presence and in all the interviews I have seen with him, he comes across as a very funny guy and I am sure I would like him in real life. However, I do hate to break it to him that making children’s films is just not his cup of tea. Frakes’ two Star Trek films remain the only two watchable efforts amid the otherwise lamentable Next Generation screen outings but when it comes to his children’s films – Clockstoppers and Thunderbirds – Frakes does not have the touch. These films comes with a sense of adults forcedly trying to be cool and create child-like fun – skateboards, goo fights. And when it comes to the slapstick action, Frakes cannot direct in a way that seems funny or even fun.

The worst part about Thunderbirds is not even the excruciating kid’s audience pandering, which is bad enough, but the way that the film tries to be cutsie and wink to the adult audiences. There are numerous gags aimed at the tv series – The Hood makes lines like “I could make you walk like a puppet on a string” and when he hypnotizes Brains, Anthony Edwards starts walking with the unmistakeable gait of an Anderson puppet. When Thunderbird 1 launches and we see the hands on the controls we get a momentary shot of wires holding them – an in-joke in that in the original tv series when it came to closeups of hands, the Andersons always cut to closeups of human hands. Sophia Myles and Ron Cook make a far too tongue-in-cheek Lady Penelope and Parker – she seems to have modelled her performance on Kate Winslet and looks all of about the age of eighteen. The worst part is a fight scene where Jonathan Frakes has Lady Penelope, Parker and the various minions doing numerous martial arts moves, which are played a maximum of silliness and accompanied by slapstick sound effects – something that shows that Frakes is not taking the proceedings seriously at all.

The original series had a sense of humour but it always focused on the dramatic. The movie has paid scant regard to the dramatic – light escapades and a series of rescues that seemed designed more to highlight the various models than anything else – while the rest of the time it loudly announces to its adult audience that it isn’t taking any of it seriously. Jonathan Frakes’s Next Generation films were an object lesson in taking a tv show that had a substantial fan base and creating it up on the big-screen without pandering down to kids or not taking it seriously – it is a mystery as to why Frakes managed to lose his touch with Thunderbirds. Wisely, Gerry Anderson disavowed any interest in involvement in the film and that says all there is to say about Thunderbirds.