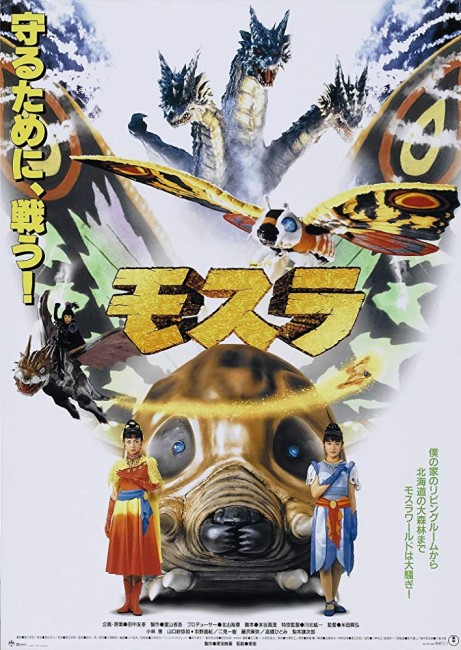 Yoiji Goto is foreman for the Houkoko Company’s logging operation in Hokkaido. They uncover a strange amulet buried in a rock on the mountainside. Goto brings the amulet home for his young daughter Wakaba. Immediately after, the house comes under attack by the miniature witch Belvera who is determined to obtain the amulet. The miniature twin sisters Moll and Lora, the guardians of Mothra, appear and fight off Belvera, explaining that the amulet is the Seal of Ilias, which imprisons the three-headed monster alien Desghidorah whose arrival on Earth millions of years ago destroyed the dinosaurs. Desghidorah now emerges and starts rampaging, while Belvera tries to use the seal to control it for her own purposes. The twin sisters’ only hope is to call up Mothra. However, Mothra is getting old and is mortally wounded in the battle with Desghidorah. That leaves only the larval form of Mothra’s children to enter the combat and defeat Desghidorah before it sucks up all the oxygen.

Mothra is the most famous of Toho’s Japanese monster movie next to Godzilla. Mothra first appeared in her own film Mothra (1962) and was quickly pitted up against Godzilla in Godzilla vs the Thing (1964) and thereafter became a regular fixture of Toho’s classic monster bashes in the likes of Ghidrah the Three-Headed Monster (1964), Godzilla Vs the Sea Monster (1966) and Destroy All Monsters (1968).

In the 1990s, Toho began the process of reviving Godzilla and pitting him up against many of the classic monsters from the 1960s and 70s, albeit worked over with far better modern animatronic and later CGI effects. Amidst this, the Godzilla and Mothra match was reimagined in Godzilla and Mothra: The Battle for Earth (1992). This proved sufficiently successful for Toho to then revive Mothra in three standalone films beginning with Rebirth of Mothra here and continuing through Rebirth of Mothra II (1997) and Rebirth of Mothra III (1998). Mothra has also appeared in several of the other modern Godzilla films with Godzilla vs Space Godzilla (1994), Godzilla, Mothra and King Ghidorah: Giant Monsters All-Out Attack (2001), Godzilla: Tokyo SOS (2003) and Godzilla: Final Wars (2004). Mothra also appears in the US-made Godzilla, King of the Monsters (2019).

Mothra is one of the more original Japanese movie monsters and has much potential. Alas, much of this film is played down at a juvenile level. The scenes early in the show with the cackling witch (a badly overacting Aki Hano) and two twin sisters chasing each other around the house on the backs of miniature flying creatures, where everything is played as a slapstick caper that delights in smashing things, reduces Rebirth of Mothra to the type of silly children’s film that typified the nadir of the classic Godzilla cycle – most notably, Godzilla’s Revenge (1969).

This pitch to the children’s demographic makes for an utterly inane effort – the two twin sisters, an embodiment of ethereal elegance in all the other films, are turned into childish figures, they at one point riding on a kite after their miniature moth is disabled. Moreover, the film is majorly killed off by bad dubbing – the sort of inexpressive voices that have no feel for the characters and dialogue they are saying that used to typify cheap 1980s international video imports.

Indeed, in being played down so much to the children’s movie demographic, what we have seems more like a pure fantasy film that a kaiju eiga, which always existed in the nominal realms of science-fiction – now involving witches, magic amulets, fairies and dragons. Mothra also gets powers that she does not have in the other films – the ability to fire raybreams from her forehead, even to release flocks of glowing birds and at the climax coalesce a beam of what would seem to be cosmic energy down from the heavens against Desghidorah by flying rings around it.

Pro-environmental themes run many Japanese monster movies and are stronger here than in almost any other – the father (Kenjiro Nashimoto) works for a logging company that is seen as despoiling the landscape, the bad monster of the show is identified with oxygen depletion, while at the end Mothra moves across the land weaving a magic spell that instantly restores the trees and nature.

The film certainly becomes more watchable once we get to the scenes of Mothra and the rampaging Desghidorah fighting. Here the Toho effects team turn out some entertaining scenes with Desghidorah whipping Mothra around with her wing in one of its mouths or the larvae spraying Desghidorah with goo. Desghidorah looks like Toho cut costs by reusing the three-headed Ghidorah costume from one of their previous Godzilla films – the name implies it is intended as a relative of sorts. Mothra is a decent creation, although the design is ruined by its having been outfitted with a series of fat, stubby furred chicken legs. The Mothra larvae, which always looked like oversized turds in the past, get a reasonable work over.

The main problem is that while the second half lacks the inane childish humour of the first half, nothing much happens once we get past the battle between Mothra and Desghidorah – after Mothra is mortally wounded, we get long drawn out scenes with her dying and the larvae on the march, which are intercut with extruded pieces of human drama about the oxygen depletion caused by Deghidorah and the parents having to save the children from a lava flow. Its effect scenes aside, this is one of the worst among the mostly worthwhile Japanese monster movie revivals of the 1990s.