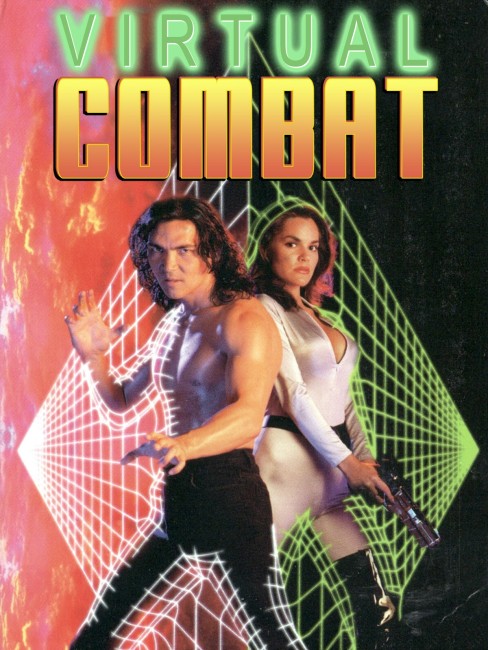 Dr Lawrence Cameron perfects a process whereby he can clone characters from virtual reality simulations into flesh and blood bodies. He incarnates two women from virtual sex programs but then the process is taken over by Dante, the character from the tenth and most impossible level of a virtual combat program, who uses it to emerge into the real world. Businessman Jason Burroughs takes the clones over the border from the Las Vegas grid into Los Angeles. When gridrunner police officer John Gibson is killed by Dante, his partner David Quarry heads to the Los Angeles grid to stop Dante.

Has there ever been a film with the word ‘virtual’ in its title that has been any good? One certain thing is that Virtual Combat would have to be one of the worst. It was made by Andrew Stevens, an actor in films like The Fury (1978), The Seduction (1982), Night Eyes (1990) and Red Blooded American Girl (1990). In the last decade, Stevens has also become a director of B movies such as The Terror Within II (1990), Night Eyes 3 (1993), Illicit Dreams (1994), Subliminal Seduction/Flash Frame (1996) and Crash Dive (1996) and producer of a great many more primarily action and erotic B-budget films under the Royal Oaks banner.

Virtual Combat is a sf/martial arts movie. It closely resembles the same year’s equally braindead Virtuosity (1995). Virtual Combat could easily have been intended as a cheap ripoff of that except for the fact that Virtuosity was not a particularly big hit. Nevertheless, both films feature a process that allows a villain from a virtual combat simulation to be incarnated in an artificial body who then goes amok while being hunted by a lone cop.

Virtual Combat is an incredibly stupid film. It has only been construed as a martial arts movie. World kickboxing champion Don ‘The Dragon’ Wilson makes a great many of these martial arts films down at the lower end of the video-released market during this period. The film takes any opportunity at all to throw in a martial arts sequence – the two virtual sex girls even turn into expert martial artists once made flesh.

Some parts are ludicrous – like where the two imprisoned girls contrive to hook the keys off the belt of a guard underneath a door using merely a whip. There is one moment the film seems that it might be heading in a more promising direction – where a virtual sex girl made flesh starts coming onto Don ‘The Dragon’ Wilson because she doesn’t know any other way of acting. However, the film is disinterested in exploring this and quickly returns to more martial arts.