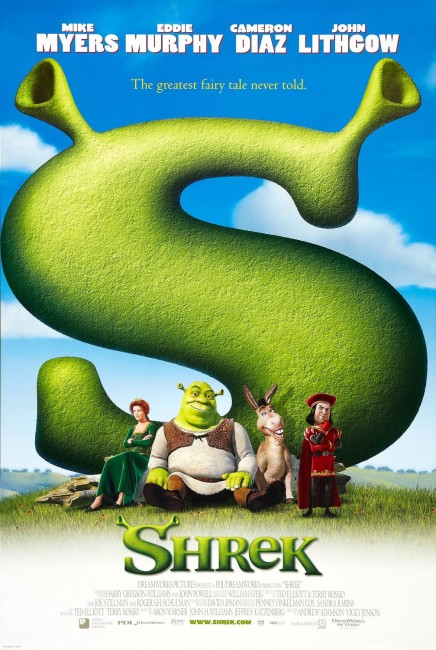 The ogre Shrek’s idyll in his swamp is suddenly overturned by the arrival of various fairy-tale creatures who have been banished from the kingdom of Duloc by Lord Farquaad. Accompanied by a talking donkey, Shrek goes to sort out Farquaad. Farquaad desires to become the rightful ruler of the kingdom and the only way he has of doing so is by marrying a princess – the one he chooses is the Princess Fiona who is imprisoned in a castle that is guarded by a lava ravine and a dragon. Shrek arrives, only to inadvertently defeat all those competing to be Farquaad’s champion to rescue Fiona. Farquaad agrees to remove the fairytale creatures from Shrek’s swamp if Shrek will rescue the princess. Shrek and the donkey journey to the castle and succeed in overcoming the dragon. Having saved Fiona, the reclusive Shrek and the princess find themselves becoming attracted to one another on the journey back. However, she harbours a secret.

The challenge with each animated film these days, Disney or otherwise, is to push the artistic boundaries of what has gone before. Like Disney’s Dinosaur (2000), Shrek leaps out beyond the tentative steps of the first CGI feature Toy Story (1995) with a stunning degree of virtual realism in its computer-animation. The depth of field in some of the background shots or the sudden view down the ravine into the lava flow have a breathtaking clarity. The sets are designed with remarkable three-dimensional detail – the tournament court and the castle where the princess is held are designed with a depth and better used than the sets in many live-action films. Few people realise the remarkable quality of detail that has gone into the film – little touches like the naturalistic way the donkey’s fur ripples, or the leaves on the tree rustling in the breeze and the sparks rising from the fire.

Of course, what makes Shrek is the wit and the sly asides it makes in the direction of other fairytales. All manner of fairytale characters make appearances – the Three Bears, Pinocchio, Snow White, The Seven Dwarfs and the Magic Mirror, the Big Bad Wolf, the gingerbread man and a bizarre incarnation of Robin Hood as a French seducer Monsieur Hood. Shrek is nearly worth the price of admission for the hilarious final scene with all the fairytale characters engaged in a rock’n’roll number.

The screenplay comes from Ted Elliott and Terry Rossio, who also wrote DreamWorks’ The Road to El Dorado and Disney’s Aladdin (1992), which had a similarly irreverent and anachronistic attitude towards its source. There are a good many modern asides – with Shrek’s defeating of his opponents at the tournament suddenly turning into a WWF wrestling match and one hilarious throwaway gag that parodies The Matrix (1999) Bullet Time martial arts. Like A Knight’s Tale (2001), released at exactly the same time as Shrek, the film comes packed with jarringly anachronistic modern rock songs (something that is going to date the film in a few years time).

This aside, the script is quite delightful in its puncturing of fairytale cliches – like the donkey’s succeeding in overcoming the dragon by wooing it, or Shrek’s failing to quite fulfil the princess’s romantic expectations of her rescuer. The central character arcs are easy and predictable, but Shrek is constantly charming. The film’s sense of humour is positively hilarious, especially the wonderfully silly throwaway gags that come during Shrek and the princess’s courtship, there being one particularly hilarious one involving animal balloons. The stars cast in the four central voice performances deliver some of their most engaging work.

Shrek 2 (2004) was a sequel, featuring a return appearance from co-director Andrew Adamson and most of the voice cast, but this disappointingly amplified the fairytale parody and contemporary gags to the point of overkill. The series was continued with Shrek the Third (2007) and Shrek Forever After (2010). There have been a number of other spinoffs such as Shrek 4D (2003), a 12-minute 3D short designed as part of the Universal Studios tour, the Christmas tv special Shrek the Halls (2007) and the theatrical film Puss in Boots (2011). In 2002, Shrek became the first film to win the newly instituted Academy Award for Best Animated Film.