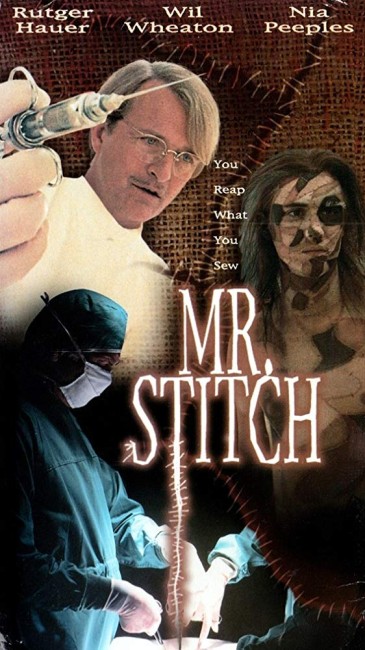 Dr Rue Wakeman brings to life a creature that he has stitched together in a patchwork skin made up of parts taken from 88 different bodies – 44 men and 44 women. The creature, known only as Experiment No 3, gradually comes to an awareness of the world around it and demonstrates a penetrating desire to understand more. It soon starts to assert its own individuality, choosing a male identity and the name Lazarus. Lazarus is troubled by flashes of memory from the various component bodies, although Wakeman dismisses this as impossible. However, when psychologist Elizabeth English is brought in to help Lazarus, she realises that he is having memories that come from her late lover Frederick Taxarian, a scientist on the project. When Wakeman sees that Elizabeth is bonding with Lazarus, he takes her off the project. Angered at this and drawn by his feelings for Elizabeth, Lazarus breaks out of the laboratory to find her.

Roger Avary first came to attention as Quentin Tarantino’s co-writer on Pulp Fiction (1994). Avary and Tarantino had been employees in the same California videostore and often swapped stories and ideas. (Avary also wrote some background dialogue for Reservoir Dogs [1992] and reportedly contributed to Tarantino’s script for True Romance [1993]). The Pulp Fiction credit/Tarantino association (his sole screen credit to that point) was enough for Roger Avary to be given the opportunity to direct the Tarantino exec produced Killing Zoe (1994), a somewhat pretentious heist film in the Tarantino mould, which did gain a minor cult following at the time it came out. Avary followed Killing Zoe up with Mr. Stitch. Subsequently, Avary went on to direct The Rules of Attraction (2002), Glitterati (2004) and Glamorama (2006), all based around the works of Bret Easton Ellis, and wrote the scripts for Christophe Gans’ horror/videogame adaptation Silent Hill (2006) and Robert Zemeckis’s Beowulf (2007). After an absence from screens for a jail term in the 2010s for involuntary vehicular manslaughter, Avary returned to screens as the writer/director of the crime film Lucky Day (2019).

Where most other versions of the Frankenstein story quickly head into horror territory with the monster escaping and threatening its creator, before bringing both to their doom, Roger Avary takes Mr. Stitch closer to the philosophical questions that occupy Mary Shelley’s novel. The first half of Mr. Stitch contains some intriguing scenes where Avary focuses on the creature’s growing self-awareness and questioning of its creator. Here Avary dispenses with any horror movie affect or classical mad scientist laboratory setting – almost the entire first half of Mr. Stitch literally takes place on a blank stage and concerns the creature’s growing self-awareness. (By comparison, this aspect is usually granted only one or two scenes in other films and not that much more in Mary Shelley’s book).

Roger Avary certainly adds some interesting twists to the story – the creature being born with no sex organs and composed of parts taken half from men and half from women and it having to choose a masculine identity; it starting to regain memories from its host parts (an aspect that perhaps could have been developed further); while the memory flashbacks offer a unique take on why the creature develops an obsessive relationship with Elizabeth. There is also a scene where the creature, with very postmodern effect, compares himself by reading the Frankenstein novel (1818).

Roger Avary has cast his equivalent of the Frankenstein monster with Wil Wheaton. Wil Wheaton, best known as the precocious Wesley Crusher on the first few seasons of Star Trek: The Next Generation (1987-94), is not exactly the figure one thinks of when it comes to the Frankenstein monster. This is traditionally a part that has been cast with tall or physically bulky actors – Boris Karloff, Christopher Lee, Lon Chaney Jr, Glenn Strange, Dave Prowse, Randy Quaid etc – with the costume often tweaked to make them seem larger still. On the other hand, Wil Wheaton is of slim build and not at all bulky, which certainly makes for a different creature. Cult makeup artist Tom Savini conducts a superb and visually striking makeup job that turns every inch of Wil Wheaton’s skin into something like a patchwork jigsaw puzzle with each piece a different colour.

What is unique about Mr. Stitch is Roger Avary’s production design scheme. It is as though the standard Frankenstein laboratory has been relocated on the prison set for George Lucas’s THX 1138 (1971), situated in a shadowless void of blinding white-on-white. The only things that fill this space are peculiar objects that seem like laboratory equipment designed by an abstract artist – a tv camera that is a giant floating eyeball; an eye-shaped door; Wil Wheaton’s black oval-shaped fold-up bed; instruments and clipboards constructed like pieces of surreal vacuform art; another laboratory where we see removed hearts, lungs and spinal columns, all breathing and pulsating while attached to wires, even a brain sitting in a dish and still attached to an open skull.

In the end, Mr. Stitch is a film that is more ambitious than one that fully succeeds. On the minus side, all the arty abstraction tends to work against the film. It is 45 minutes (half the running time) before we get out of the laboratory into the outside world and at such length the white visual scheme becomes monotonous – George Lucas by contrast gave us less than 10 minutes of whiteness in THX 1138. The conversations that take place there have a nicely cool disquiet but these become tiring.

Once we do get outside, Roger Avary abruptly throws in a series of car chases. These consist of some not very well directed scenes with Wil Wheaton being chased by guards in dune buggies, which come with silly effects such as animated skulls appearing in the dust cloud of an explosion. The reconciliation with Elizabeth is not granted the time it needs, before Roger Avary wraps the film up with a variation on the standard scene where the laboratory is blown up – although here the monster uncaps a vial of germ warfare bugs and takes the military that are backing the experiment down with him. Here we see that the villain has been updated from being a scientist defying divine provenance to the contemporary bogeyman of a corrupt military conspiracy.