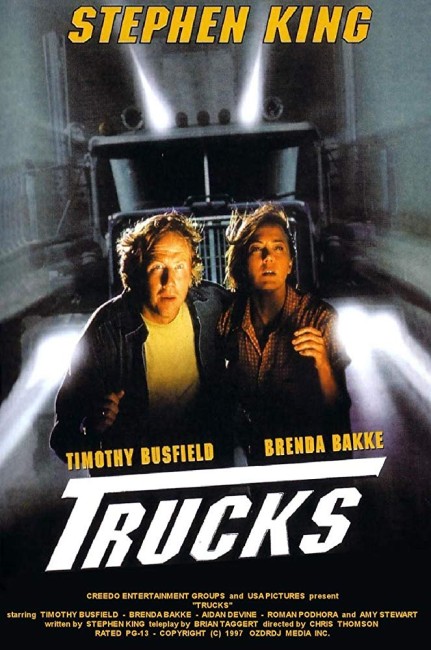 In the area around the Lunar truckstop, trucks suddenly start coming to life, driving themselves and pursuing people with lethal intent. A group of travellers and locals are imprisoned inside the truckstop diner. There they plot various means of escape from the prowling trucks outside. It is theorised that the trucks could have been activated by debris from a passing comet or military experiments at the nearby Area 51.

Trucks is a cable tv movie adapted from Stephen King’s 1973 short story of the same name. Stephen King himself previously adapted Trucks to the screen in his one and only directorial outing Maximum Overdrive (1986). This was widely regarded as a flop so exactly why the story was remade here is a mystery. Although it at least makes artistic sense – remaking a classic is an act of hubris, the assumption you can improve on it, the need to stamp new authorial signature over material that audiences hold in high regard, whereas the idea of perfecting a work that flopped the first time around makes much greater sense. And that is exactly what Trucks does – it aims far more modestly than Maximum Overdrive did and succeeds admirably.

While in Maximum Overdrive, Stephen King pumped the original story out with malevolent soda machines, drawbridges, goblin trucks and had humanity fighting back with rocket launchers, Trucks is far more contained and faithful to the original story. The short story was set around the location of the diner and the film for the greater part keeps it there, creating a tight bottleneck situation and suspensefully compounding it.

Director Chris Thomson builds much effective foreboding out of trucks cruising the wide-open prairie landscapes, creeping up behind people or just eerily sitting idling in the middle of the road. There is one particularly gripping sequence with Timothy Busfield trying to get the two teenagers out from a pipe while an idling truck lies parked over the mouth of it. The characterisations are effectively drawn, although Brenda Bakke looks frustrated and out of place playing a country girl.

The only major addition to the story is a trendy dash of X Files/Area 51 government cover-up UFO conspiracy, which seems flimsy as an explanation – the piece works much better as in Stephen King’s story, and its clear model Alfred Hitchcock’s The Birds (1963), without the need for any explanation. The ending contains an effective twist surprise.