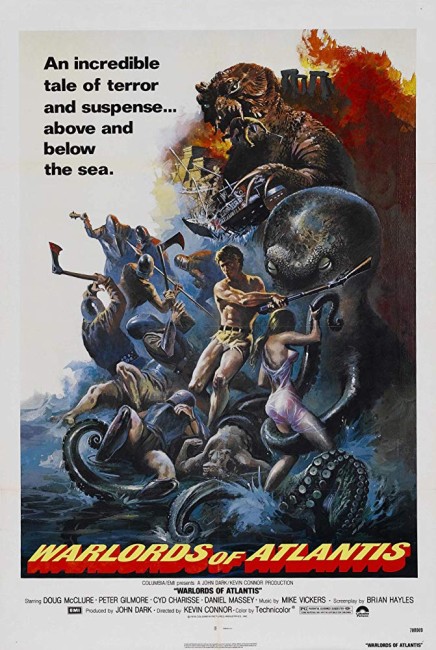 aka Seven Cities to Atlantis

In 1896, the aging Professor Aitken and his son Charles charter an expedition aboard the Texas Rose and descend into the depths in an experimental bathysphere designed by engineer Greg Collinson. Under the water, they are snatched by a giant octopus and dragged down to one of the five remaining of the seven sunken cities of Atlantis where they are made prisoner by the Atlanteans. While the others are thrown in with the slaves, including the crew of the Mary Celeste, the Atlanteans desire to recruit Charles’s genius. They show him their many marvels of super-science. He learns that the Atlanteans in fact come from Mars and are using their superior mental abilities to influence the outcome of human history and bring out mankind’s most warlike tendencies.

Warlords of Atlantis was the fourth and last of director Kevin Connor and producer John Dark’s series of period lost world films. Connor and Dark began with The Land That Time Forgot (1974) and carried on through At the Earth’s Core (1976) and The People That Time Forgot (1977). Warlords of Atlantis was the only of these films not based on the works of Edgar Rice Burroughs, although it follows the formula set by the other films in the series – a journey by stalwart period English scientists into a lost world filled with monsters, a voyage that takes places in a marvellous vehicle of period technology. The quartet of films all also feature stolid acting from lantern-jawed leading man Doug McClure and unconvincing model monsters on wires.

The Edgar Rice Burroughs adaptations were of uneven quality but with Warlords of Atlantis, John Dark and Kevin Connor hit a pinnacle that managed to transcend the tawdriness of the formula. This is largely thanks to Brian Hayles’s script. Hayles seems to have operated on the principle of having something happening to the heroes at every moment. It is like a crazed science-fictional sideshow spectacle – giant mutated monsters, Atlantis (not just the usual one city, but seven cities), Martians, superminds manipulating the course of human history to bring out its most bloodthirsty aspects, a diving bell designed in wonderful period brass, guards with sinister featureless mirrored metal hoods, luscious slave girls, mutineering crews, even a throwaway cameo from the captain of the Mary Celeste (the crew’s disappearance explained as their having been abducted as the Atlanteans).

It is during the tour of the higher cities of Atlantis however that the film attains an inspired height. We are granted vistas of beautiful Grecian cities of Utopian perfection stretching out through the caverns, of the Atlanteans floating in mid-air meditating and, in one moment of inspiration, Peter Gilmore being given a glowing crystal helmet that shows him the future of the Martian manipulations of humanity, which is represented by footage of the World Wars.

It is only the weak special effects – the unconvincing monsters and the flat matte paintings that represent the caverns and cities – that stop Warlords of Atlantis from attaining greatness as a work of Jules Verne-ian period super science. (Although the opening sequence with the flaming red Martian comet heading toward Earth is excellent).

Perhaps, in the end, the plot lacks a certain dramatic satisfaction – the villainous crew are appropriately vanquished, but one would have expected Atlantis to blow up, at the very least to have sunk again in the traditions of these films. It is an ending that feels oddly unfinished – the Martian Atlanteans are still left in power and the hint of a romance between the hero and heroine is curtailed as she is left behind to return to slavery. Perhaps Dark, Hayles and Connor had a sequel in mind.

Kevin Connor’s other genre films, aside from the aforementioned lost world adventures, include the horror anthology From Beyond the Grave (1974); the Arabian Nights fantasy Arabian Adventure (1979); the cannibalism black comedy Motel Hell (1980); and the ghost story The House Where Evil Dwells (1982). These days Conor directs for tv. Among Connor’s genre tv fare is:- Goliath Awaits (1981), an interesting tv mini-series about a society that has survived in a sunken ship; The Return of Sherlock Holmes (1987), which brought the famous sleuth into the present-day; the Indian adventure The Mysteries of the Dark Jungle (1991); the stalker thriller Shadow of Obsession (1994); the Egyptian archaeology adventure The Seventh Scroll (1999); the Christmas fantasies Santa, Jr. (2002), A Boyfriend for Christmas (2004), Farewell Mr Kringle (2010) and Annie Claus is Coming to Town (2011); the Hallmark adaptation of Frankenstein (2004); and Chasing Leprechauns (2012).