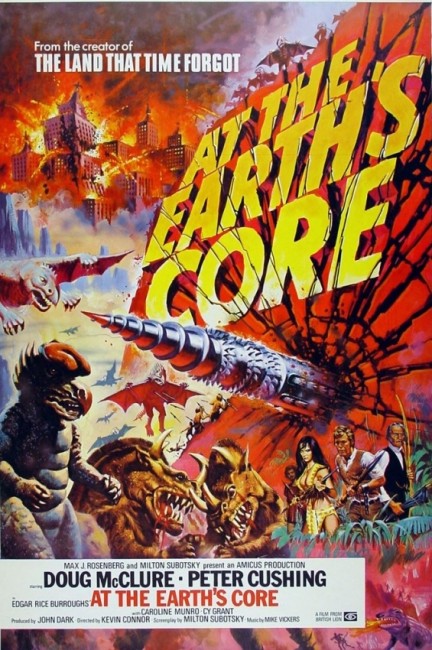 England around the turn of the 20th Century. Dr Abner Perry unveils his invention – The Iron Mole, a giant vehicle designed for exploring the centre of the Earth by drilling through the ground. He and engineer David Innes take the Mole on its maiden voyage but it goes out of control and they lose consciousness. When they come around, they find that the Mole has ended up in a strange prehistoric land at the Earth’s core, which they later learn is called Pellucidar. They are captured by The Mahars, intelligent, telepathic flying reptiles that keep primitive humans as their slaves via mind control. David falls for the beautiful slave girl Dia. When Dia is chosen as a sacrificial victim in the Mahar city, David must inspire the humans to rebellion in order to save her.

At the Earth’s Core was the second in a trilogy of Edgar Rice Burroughs adaptations made by director Kevin Connor, producer John Dark and starring Doug McClure. The series began with The Land That Time Forgot (1974), continued with The People That Time Forgot (1977) and ended on the non-Burroughs adapted but Burroughs-styled Warlords of Atlantis (1978). All these films were lost world films set period, usually in the Victorian era. At the Earth’s Core (1914) was Edgar Rice Burroughs’ fifth published adventure story, the first outside of his Tarzan series, and he wrote a further six books set in Pellucidar, including a crossover that took Tarzan there in Tarzan at the Earth’s Core (1929).

At the Earth’s Core has the finest opening of all the films in the series, a sublime evocation of what the Steampunk and cod Victorian science-fiction cycle is all about with the credits overlaid against moody red images of metal pouring from fiery forges and set to an epical score. The all-too-brief unveiling of the Iron Mole, a giant metal drillhead set on a wooden scaffolding pointed straight towards a mountain is great – it looks fabulous, the interior is perfect Victoriana and it feels as though everything in and on the machine might actually work. It is something that fully conveys the sweep of British Imperial technological wonder that these films are all about. (Indeed, At the Earth’s Core is the only film in this Victoriana science-fiction cycle to show the building of its Victorian Vessel of Wonder). The journey to the earth’s core is conducted with a sufficient degree of excitement and the entry into the titular land, full of steaming jungle, giant toadstools and garish lighting is a solid evocation of the cinematic Lost World.

However, after such a fine build-up, At the Earth’s Core goes completely downhill. It is ruined the minute the first monster bursts onto the scene, which rather laughably looks like a giant bird and has about the same conviction as the creature in the average Japanese monster movie or 1970s episode of Doctor Who (1963-89). None of the rest of the films in the Connor-Dark-McClure Lost World cycle takes such a colossal dive after their opening as At the Earth’s Core does. In fact, every time one of the film’s creatures enters – from the giant pig monsters to the Mahars themselves, which fly on visible wires and display none of the arcane intelligence they are spoken of having – the film plummets further down in its already tenuous credibility.

Moreover, At the Earth’s Core is not a film that engenders a great deal of conviction in the first place – Doug McClure and Peter Cushing immediately start communicating with the prehistorics in English without batting the slightest eyelid. Peter Cushing seems unable to take any of the film seriously and plays his part as a buffoonish parody of an absent-minded Englishman. He carries his umbrella everywhere – when confronted with a monster he waves his umbrella at it. He gets lines like (of the Sagoths) “They’re so excitable – like all foreigners,” and seconds before succumbing to Mahar mind control: “You can’t mesmerise me, I’m British.” In the opening moments, Doug McClure tries to match Cushing by playing with a puffed-up comic braggadocio but when the action starts he quickly (and thankfully) reverts to the square-jawed stolidity he maintained throughout the other films in the series.

While a reasonable effort has been put into some of the sets – particularly the Mahar grotto and the caverns in their city – Pellucidar lacks conviction as a whole. The jungle seems cramped and too obviously to be located on a soundstage, while the exteriors of the city are clearly matte work. It is a far cry from the Pellucidar that appeared in Edgar Rice Burroughs’ books, a land inhabiting the hollow interior of the Earth, which was described as having its own sun.

Much more so than the other Connor-Dark-McClure Edgar Rice Burroughs adaptations, this one seems beset by a crude sexism – Doug McClure’s decision to fight the Mahars seems to be based more on a red-blooded male reaction than a just battle against inhumane oppression, his horror derives from seeing the monsters doing what appear to be unspeakable things to women (the camera conveniently shies away from showing what happens after the Mahars dive down on the hypnotised women). And when McClure is having problems with slave girl Caroline Munro, he takes Peter Cushing’s advice to “Be masterful” and silences her objections by kissing her.