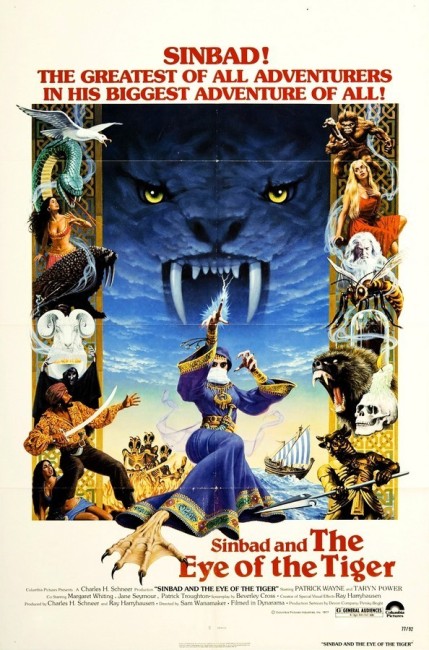 Sinbad is implored by his beloved, the Princess Farah, to help her brother Kassim, who has been transformed into a baboon by the black arts just as he was about to be crowned Caliph. Behind this is Farah’s stepmother, the witch Zenobia, who desires the crown for her son. Sinbad and Farah seek the help of the wise man Melanthius. Under Melanthius’s guidance, they set sail for the lost land of Hyperborea, a fertile valley amid the icy wastes at the North Pole, in the hope of uncovering the matter transformation secrets of a vanished people. All the while, Zenobia pursues, determined to stop them.

In a Ray Harryhausen film, the screen dramatics are wooden but this is unimportant as the film is usually carried by the spectacular stop-motion animated set-pieces. In Sinbad and the Eye of the Tiger, there is not even that – it feels like a film composed of leftover ideas that were not good enough for the other Sinbad films. The film even rehashes set-pieces from other Harryhausen films – the skeleton duels from The 7th Voyage of Sinbad, the giant insects from Mysterious Island (1961).

Crucially, what it lacks is any big spectacular stop motion set-piece. The ones we do have are lacklustre. The sabre-tooth tiger, which presumably provides the eye of the title that is cryptically unconnected to anything else in the film (or even mentioned anywhere throughout), looks like a stuffed hamster, and only the Trog and baboon have any character. There is never a standout scene that dazzles with the pure wondrousness of Harryhausen’s art like the encounter with the Cyclops in The 7th Voyage of Sinbad, the skeleton fight in Jason and the Argonauts (1963) or the Kali duel in The Golden Voyage of Sinbad.

Moreover, the story is often contrived, having to sidetrack out of its way to throw in the various encounters with Harryhausen’s creatures – the visit to a tent where they are attacked by skeletons, the walrus encounter at the North Pole, the giant wasp, the reanimated sabre-tooth. If the plot kept to strictly linear telling of the story and eliminated all side-episodes, Sinbad and the Eye of the Tiger would lose much in the way of fantasy content.

Actor Sam Wanamaker, who appeared in many film roles but was probably best known for leading the restoration of Shakespeare’s Globe Theatre, took the director’s chair and was reportedly not happy making the film, having little interest in the fantasy content and finding the laborious and painstaking necessity of Harryhausen’s special effects frustrating. It certainly shows on screen. John Wayne’s son Patrick makes a wooden Sinbad, while Margaret Leighton camps it up badly as Zenobia. Patrick Troughton, the second incarnation of Doctor Who (1963-89, 2005- ), playing a tetchy guru is the only fun the film offers. Jane Seymour offers a touch of class as the love interest, although remains underused.