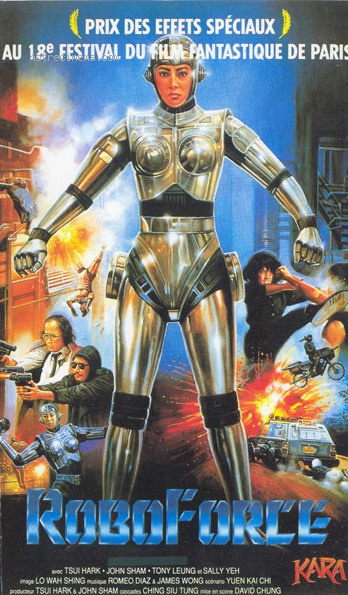 aka I Love Maria

A gang of criminals nicknamed the Robogang have been using a giant robot, The Dominator 1, to conduct daring robberies across the city. One police scientist, Loony, is dismissed by his chief after he attempts to come up with a design for a robot to combat the Robogang. In a bar, Loony comes to the aid of the alcoholic Whisky, a former member of the Robogang, and they become friends. When the Robogang see Loony and Whisky together, they think that Whisky has sold them out. The gang leader Lucifer sends an android made in the likeness of his second-in-command Maria to kill Whisky. Instead, Loony and Whisky manage to stop the android. Loony succeeds in reprogramming the android Maria and uses her to fight back against the Robogang as they come hunting them.

Roboforce/I Love Maria is a Hong Kong variant on RoboCop (1987) – it even came out less than a year after RoboCop had. At the time, Roboforce/I Love Maria achieved a minor curiosity value for featuring a rare acting role from cult Hong Kong director/producer Tsui Hark, the man who fairly much invented Hong Kong’s Wu Xia style of filmmaking with Zu: Warriors from the Magic Mountain (1983) and directed other hits like Once Upon a Time in China (1991), Green Snake (1993), as well as produced the A Chinese Ghost Story and Swordsman series and several of John Woo’s early films.

While it met with modest success, Roboforce is a rather silly film. Director David Chung taps squarely into the giddily silly and often shrilly hysteric slapstick vein that runs through much of Hong Kong light entertainment. There is a promisingly adept opening with the giant robot bursting out of a bank and past a cordon of armed police amid much mass destruction, which is contrasted with the comic relief of Tony Chiu-Wei Leung’s reporter who keeps dropping his camera every time he gets a perfect shot.

Alas, this slapstick element almost entirely comes to dominate the film. It is all inane slapstick down around the level of custard pie fights – John Sham getting on a scooter and pedalling with his feet; scenes with police accidentally getting the handcuffs on the wrong people; Tsui Hark thinking the robot version of Sally Yeh is her trying to reconcile with him as she demolishes most his apartment in an attempt to kill him.

The height of inanity is the scenes where John Sham reprograms the Maria robot with the codeword “I love Loony” and he and Tsui Hark keep superseding each other’s commands and getting the robot to turn and attack the other, and various scenes with them being electrocuted, dragged behind a car and eventually dumped into a portable toilet. None of this is helped by the characters who are idiotic one-dimensional caricatures, the cartoonish sound effects and the terribly flat English-language dubbing.

On the plus side, the action sequences are directed by Tsui Hark’s frequent collaborator Ching Siu-Tung, who made the fabulous A Chinese Ghost Story (1987) and sequels and has directed action sequences on just about every fantastic Hong Kong film ever made. It is Ching Siu-Tung who makes Roboforce worth watching, turning it almost into something akin to a live-action version of Inspector Gadget (1983-5). There are a number of entertaining sequences with the female robot popping missiles out of its arm and firing her detachable hands after people. The attack on the church has a wonderfully entertaining, pure Ching-esque sequence with Tsui Hark Tarzan-swinging through a forest on a vine, pursued by a gang of thugs who are also swinging on vines after him at the same time as firing machine guns. The battle between Maria and the massive Dominator robot is entertaining (although it seems to demolish so many walls that one wonders how the building they are fighting in continues to remain standing).

There is a lively climax with the robot Maria flying in and saving a falling man by catching him on her back, then snatching missiles in her bare hands and turning them around to fire back at oncoming missiles, the villains beating her with metal pipes, she firing her detachable fists and feet around the warehouse, and various others using cannons to propel themselves across the other side of the room. This is enjoyable in a cartoonish way but ultimately it is the silly slapstick element that fatally weakens Roboforce.