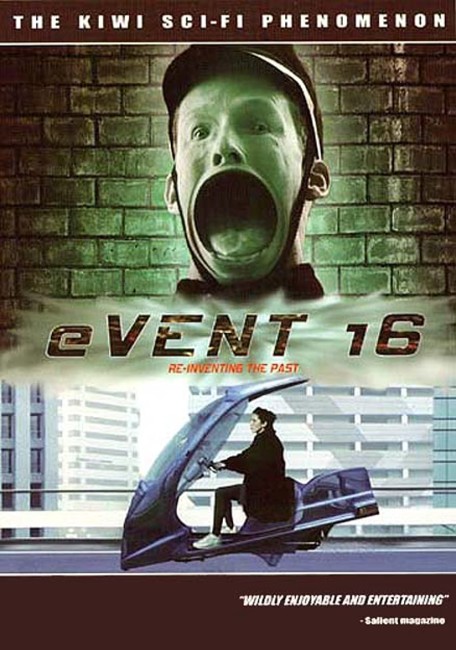 Wellington, New Zealand, 2006. The scientist Matt has created a portal that opens up time. This is carefully monitored in secret by two time police officers from the future who have come to ensure the integrity of the timeline. The portal opens up a hole through a wall in Wellington of 1893. James Carrick, a wanted murderer on the run, inadvertently steps through the hole and into Matt’s laboratory where he is found by Matt’s girlfriend Paige, a nurse. Paige tends Carrick’s bullet wound but he develops an unhealthy fixation with her. The temporal police attempt to stop Carrick. At the same time, he is aided by Frank, a temporal outlaw, who wants Carrick to commit his crimes, which include killing Paige.

Event 16 was a low-budget digitally-shot film from ingénue New Zealand director Derek Pearson. Pearson financed most of Event 16 himself and shot it over a period of five years on a budget of around NZ $60,000. Pearson was one of the new groundswell of backyard science-fiction filmmakers around the same time – a growing number of people that can include the likes of the Spierig brothers who made Undead (2003), Kerry Conran of Sky Captain and the World of Tomorrow (2004) and Samuli Torsonnen and Timo Vuorensola of Star Wreck: In the Pirkinning (2005) – who embraced the digital revolution and instead of using yesterday’s 16mm cameras eagerly harnessed home computers to turn out their own science-fiction films with digital effects polish that sometimes rival the work of top-drawer studios like Industrial Light and Magic.

In the aftermath of Event 16‘s premiere at the 2006 Wellington International Film Festival, some were over-eager to compare Derek Pearson’s efforts to fellow Wellingtonian Peter Jackson’s no-budget debut feature Bad Taste (1988). Alas, Event 16 lacks the sheer No. 8 fencing wire ingenuity that came in Jackson’s debut. Certainly, Event 16 is put together with a fair editorial polish and all the performances are up to a professional standard.

There is no denying that Pearson has done a highly professional job with the digital effects that create a Wellington of 1893 and of 2026, along with various bodily morphings. On the minus side, the digital effects are nothing outstanding – certainly, nothing that wows on the level that the home-made effects of Star Wreck: In the Pirkinning did. The measure of difference might be that Bad Taste propelled Peter Jackson to a frontline Hollywood name a decade on, while nothing has been heard from Derek Pearson since.

The biggest disappointment about Event 16 is simply that there is nothing exceptional about it as a science-fiction film. Pearson has opted to tell a time travel story using the notion of temporal police fighting to protect the integrity of the timeline. This is an idea that has been done imaginatively in science-fiction literature and occasionally on film – Timecop (1994) or tv’s hyper-enigmatic Sapphire & Steel (1979-82). (For a more detailed overview see Time Travel Films).

Alas, having introduced such themes, Pearson does almost nothing with them in any interesting way. Contrast Event 16 with some of the other fine examples of the time paradox story – the likes of Twelve Monkeys (1995) and in subsequent years with the likes of Timecrimes (2007), The Infinite Man (2014), Predestination (2014), Black Hollow Cage (2017), In the Shadow of the Moon (2019) and Beyond the Infinite: Two Minutes (2020) or for that matter the rather enjoyable subsequent New Zealand-made comedy treatment Mega Time Squad (2018). There is nothing similar here – no conceptual joy in watching pieces of an ingenious temporal jigsaw puzzle falling into place; not even any surprise twists and turns, excepting some improbably contrived identity bending revelations at the end. In fact, strip away the digital effects and Event 16 would be nothing more than a cops-and-robbers story with various people chasing each other around.