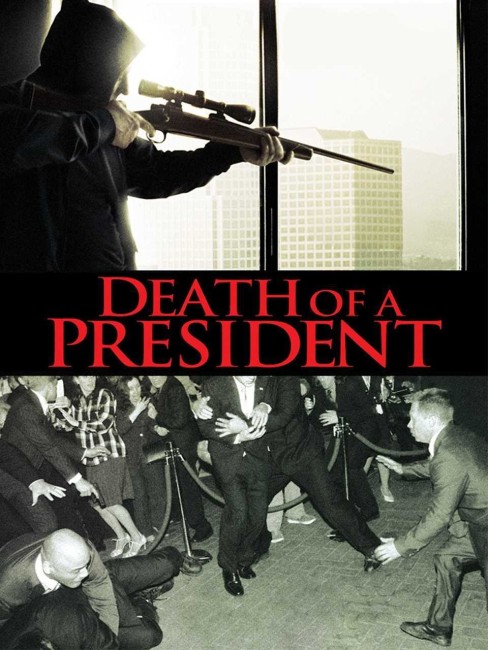 It is October 19th, 2007, as US President George W. Bush arrives in Chicago to deliver a speech. The way to the Chicago Sheraton where he is speaking is lined with protesters who manage to break out onto the road in front of the car at one point. Bush delivers his speech successfully. However, while on a walkabout amid the crowds outside the hotel, he is shot by an assassin. He is rushed to hospital but dies in surgery. Police and FBI search for the killer and detain a number of possible suspects who were in the vicinity at the time. The likeliest suspect is thought to be Syrian immigrant Jamal Abu Zikri who was seen exiting the building and was believed to have previously attended an al-Qaeda training camp in Afghanistan. Abu Zikri is tried and convicted. However, as the documentary uncovers, the evidence against Abu Zikri was shaky and another possibility emerges as to who the killer was.

The success of Michael Moore’s Fahrenheit 9/11 (2004) brought an unprecedented flood of documentaries centred around US President George W. Bush and his policies, in particular the muchly hated Iraq War. The majority of these came from the outraged liberal side of the fence – there have been a number of rejoinders from the conservative camp, although these are not nearly as prolific. It is unprecedented the amount of documentary space that has been devoted to George W. Bush – one is unable to think of any other US President who has had so many documentaries devoted to them (and these are theatrically released documentaries, not History Channel specials), let alone a President who was still sitting in office at the time they came out. It seems that the documentary has now become the new ideological war zone, particularly for a left that feels it has been disenfranchised by the mainstream print (and almost certainly televised) media.

Amid the host of these documentaries taking umbrage with Bush and the Iraq War, Death of a President caused a considerable degree of controversy in taking the mockumentary approach and centring itself around a fictional depiction of George W. Bush’s assassination. Expectedly, there was a substantial ripple of protest from the American conservative establishment, including fierce denunciation from the Republican Party and commentators like Rush Limbaugh. Moreover, the film did not receive widespread release in the US – only 143 theatres in the whole of the US – with some distributors declining to screen it and tv channels refusing to carry ads.

Death of a President uses the guise of shock outrage to gain people’s attention. Underneath its sensationalism however, the film has some strong and potent things to say about the state of contemporary America in the 00s. Almost certainly, the politics of the people making Death of a President (though they are largely British, not American) are not too different from Michael Moore and his imitators. The end position that both Death of a President and Fahrenheit 9/11 come to – a damning attack on the arrogance, ignorance and outright contemptuousness of the Bush administration – is an almost identical one, albeit arrived at via different roads. Death of a President taps into and conducts a remarkable x-ray of the disillusionment of the American populace during George W. Bush’s term in office – the fear over the increasing erosion of civil liberties, the international loathing caused by the US’s belligerent stance on a good many matters and the ill treatment of huge sectors of the populace (protesters, those of Arabic ethnicity). One does not know to what extent the scenes of the protesters outside the Chicago Sheraton was real or staged by the film but they seem to show ordinary people with a genuine sense of anger.

Death of a President is probably the ultimate extension of what Robert Zemeckis did in Contact (1997) where the visual effects department digitised newsreel image of Bill Clinton and manipulated it so that Clinton could be inserted into the fictional narrative as though he were an actual actor. Death of a President takes this to the extent of digitally altering existing footage of people like George W. Bush and Vice President Dick Cheney and turning them into the characters in a fictional drama – Dick Cheney even gets to deliver a funeral oration for George W. Bush at one point.

In the roles of the interviewees, the filmmakers have chosen a cast of unknown actors to further the illusion – the only face that one ended up recognizing was Michael Reilly Burke, best known for his memorable essayal of the title role in Ted Bundy (2002). There are some very good performances that go into these parts. They are roles where both the filmmakers and the actors have clearly done a good deal of research into issues like FBI procedure, Presidential speechwriting and the reality of forensics so that the characters can litter their interviews with a flavour of authenticity.

The film also makes a point of giving rounded and non-cliched characters to all the interviewees. This is particularly the case when it comes to the portraits of Muslims – the film pointedly opens with the narration from a Muslim woman (Hend Ayoub) talking about how she wept at 9/11 and prayed that the assassination was not conducted by one of her people. At the end, the film moves in powerful ways to comment on the deep betrayal felt by soldiers in Iraq who believed they were going off to fight for a just cause – “There is no honour in dying for an immoral cause,” M. Neko Parham potently states at one point.

The story is deliberately told using a thriller structure. The film arrays a host of suspects and then slowly demolishes each one by one. (Although, one did feel that it stretched credibility ever so slightly that so many people with suspicious motives all managed to come within the vicinity of George W. Bush who is probably the most heavily guarded individual in the entire world – when Bush visited London in 2003, for instance, half the entire city was cordoned off for security reasons).

The end revelation of the true killer’s identity comes with a considerable surprise – and the surprise is one of haunting effectiveness that puts the human cost of the arrogance of the Bush White House into tragic perspective. Equally effectively, the story given over to the trial and conviction of Jamal Abu Zikri becomes a haunting echo of the way that the Bush government manipulated the public’s ignorance over matters Arabic and played into the fear of terrorism to convince the American public that Saddam Hussein was the one behind 9/11.

Death of a President was made by British filmmaker Gabriel Range who has elsewhere made a series of documentaries or biopics. His only other effort to approach genre material was the earlier The Day Britain Stopped (2003), a similar mockumentary about the sudden catastrophic halting of the public transit system.