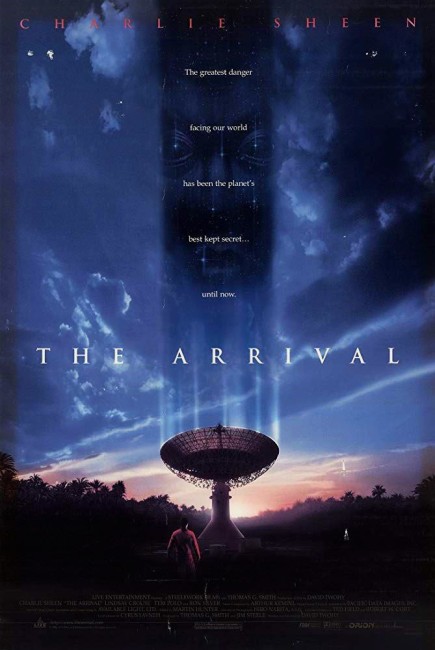 Radio astronomer Zane Zaminski suddenly picks up a 45 second non-random radio signal from outer space. However, his superiors reject the authenticity of the signal, saying it is too brief to be meaningful. Zane is then dismissed, ostensibly on the grounds of cutbacks. Zane then finds that he has been blacklisted in the profession and that all information relating to the broadcast has been confiscated. Getting a job as a cable tv technician, he sets up an array of satellite dishes to act as a receiver and makes the startling discovery that someone on Earth is broadcasting back to the source of the signal. He traces the source of the earthbound broadcasts to Mexico. Heading there, he teams up with atmospheric scientist Illana Green and they make the discovery that aliens disguised as humans have been buying up power stations all over the world and turning them into terraforming plants to convert the Earth’s atmosphere in readiness for a takeover.

David (sometimes also known as D.T.) Twohy built a reputation in the action field as a screenwriter on films such as The Fugitive (1993), Terminal Velocity (1994) and G.I. Jane (1997). Twohy has racked up even more impressive credits within the genre. One may perhaps forgive him for Critters 2 (1988) and Waterworld (1995) in light of the witty and intelligent Warlock (1989) and the modest Impostor (2002).

Even better was when David Twohy emerged as a director. His debut came with Timescape/Disaster in Time (1992), one of the more intelligent of the crop of 1990s time-travel movies. With his subsequent directing/writing outing The Arrival and especially his next film Pitch Black (2000), followed by the subsequent likes of the haunted submarine drama Below (2002), The Chronicles of Riddick (2004), the psycho-thriller A Perfect Getaway (2009) and Riddick (2013), Twohy established himself as one of the most promising and intelligent of the current cream of genre directors.

The Arrival taps into the theme of alien infiltration and the atmosphere of paranoia and conspiracy that was popularised around the time by tv’s The X Files (1993-2002, 2016-8). It is almost certainly a desire to exploit the success of The X Files that led to The Arrival being greenlighted. The problem that The Arrival faced when it came out was that after three seasons of The X Files, the alien takeovers, the sinister heavies come to eliminate people/evidence and the perpetual atmosphere of paranoia and distrust had started to become an overly familiar cliche.

That aside, The Arrival is better less when it is delving into paranoia and conspiracy than for the genuinely weird surprises that David Twohy keeps pulling out of the hat. There is a remarkable opening shot that pulls back from a sunny day in a field of poppies to reveal the field sitting in the midst of a snowy North Pole ice-cap and then keeps on pulling back right out into orbit around the Earth.

Twohy packs the film with these wild disorienting spins – the moment the Mexican man that Charlie Sheen is pursuing bends his legs forward and leaps up onto a roof; the shot where the taxi driver passes through the scanner, which momentarily lights up showing his face to be other than human; the bomb left in Sheen’s house, which creates a vortex that sucks everything in the house into it; the scene where Sheen finds a double of Ron Silver as one of the security guards at the power station; the edgy scene where Lindsay Crouse propositions Sheen, while on the other side of the door deadly scorpions gather; the almost surrealistic scene where Sheen makes a phone call in the bath before another bath suddenly explodes through from the floor above.

The film is marred by the need to have a big, upbeat climax – Charlie Sheen’s broadcasting the videotape is seen as triumphant but in light of the vague allusions it contains, it seems unlikely that it would be received by the rest of the world as anything other than conspiratorial nuttiness.

David Twohy has certainly done his homework about radio astronomy, for one, and The Arrival emerges as a smart, suspenseful and fascinatingly weird view of alien invasion. Everything in fact that Independence Day (1996) that came out the same year was not. Independence Day of course had colossal-size special effects as the sole thing going for it, while The Arrival‘s effects are only modest and by no means show stopping. As a result, The Arrival did only modest business, while Independence Day went on to become the No. 1 Box-Office success of the year.

The Second Arrival/The Arrival II (1998) was a bland sequel. The film should not be confused with the B-budget alien vampire film The Arrival (1991) or Denis Villeneuve’s alien visitors film Arrival (2016).

(Winner in this site’s Top 10 Films of 1996 list. Nominee for Best Director (David Twohy) and Best Original Screenplay at this site’s Best of 1996 Awards).