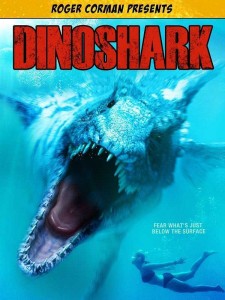 Melting ice in the Arctic causes the revival of a prehistoric shark. Four years later, Trace McGraw returns to Puerto Vallarta, Mexico where he grew up, having failed in his various ventures as a tour boat captain around the world. He takes over the boat of a friend and prepares to live in it. He meets biology student/water polo coach Carol Brubaker and they are drawn in to investigate as a friend is killed by the dinoshark. As the local harbour patrol captain Victor, an old friend of Trace’s, accuses him of the deaths and being a drug smuggler, they try to alert people to the menace of the dinoshark as it devours more victims.

Dinoshark is produced by the legendary Roger Corman who was producing Jaws ripoffs back in the day of the original killer shark fad – see the likes of Piranha (1978) and Up from the Depths (1979). Corman was one of the first to come up with the gonzo title creature mashup with Dinocroc (2004) and Supergator (2007) and then the inevitable Dinocroc vs Supergator (2010), as well as the subsequent Piranhaconda (2012) and Cobragator (2018). He entered the gonzo killer shark fad with Dinoshark, followed by Sharktopus (2010), which has produced two sequels. Corman has made small cameos and acting appearances in a number of films – he’s even in The Silence of the Lambs (1991) – but makes one of his most substantial appearances here as a shark scientist.

Dinoshark was made fairly soon into the gonzo shark cycle. It predates Sharknado and the point that the genre went nutzoid. The disappointment is that is no more than an ordinary killer shark film with the addition of a gonzo mash-up title. A prehistoric shark is thawed out from the ice in the Arctic – shades of The Beast from 20,000 Fathoms (1953). (The idea of the prehistoric megalodon shark turns up with a great deal of regularity in these gonzo killer shark films). The rest of the time the megalodon is just a regular shark on the attack.

All of the film’s moves are by the book. The race to save the resort as the shark heads down the river; the hero who tries to warn of the menace but the authorities disregard and even want to arrest; the various victims that befall the menace and their mini-dramas. There is an entertainingly absurd scene where the shark brings down a helicopter, other scenes where it gobbles a parasailer, a yacht and a jetbiker. On the other hand, there are none of the deliberately ridiculous scenes that marked many of the other entries in the gonzo killer shark genre.

Among the unknown (and mostly local actors – the film was filmed in the real Puerto Vallarta), the only recognisable name (aside from Corman) is Eric Balfour, an actor that one has always maintained should have had a bigger profile than he does. Balfour has a seemingly effortless ability to play a likeable regular guy and on screen comes across as someone who radiates the feeling he could be anybody’s best friend.

Kevin O’Neill has been a visual effects supervisor usually with Flat Earth Productions. He has directed several other films for Roger Corman’s New Horizons with Dinocroc (2004), Attack of the 50 Foot Cheerleader (2012), Dracano (2013), Sharktopus vs Pteracuda (2014) and Sharktopus vs Whalewolf (2015).