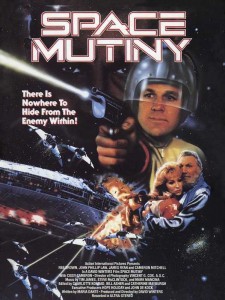 The spaceship Southern Star has been sent on to colonise another world, a journey that will last thirteen generations. However, Flight Commander Elijah Kagan is plotting a mutiny against the ship’s commander Alex Jansen, wanting to redirect the course of the ship to join the space pirates. Kagan sabotages the landing of a Viper ship, killing a professor on board. The Viper’s pilot Dave Ryder joins Jansen’s daughter Lea to investigate, during the course of which they become attracted. They discover that Kagan has conscripted most of the ship’s security The Enforcers to his side and is threatening a violent takeover.

Space Mutiny was a 1980s space opera, one of several films in a similar vein produced in this era. It has since become regarded as a bad movie classic for its cheap production values and laughable corner-cutting. It has been lampooned on Mystery Science Theater 3000 (1988-99, 2017-9) several times.

Most of the film is set aboard a spaceship and involves a lot of running around and shooting people up. The plot concerns John Phillip Law (who has a great evil laugh) and his plans to overthrow the ship – something he seems to take an awful long time getting around to doing. Hero Reb Brown and the bad guys do a lot of shooting in and around a factory and engage in races in ridiculous looking dodgem cars that travel about five miles-per-hour and go up in big explosions whenever they collide.

There are the plentiful absurdities and corner-cutting gaffes to the film. Rather than actually build sets, much of the show has been shot in office buildings and an industrial plant. Most notably, all the offices come with windows in the background that have sunlit light sources coming through despite the ship supposedly being in space. The technology is all old 80s 286 computers and plasma balls, which really dates the film. The factory comes with brick walls and cement floors, which seem absurd things to construct on a spaceship.

There are space disco sequences and all the women wear skimpy spandex outfits that display liberal amounts of cleavage and thigh. All the exteriors of the spaceship and visual effects are stock footage that has been cobbled from tv’s Battlestar Galactica (1978-9) where the Southern Star is the Galactica, the Cylon  basestars are the pirates ships and the smaller transport ships are the Viper ships.

The cast struggle valiantly with the material. They are not helped by absurd lines like “Is a woman allowed to buy a man a drink in your galaxy?” Reb Brown was never much of an actor and is stiff in the dialogue scenes. Nevertheless he gets to take his shirt off and look suitably buffed when he gets into action. (Incidentally, Cisse Cameron who plays the love interest is Brown’s wife in real life). The worst out of the deal is an aging and overweight Cameron Mitchell who delivers his best behind a very fake looking beard.

Director David Winters had a none-too-successful career as an actor during the 1950s and early 60s before turning to producing. As director, he made a number of films, including genre entries such as the musical tv version of Dr Jekyll and Mr Hyde (1973) with Kirk Douglas, the Alice Cooper film Welcome to My Nightmare (1975) and the Caroline Munro slasher film The Last Horror Film (1982), as well as several low-budget action films. Winters left soon into shooting and was replaced by South African director Neal Sundstrom who went on to make several other genre films as director with Howling V: The Rebirth (1989) and Slash (2002).