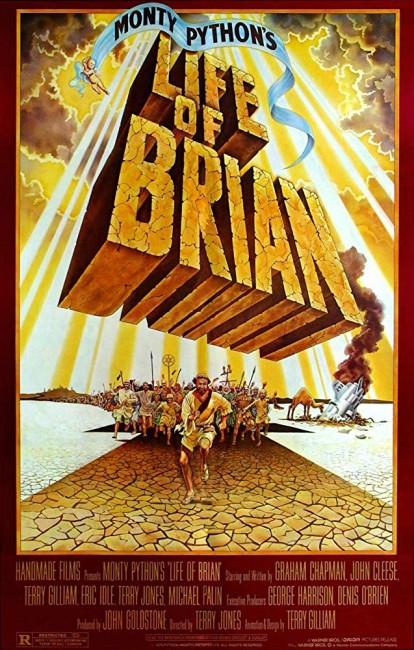 Brian is born in Jerusalem at the same time as Jesus Christ. Growing up, Brian becomes involved in an anti-Roman revolutionary group. In order to evade capture by the Romans, Brian starts preaching, only to obtain a crowd of followers who think that he is the Messiah.

The Life of Brian was the third film from the Monty Python team. The Pythons – Eric Idle, John Cleese, Terry Gilliam, Graham Chapman, Michael Palin and Terry Jones – originally came together, writing and appearing in the cult tv series Monty Python’s Flying Circus (1969-74). Their first cinematic outing was the little seen And Now For Something Completely Different (1972), a filmed version of the more popular sketches from the tv series. The Python’s first original work was their witty skewering of the Arthurian legends Monty Python and the Holy Grail (1975). Then came The Life of Brian, which was followed by the live concert film Monty Python Live at the Hollywood Bowl (1982) and Monty Python’s The Meaning of Life (1983), which returned to the skit format but with all original material. After that point, the team went their own separate creative ways – although several of the troupe did reunite several years later to provide voice work for the animated biopic A Liar’s Autobiography: The Untrue Story of Monty Python’s Graham Chapman (2012).

However, The Life of Brian was the Monty Python team’s finest hour. It was the biggest budget they ever had and the nearest any of their films comes to attaching a plot to the skits. It was also the point that they were at their most side-splittingly funny. Even over-familiarity with the gags through their sycophantic repetition at too many university parties has failed to take the edge off the film.

There are so many side-splitting sequences – the revolutionaries whose graffiti is interrupted by a centurion who gives them grammar lessons for their failure to properly conjugate Latin; the sketch with Michael Palin as a lisping Pontius Pilate; the women sneaking into the stoning disguised as men; the opening “Blessed are the Cheesemakers” sketch parodying the Sermon on the Mount. The funniest sequence that always come to memory is Brian’s telling his followers – “you are all individuals” to be followed by the chant “yes, we are all individuals” and one lone voice standing out from the crowd “I’m not.”

Monty Python’s The Life of Brian is often schoolboyish in its humour – the films, if nothing else, allowed the Pythons to indulge in more scatological humour that they were prevented from on tv. However, The Life of Brian is one of the funniest and most sophisticated comedies ever made. Even the end crucifixion scene with a row of thieves singing Always Look on the Bright Side has become an anthem of sorts for keeping one’s chin up in hard times.

The Pythons jab their knives into everything from 1950s Cecil B. De Mille Biblical spectacles, the stuffiness of the English upper-class to left-wing revolutionary groups. (There are times you are almost certain the film had to have drawn some inspiration from Goscinny and Uderzo’s Asterix comics). However, the Pythons’ biggest target is Christianity. This of course gained The Life of Brian its most outspoken critics and the film was greeted with sizable picket lines and calls for its banning when it opened in the US. Even EMI, the original backers of the film and Monty Python and the Holy Grail withdrew due the controversy of theme, until Handmade Films, the production company formed by Beatle George Harrison, stepped in. Monty Python’s The Life of Brian is certainly a wickedly irreverent film, although many of the churchgoing critics fail to see the subtle distinction that the film is not so much spoofing the life of Jesus Christ as it is making a fun out of dogmatic believers.

The genre inclusion comes with an amusing sequence parodying Erich von Daniken and the subsequent Ezekiel and the flying saucers fad as Brian falls off a tower while being pursued by a Roman garrison, is caught by a flying saucer, which whisks him through space in a Star Wars (1977) dogfight, before the ship is hit and crashes back to the base of the tower just as the garrison reaches the bottom. It is a rather silly but not unamusing sequence.

In its original theatrical release, The Life of Brian came accompanied with a witty trailer. At the time, most theatrical films in England came accompanied by short films and documentaries before the main feature started. For the first few minutes, the trailer starts out like a standard documentary travelogue about Venice before John Cleese’s voice starts laying into it “… more fucking gondolas.” The trailer is alas cut from most video and dvd versions.