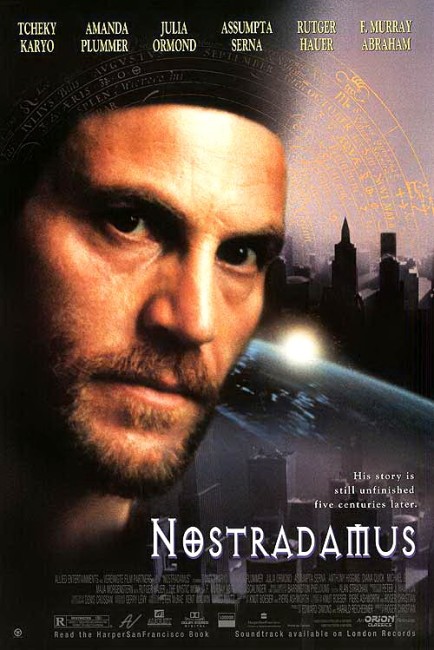 As a medical student in 16th Century France, Michel de Nostradamus is treated with ridicule for questioning conventional practices of the day. As plague hits the university, he institutes radical procedures such as burning the bodies, refusing to bleed patients and an insistence on hygiene. This brings him to the attention of The Inquisition but he is spared when he saves the life of the Chief Inquisitor. He is taken on by the progressive Dr Julius Scalinger, who shows Nostradamus his hidden library that contains forbidden texts on science and the occult and swears him never to reveal its existence. Nostradamus then becomes absorbed in the visions of the future he begins to have, writing these down in cryptic verse to avoid prosecution by The Inquisition. When he predicts the death of King Henry II, this bring him to the attention of Queen Catherine de Medici.

As the 19th Century came to an end people felt a great malaise and saw the coming century as bringing a closure to the way things were and a newness that would sweep away the social diseases and outmoded thinking of the 19th Century – a state of mind that was known as the fin du siecle. A not dissimilar malaise appeared at the end of the 20th Century. Contemporary art was stated as having reached “the end of all novelty” and seen as trapped in a creative dead-end of imitations and replications. In mainstream cinema, from Natural Born Killers (1994) through the cinema of Abel Ferrara ran the view that we had reached a profound purposelessness and emptiness that is devoid of any sense of morality. Works like Se7en (1995), tv’s Millennium (1996-9) and 8MM (1999) co-opted the serial killer thriller as metaphor for an overwhelming sense of moral evil drowning out the world. From The X Files (1993-2002, 2016-8) to JFK (1991) there was the belief that society has been taken over by something corrupt and a yearning for clarity and renewal.

The great 19th Century fin de siecle also held the vision of the 20th Century as bringing vast transforming technological change. Within only the last few years of the 19th Century and the first few of the 20th Century came the discovery of flight, X-rays, the first commercial use of electricity, the mass production of the car, indeed the discovery of cinema itself. Which is not dissimilar to the way that the 21st Century was seen as embodying vast transformations of technology – the much vaunted Information Superhighway and the growth of e-commerce.

Nostradamus was the first film to directly tap into and make its fin de siecle wish fulfillment overt. If Nostradamus’s prophecies are to be believed (which I do not) then August 1999 should have held the coming of a great dictator and worldwide nuclear war. These and other of Nostradamus’s prophecies that purportedly predicted major events of the 20th Century featured heavily in the film’s advertising. Although the film itself never mentions the 1999 prophecy, it was quick to emphasise that once past “the deeply troubled 20th Century,” we are in for a “New Age” of peace and quiet. The film fades out on the vision of a spaceship heading for the stars – surely an image that treats the 20th Century fin de siecle promise of technological transformation with an extraordinary optimism.

The film is an odd and unsatisfying piece however. The audience goes in with the advertised expectation they would be seeing a film about Nostradamus’s prophecies. In fact, specific prophecies feature very little in the film. Instead, the film seems to want to make an historical portrait of Nostradamus. Although this is an historical portrait 90s style – a la the likes of 1492: Conquest of Paradise (1992), Immortal Beloved (1994), Queen Margot (1994) and Braveheart (1995) – where the emphasis is on the dirt, the sex lives of historical figures and the central character’s struggle for right. Indeed, far more time is spent on Nostradamus’s love life than his prophetic powers. Mostly the film sets out to make a portrait of Nostradamus as a progressive thinker – his championing of hygiene, medical research and the Copernican worldview, his stance against the favoured bleeding treatments of the time. Not that such is untrue. These are all verified aspects of Nostradamus’s life (in so far as it is possible to dissociate the historic Nostradamus from apocryphal myth-making).

Yet considering some of the more colourful stories about Nostradamus the film could have told – the story about how he recognised a lowly monk as a future pope; the story of the dinner he went to where the host challenged him to predict whether they would eat a black or a white pig and then ordered the opposite pig to killed – only to be told that the pig had escaped and that the servants had to kill the pig that Nostradamus had predicted; the visions he apparently conjured forth for Catherine de Medici – the film’s downplaying of the more fantastic aspects of its character is puzzling. Certainly, in terms of drama, it makes for the least interesting of all possible Nostradamus films.

The overall result is surely a film that seems divided against itself. On one hand it tries to show Nostradamus as a man of reason and science, yet the very audience it has brought in are those come to see Nostradamus the mystic. The film earnestly wants to do a PR job on Nostradamus, to tell us that Nostradamus was a great thinker, not a crazed mystic, but in so doing the film cheats the audience of the very things they are interested in knowing about.

The cast are of variable success. As Nostradamus, Tcheky Karyo is all driven purpose, but he never engages much – he rarely smiles. There is a far better performance from Julia Ormond, one of the great and undervalued actresses in the world – and she gives the role of Nostradamus’s first wife real strength of character. Also good is Spanish actress Assumpta Serna as the second wife who plays the initial romantic scenes with Tcheky Karyo with an inviting warmth. Some of the casting is definitely odd though – such as cinema’s reigning fruit loop Amanda Plummer totally miscast as Catherine de Medici; or Rutger Hauer who is incomprehensible as a character known as The Mystic Monk, a performance that gives the impression Hauer had thrown away the script altogether.

The director was Roger Christian. Christian began as art director on Star Wars (1977) and Alien (1979), debuted as director with the excellent psi-powers film The Sender (1982), and then went onto make the little seen planetary adventure Starship/Lorca and the Outlaws (1984) and the notorious Battlefield Earth: A Saga of the Year 3000 (2000). Battlefield Earth seemed to sink Roger Christian’s career and it was several years before he returned to the director’s chair with the largely unseen American Daylight (2004) and Bandido (2004), before returning to genre material with Prisoners of the Sun (2013) and Stranded (2013).