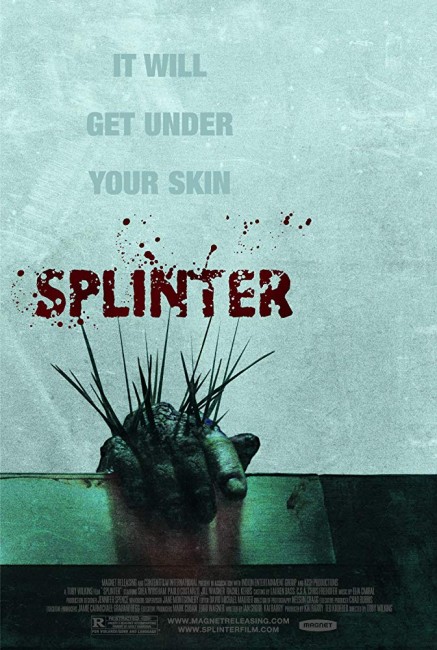 Seth Belzer and Polly Watt have gone camping in the woods for their anniversary. This turns into a disaster as Seth proves unable to erect the tent and so they decide to head for the comfort of a motel instead. On the road, they are held up by escaped convict Dennis Farrill and his drug-addict girlfriend Lacey Belisle whose truck has broken down. Dennis takes them hostage and orders them to drive for the Mexican border. When they stop at a gas station, Lacey is attacked and killed by a man covered in spikes who collapses out of the bathroom. The others take refuge inside the seemingly abandoned gas station. The infection from the other man takes over and resurrects Lacey’s body. Trapped inside the gas station, the others seek a means of escape as the spiked creature tries to force its way in. Meanwhile, Dennis has gotten one of the splinters in his finger and the infection is spreading up his arm.

Splinter was a film that emerged from nowhere with almost all unknowns both behind and in front of the camera, although did attain enough respect to obtain a cinematic release via Mel Gibson’s Icon Entertainment production company. Director Toby Wilkins had previously worked as an Inferno artist at the visual effects company New Wave Entertainment. With the success of Splinter, he was subsequently granted the director’s chair of The Grudge 3 (2009), although has done nothing since then.

Splinter is a stripped-back horror film. Everything extraneous has been pared away until the film works as a string of kinetic suspense effects. There is little explanation of what the infection is – Paulo Costanzo has a line about the surrounding forests being some of the oldest in the world and in the end coda we see further infections on the move in the forest – but nothing is explained any more than that. Little is done to give the central characters any more depth than is needed to carry them through the story – the two couples get about a single scene apiece as lead-in to explain where they are coming from before the drama begins.

Toby Wilkins mounts Splinter like any good out-of-the-blue horror film – Night of the Living Dead (1968), Duel (1971), The Texas Chain Saw Massacre (1974), Jaws (1975) – and propels the protagonists through an abrupt series of jolts as Paulo Costanzo and Jill Wagner are first abducted by Shea Whigham and Rachel Kerbs and then moments later they are forced to take refuge inside the deserted gas station as something takes over and starts moving the attendant and then Rachel Kerbs’ bodies. Amidst this, Wilkins does a superb job of etching a quartet of well-drawn characterisations where all the principals giving fine performances.

Especially good is the way that Toby Wilkins allows the tension to build to unbearable levels once inside the gas station. Shea Whigham heads out to ascertain if Rachel Kerbs’s fallen body is still alive, thinking he can see it twitching, only for the body to come to life and after him, he then shutting her hand in the door in his race to get back inside, severing three of her fingers that scuttle about the room, while outside the body mindlessly batters its head against the glass wall, splattering itself in its efforts.

In a later scene, the state trooper (Laurel Whitsett) comes, only to be snatched up by the thing on the roof and torn in two at the waist; or later scenes with the group hiding inside refrigeration cabinets as the creature rampages through the interior of the gas station. It becomes such that we never know where the next threat is coming from or even what form it is going to take.

Toby Wilkins generates enormous tension out of something as small as trying to hook the trooper’s radio microphone through the window with a coat hanger, only for a possessed hand to start forcing itself up through the slot of the teller’s window, or where Paulo Costanzo must venture out to the cop car by reducing his temperature with ice packs. There is an almost unwatchably nasty scene where the others must sever Shea Whigham’s infected arm using a box cutter, which proves not strong enough to saw through, necessitating that Paulo Costanzo smash the bone with a cement block.

The main complaint that one would have about the otherwise excellent Splinter is that I would have been happy to give it a nod for Best Makeup Effects of 2008 except that Toby Wilkins and his cameraman has shot all of these scenes in shakycam. I am all for keeping monsters hidden in the shadows and little seen but this proves a considerable annoyance as there is no time throughout where we get a solid glimpse of what it is that is attacking the party – we only see an amorphous shadowy lump of spikes lurching about amid camerawork and editing that seems to be conducted by ADD teenagers.