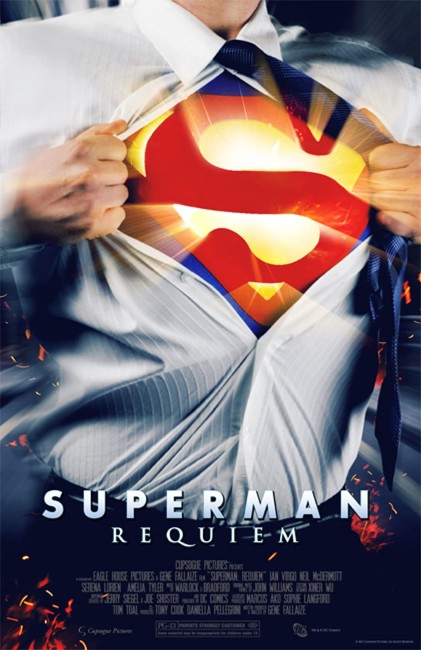 Superman misses Lois Lane who has moved to London with her son. At the Daily Planet, he opens a letter sent by Lex Luthor’s son Alexander announcing that a bomb will be detonated at the gas works. He races there and shields the bomb with his body as it detonates. However, this is a trap and Luthor has placed shards of Kryptonite inside the bomb. When Clark Kent fails to turn up at work, fellow reporter Ali Noels goes to his apartment and is startled to find that he is Superman. He is wounded and the Kryptonite has caused him to lose many of his powers. Ali inspires Clark to maintain the pretence of Superman still being around for the sake of law and order. Luthor then announces that he is going to attack Lois Lane. Clark immediately heads to London to stop this while Ali follows. However, this is a trap set by Luthor who has his henchmen beat and torture Superman to find the whereabouts of the deeds left by his late father.

There a considerable body of fan films made using copyrighted properties, including various Star Wars, Star Trek, Batman and Spider-Man short films, even a whole series of Supergirl fan films. Superman: Requiem is one of these fan films. In this case, it is based on the Christopher Reeve Superman films. It was made by British director Gene Fallazie who shot the film on a $20,000 budget While all of these fan films fall outside of commercial release and are rarely seen beyond YouTube and torrent downloads, Superman: Requiem is one fan film that did attain reasonable attention, was supported by Warner Brothers (even though it was not allowed to earn any profits) and had a gala premiere in London.

The important thing to note is that Superman: Requiem is made as a homage to the first two Christopher Reeve Superman films – Superman (1978) and Superman II (1980) – more so than it is to the comic-book Superman. The opening credits offer a tribute to Reeve and Tom Mankiewicz, a screenwriter who received the credit of ‘creative consultant’ on the Reeve films. The opening replicates the blue credits zooming out at us against a starscape from the first two Superman films. The score has been adapted from John Williams’ score for the films. And when Clark Kent has a photo of Lois Lane on his desk, it is one of Margot Kidder, while the photo of Alexander Luthor’s father is of Gene Hackman as Luthor. There is a visit to the crystalline Fortress of Solitude, which was created by digitally inserting characters into stills from the Reeve films. There is even a replication of specific shots form the originals – like Clark changing into Superman costume in a turnstile door, or the final shot with Superman in orbit. The film even incorporates Bryan Singer’s Superman Returns (2006) as part of its continuity with reference made to Lois Lane’s son. (Although did we really need a reintroduction of the amnesia-inducing kiss, one of the lamest parts about Superman II?)

While this is a tribute to the Superman films, Fallaize does also quote from the comic-books. The character of Daily Planet reporter Cat Grant makes her first screen appearance here. Moreover, the film seems to be trying to incorporate some of the plot from the best-selling comic-book title The Death of Superman (1992-3). There are direct visual quotes from the story with the images of Perry White offering two copies of the Daily Planet with the front page headlines about Superman alive/Superman dead and of the tattered Superman cape raised as a flag, while Martin Richardson spends much of the latter half of the film wearing a black top with the distinctive Superman ‘S’ on it just like the resurrected Superman. There is also the overall plot from The Death of Superman where Superman is wounded and loses many of his powers (as opposed to being killed) before making a long recuperation and return.

My main issue with the film is the casting of Martin Richardson. He is of average height and lacks the taller build that Christopher Reeve had, not to mention is without the muscular physique. Moreover, when he puts the Clark Kent glasses on, he has a thin, oval-shaped face that him more resemble someone auditioning for the title role in Killer Nerd (1991). The scene on a rooftop where Stacy Sobieski convinces Richardson to stand up for himself and maintain the pretence of Superman becomes embarrassing – Richardson’s portrayal of Superman here seems so uncertain and filled with self-doubt, you wonder “Is this really the Man of Steel? The superhero who defends the world from evildoers?” (Sobieski incidentally gives a fine performance and would have made for a good Lois Lane if the film were not being so slavish to the Christopher Reeve films – the character’s name Ali Noels is an anagram of Lois Lane). Equally the scenes where Luthor’s henchmen capture Richardson and take him for a beating makes Superman, a character that should be larger than life, an icon of all heroic aspiration, into a weakling.

One of the biggest issues with the film is that it is a Superman film that goes out of its way to avoid depicting any of his superpowers. What it feels like is back around the time of the Superman (1948) serial or tv’s The Adventures of Superman (1953-8), which couldn’t deliver a comic-book Superman because of lack of budget and effects technology. The film here offers a handy plot device of having Kryptonite cause Superman to lose most of his powers for the duration of the show. The superheroics we do get are low-key ones that avoid visual effects and are more reliant on physical effects and editing like the early scene where we see Martin Richardson appear to rise out of a lake carrying a kid who has fallen in. Particularly shoddy are the opticals in the scene where Superman flies over the gasworks to get to the bomb.