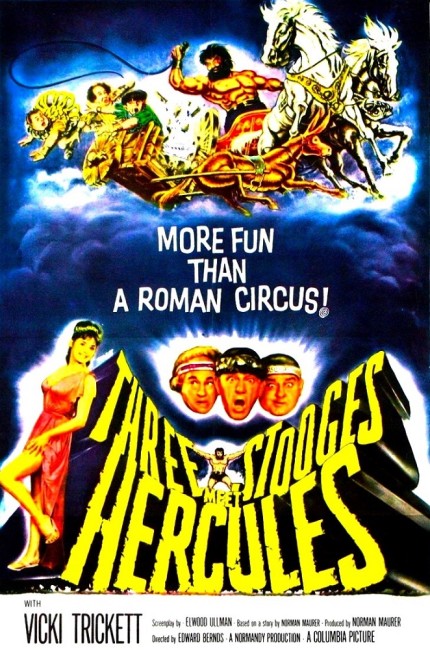 Three idiotic pharmacy assistants, Moe, Larry and Curly Joe, help inventor Schuyler Davis complete his plans for a time machine. They accidentally succeed in transporting themselves, Schuyler and Schuyler’s girlfriend Diane back to Greece around 900 B.C. There they are sentenced to the galleys by the evil King Odius who then announces plans to marry Diane. However, they make an escape. Schuyler, his muscles grown to giant-size by all the rowing, is mistaken for Hercules (a bad-tempered thug in Odius’s employ). They play upon this, pitting Schuyler posing as Hercules against various monsters in the gladiatorial arena and defeating them with Larry’s calm-down pills.

The Three Stooges are very much an acquired taste. Many think their head clonkings and fingers in the eye antics are the height of slapstick, children love them and others find them completely inane. (This author tends towards the latter view).

The Three Stooges, whose compliment varied over the years, emerged out of Vaudeville and found their fame in 190 short films made between 1935 and 1959. They gained a new popularity in the late 1950s and appeared in six feature-length films – Have Rocket — Will Travel (1959), Snow White and the Three Stooges (1961), this, The Three Stooges in Orbit (1962), The Three Stooges Go Around the World in a Daze (1963) and The Outlaws is Coming (1965).

This feature length Stooges effort (never a form The Three Stooges were particularly good at) parodies the cycle of Italian Hercules films that were the height of popularity at the time, following the success of the Steve Reeves Hercules (1958). The international success of the Steve Reeves films saw dozens of Italian muscleman copycat films made. (For a more detailed listing of these see Peplum). The parody here is limited – the film’s most amusing idea is that the ‘real’ Hercules was a thick, bad-tempered thug until a time traveller posing as him inadvertently ended up creating his reputation.

Mostly the humour is down at the level of having a gang of hoods known as Achilles’ Heels. The budget shows through in some of the obvious painted corridor flats and a set of badly unconvincing fake beards that The Stooges grow while galley slaves. Naturally, the film fails to come anywhere near dealing with its time travel theme in an interesting way. Perhaps the most generous that can be said about The Three Stooges Meet Hercules is that is passes its time relatively painlessly.