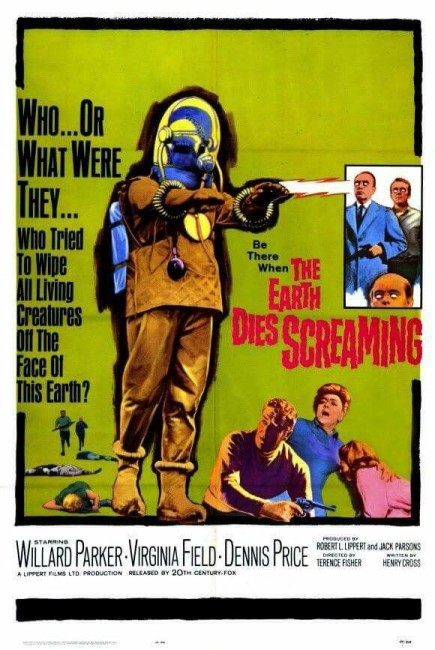 An unknown catastrophe kills people everywhere. One survivor, test pilot Jeff Nolan, arrives in a sleepy English village to find every person dead. He encounters some survivors in the pub and they are joined by various others, seven in all. Jeff determines that all of them were inside something that protected from the air outside and theorises that the rest of the populace was killed by a gas attack. They then see suited figures moving outside and one of the women runs out to get help, only to find that these are robots that promptly eliminate her. The group realise that they are in the midst of an alien invasion. They try to find a means to fight back, while avoiding not only the robots but the dead brought back to life under their command.

Terence Fisher (1904-80) was a cult director. He was one of the key names at Hammer Films and the Anglo-horror cycle of the 1950s. Fisher directed the two films that put Hammer on the map – The Curse of Frankenstein (1957) and Dracula/The Horror of Dracula (1958). Over the next few years, he put out some of Hammer’s finest films – The Hound of the Baskervilles (1959), The Mummy (1959), The Two Faces of Dr Jekyll (1960) and The Curse of the Werewolf (1961), as well as the first of their Frankenstein and Dracula sequels.

In the early 1960s, Fisher became unhappy with Hammer over the handling of his remake of The Phantom of the Opera (1962) and left the studio for a few years to work elsewhere, even heading to West Germany to make a Sherlock Holmes film. He alighted at Lippert Pictures where he made the not particularly funny horror comedy The Horror Of It All (1964). This was then followed by The Earth Dies Screaming, also for Lippert. This became the first in a loose trilogy of science-fiction films that Fisher made during the mid-1960s – the other two being Island of Terror (1966) and Night of the Big Heat (1967), both for Planet Pictures. Evidently, science-fiction was not a good fit for Fisher – his science-fiction ventures, including the trilogy here and earlier Hammer works like Four Sided Triangle (1953) and Spaceways (1953), are usually the least regarded among his films. He subsequently returned to work at Hammer beginning with The Gorgon (1964) and remained there for the rest of his career.

These British alien invasion films displayed marked differences to their US counterparts of the previous decade. The settings were more cosy and rural, usually taking place in a country village and with a sense of it being isolated from the rest of the world. The film here even has the same principal locale as Devil Girl from Mars – the English country pub where a crosscut of people from different walks of society are brought together by the catastrophe. As with most of these other films, the show is headlined by an imported American actor in order to sell the film across the Atlantic – in this case, Willard Parker, a very C-list and today almost completely forgotten name who had appeared in several Westerns during the early 1950s and then became the lead in the tv series Tales of the Texas Rangers (1955-9).

The Earth Dies Screaming draws from the key work of modern British science-fiction – John Wyndham’s novel The Day of the Triffids (1951). Wyndham gave us the idea of placid post-War Britain overturned by a devastating catastrophe (blindness caused by a meteorite) with a handful of unaffected people from all walks of life trying to cope in the aftermath while dealing with a roving menace (ambulatory man-killing plants). The film here changes the basics – a gas attack instead of blindness, killer robots instead of man-eating plants – but uses a near-identical set-up to The Day of the Triffids.

The idea of the deserted city (or village) is also a key one that turns up in other science-fiction films of this period. The Earth Dies Screaming almost feels like a better version of the US-made Target Earth (1954), which had a group of diverse people waking up to find themselves in a deserted city and it patrolled by invading robot monsters. For that matter, you could even go so far as to call this a better version of Robot Monster (1953), which also featured a group of people at siege from an invading alien robot.

The film is a model of economy. Terence Fisher avoids any of the widespread effects-driven destruction in US alien invasion films of the previous decade like The War of the Worlds (1953) or Earth Vs. the Flying Saucers (1956). During the opening scenes, he offers up a montage in which we see a train derailing because of a dead driver at the controls, a car crashing into a brick wall, corpses on railway platforms, a small plane crashing, people lying dead in the streets, which more than effectively gives us the idea of cosy England thrown into chaos.

There is a fine set-up thereafter with the various people gathering amid bared tensions and wondering what is going on. They then see human figures moving through the town in plastic suits only for one woman to run up to them and they turn and reveal they have lightbulb-like helmets with metal faces inside. It’s a great shock moment, although somewhat let down by the cheap animated effect of them touching and killing the woman with an energy blast and the subsequent scenes where their suits are seen crinkling when the move.

What works even better are the appearances later on of the people who have been killed and resurrected as zombies, blindly stumbling through the house with blank white eyes. (The idea of alien invaders resurrecting the dead was a popular theme in this era in films like Invisible Invaders (1959) and Plan 9 from Outer Space (1959), among others). Indeed, Fisher directs these scenes with an expert hand that was not in evidence in any of his other science-fiction trilogy, making The Earth Dies Screaming the one film among these that is definitely worth watching.

The only flaw of the film is its containment within a small English village with half-a-dozen survivors and two robots, while the big climactic struggle to bring down a radio tower seems slightly inadequate when you think that this is supposed to represent the repelling on an entire invasion of the Earth. (If it isn’t worldwide and just localised then why don’t emergency services come rushing to the scene, you keep wondering).