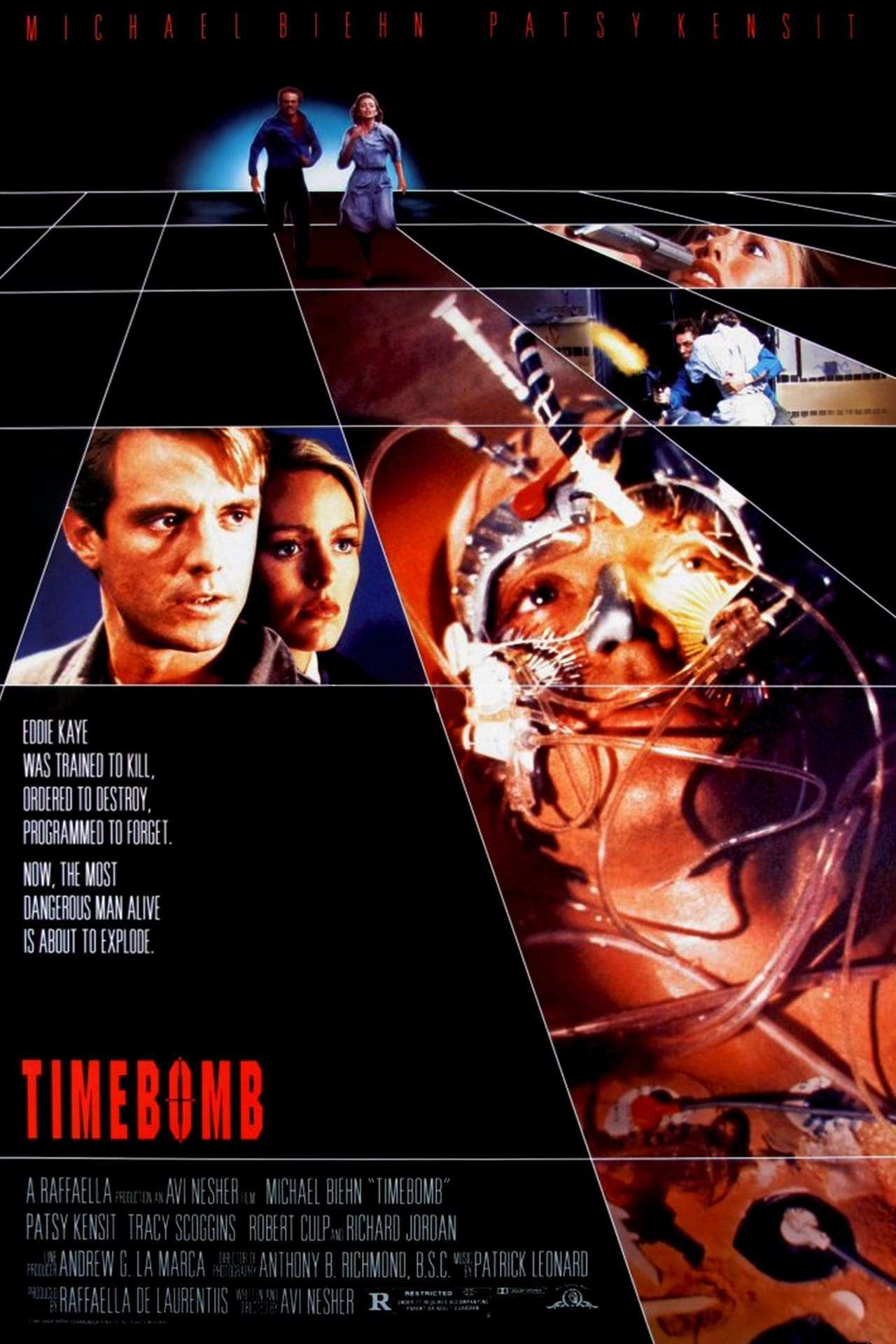 Meek, mild-mannered watchmaker Eddy Kay is featured on the news after he saves a woman and child from a fire. This is seen by covert agency head Colonel Taylor who had believed Eddy, a former top agent, to be dead. Taylor now sees Eddy as a threat to an impending political assassination he has organised and sends killers to eliminate him. In defending himself against his assassins, Eddy discovers he has an alarming proficiency at unarmed combat. He begins to have flashbacks to his previous life as a killer. On the run from Taylor’s men in the company of psychologist Anna Nolmar, he discovers that he was part of an experiment in behavioural modification designed to create the ultimate programmed killer.

While clearly owing its inspiration to Total Recall (1990), Timebomb is a small nevertheless impressive actioner. Director Avi Nesher – who previously made the abysmal She (1983) – claims to been a member of Israeli Special Forces. Ordinarily one would be tempted to dismiss such claims as puffed-up macho braggadocio, however Nesher demonstrates a flair for action that would seem to reveal an intimate knowledge of some training at least – little tricks like where Michael Biehn holds Patsy Kensit prisoner with a gun tied to the back of a chair.

Unlike the action moves of contemporaries such as Stallone, a Van Damme or Seagal, none of the violence in Timebomb is directed to allow its stars to preen for the camera – the people here mean business and intend to do damage to one another. There is a brutality to the fisticuffs and gunplay that is often lacking in many other action films – a scene where Michael Biehn puts a pillow over a man’s head and repeatedly bashes the man with his elbow until the pillow is a bloody mess being one particularly nasty example. Many of the action scenes, like the shootout in the cinema, demonstrate a large-scale flair for action that not unfavourably compare to Nesher’s A-budget contemporaries.

However, the plot is something that defeats Nesher. He sets up the interesting dilemma of a mild-mannered clockmaker suddenly discovering he is a lethal killing machine, something that Michael Biehn enacts quite convincingly – much more so than say Arnold Schwarzenegger with a wiped memory in Total Recall. Unfortunately, Biehn never does find out who he is and Nesher never tells us why his memories were wiped in the first place. We never find out what Biehn is doing in his identity as a clockmaker.

The film leaves hints with flashbacks to a bomb going off and talk about drinking and drug problems but never says anything about why Michael Biehn has no memory of his life as an agent and how it is that he has spent so many years completely unaware of such while in the identity of a mousy clockmaker and why, when rediscovered all of a sudden, he poses a threat to an imminent assassination. It would not seem terribly hard to fabricate an explanation that would give answers but this is seemingly a ball that proves too much for Avi Nesher to carry and he instead falls back on propping the story up with a routine assassination conspiracy plot that answers nothing.

Michael Biehn plays with typical intensely and fairly well; Richard Jordan overacts badly; while the casting of Patsy Kensit as a psychologist is appallingly unconvincing. Kensit perpetually suggests a waif barely out of a British public school – here when she is asked to play a psychologist, who should at the least be in her thirties, she seems woefully out of place. Her British accent also seems to contradict the statement that the character is Hungarian.