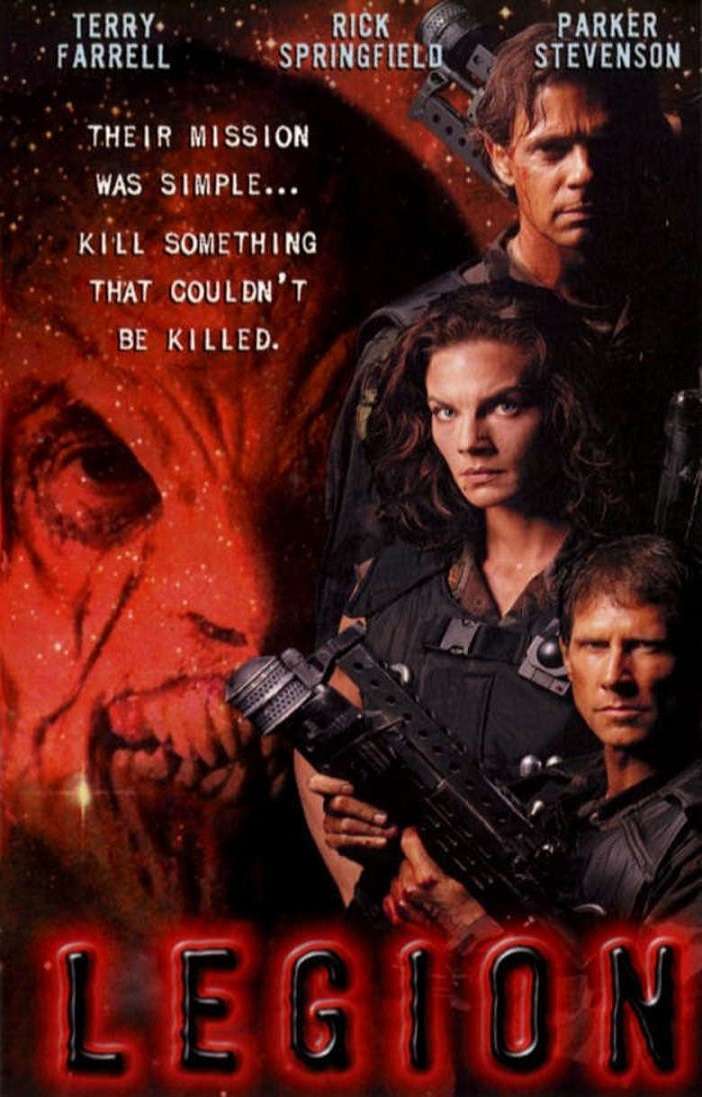 The year 2036 and the world is at war. A group of the nine toughest and most murderous criminals are recruited from a military prison with the offer of a pardon if they will undertake a dangerous mission to capture an enemy recycling plant. Under Major Agatha Doyle, they mount the assault – only to find that the personnel in the plant have all been slaughtered by something non-human. They then realise that whatever killed the others is still there and is now stalking them.

Legion is one of the enterprising sf/action films that have been produced by Mahagonny Pictures, the production company of Israeli-born, American-based director Avi Nesher, best known for films such as She (1983), Timebomb (1991), Doppelganger (1993), Savage (1995) and Ritual (2002). On board are Mahagonny’s two regular scripters – Patrick Highsmith and Evan Spiliotopolous – and director Jon Hess, who previously made Mahagonny’s mediocre Mars (1996), as well as other B-budget films such as Watchers (1988) and Alligator II: The Mutation (1991).

Legion is a variant on Aliens (1986). Conceptually, the film appears to have been pitched as the potentially intriguing idea of The Dirty Dozen (1967) crosshatched with The Thing (1982). It is certainly an ambitiously above-average effort. The budget is somewhat cramped in terms of models and action and the film distinctly down around the B level. However, the film is filled with a series of fine character tensions – in fact, it is these that tend to drive Legion more so than the action element. Intriguingly, the film is crafted as a psychological version Alien (1979) or The Thing of sorts – one where for three-quarters of the running time the agency behind the attacks is kept vague and off-screen. Here Jon Hess manages to admirably achieve some of the paranoia about who or what it is that John Carpenter did in The Thing.

One thing that Mahagonny have managed to bring together here is an intriguing cast. In the lead role is Parker Stevenson, once the teen heartthrob on tv’s The Hardy Boys/Nancy Drew Mysteries (1977-8) who vanished into obscurity after that, before surfacing as a regular on Baywatch (1989-2001). Returning to the screens shortly after his divorce from Kirstie Alley, Stevenson has well and truly discarded teen heartthrob roles and projects a cold, handsome ruthlessness and above all shows he can act. Quite possibly he has a promising career ahead of him as a B action movie star.

Opposite Stevenson is Terry Farrell, who came to prominence as a regular on Star Trek: Deep Space Nine (1992-9). There she came across as assured and glamorous, here though she plays a role more downbeat – a junior commanding officer who comes with sharp, brittle edges. The cast also includes former child star Corey Feldman as a computer geek, singer Rick Springfield and softcore actress Audie England who makes a turnabout from such roles as a medic who is a hardline fundamentalist and comes out with lines like “The Angel of Death is my commanding officer.”