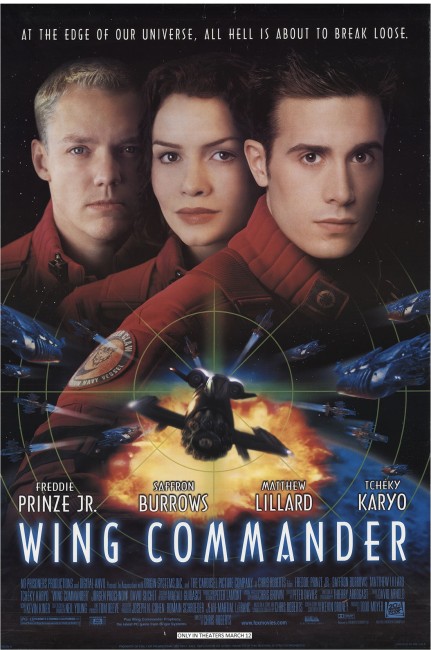 It is the year 2654 and humanity is at war with the alien Kilrathi. Two cadets, Lieutenants Chris Blair and Todd Marshall, are on their way to join the battlecruiser Tiger’s Claw in the Charybdis Nebula. The Kilrathi have just decimated a post in the Pegasus Sector and Admiral Tolwyn entrusts Blair and Marshall with vital information that the Kilrathi are about to attack Earth within a matter of hours. Aboard the Tiger’s Claw, Blair faces prejudice from the other pilots against his being half-Pilgrim, a breed of highly intuitive early star travellers. Blair and Marshall must prove themselves as the Tiger’s Claw faces a Kilrathi advance fleet and is forced to hide in an asteroid belt.

Wing Commander is a film based on the computer game Wing Commander (1990), produced by Origin Systems and designed by Chris Roberts. The game has so far enjoyed some five different follow-ups, as well as various spin-offs. The original Wing Commander was a modest success when it first appeared but the version that went stratospheric was Wing Commander III (1992). It offered what at the time was a quantum leap in videogame technology with the use of live-action video elements integrated into the game environment, which moreover featured well-known actors like Mark Hamill, Malcolm McDowell and John Rhys-Davies. The game has had numerous spinoffs, including an animated tv series Wing Commander Academy (1995), a line of novelizations, a line of action figures and then this live-action feature film.

The Wing Commander film was directed by the game’s creator Chris Roberts. (Roberts had previously directed the live-action film inserts for the games). Most of the elements of the games – the characters of Blair, Maniac and Admiral Tolwyn, the battlecruiser Tiger’s Claw – are still there, although Blair gains the mysterious Pilgrim abilities, something he never had in the games. There are some parts that purists will miss – the rivalry between the Blair and Maniac is muted (although, Matthew Lillard does his best to play up the crazy, cocksure aspect). More crucially, the alien Kilrathi barely even appear throughout and when seen look like generic rubber alien creations, having become much more reptilian and lost the feline appearance they had in the game and animated series.

Expanded out from a combat game into a film, Wing Commander‘s paucity of original ideas only becomes apparent. Much of the film is highly reliant on Star Wars (1977) and it never does anything more than regurgitate the cliches of the genre – the images of tiny ships engaged in dogfights in space, of the youthful hero who wins through an impossible situation by intuitively relying on an inner mystical ability (the Pilgrim abilities never amount to anything more than a routine variant on “Trust you feelings, Luke”), of ships navigating through asteroid belts and gravitational singularities. Wing Commander could be described as a collusion between Star Wars and Top Gun (1986) – an idea that seems so obvious it is a surprise that nobody has tried it before now. When not drawing from Star Wars, the plot is reliant on many of the recruits-in-training cliches and plot elements that Top Gun patented – the championing of a wilfully cocksure anti-authoritarianism; the wild and crazy show-off exploits in fighter planes; the sobering death of a likeable supporting character in action; the hint of romance at the end between the hero and the older, very foxy female commanding officer.

There is no small coincidence that Wing Commander came out only two months before George Lucas reignited the Star Wars franchise with Star Wars Episode I: The Phantom Menace (1999). Wing Commander has the unmistakeable feel of having been timed to capitalize on the audiences that were breathlessly waiting for The Phantom Menace. (Indeed, the film went out into American theatres accompanied by the trailer for The Phantom Menace). Ultimately, all that Wing Commander seems like is a better-budgeted version of one of the numerous Star Wars copies of the early 1980s – see the likes of Battlestar Galactica (1978-9), Starcrash (1978), The Humanoid (1979), The Shape of Things to Come (1979) or Starchaser: The Legend of Orin (1985). Like most of these, Chris Roberts lacks George Lucas’s ability to carve his characters and story out of mythic archetypes on a galactic-scale canvas.

Certainly, the quality of the special effects is excellent – there are some beautiful spatial backgrounds – and the drama of the hiding and the manoeuvring around the asteroid belt is built with a reasonable degree of tension. Although, far too often spatial combat is designed in terms of terrestrial warfare – when the Tiger’s Claw scans the asteroid belt, it absurdly emits sonar pips (a ridiculous concept if it is supposedly a spaceship in a vacuum).

The film also makes the mistake of casting one-dimensional roles with actors like Matthew Lillard and Freddie Prinze Jr. Freddie Prinze Jr, who had about five minutes acclaim as a teen idol, has almost no acting ability outside of his good looks and seems vacant in the role of Blair. Matthew Lillard goes through the casting cliche role he found for himself as a stoner, while the gorgeous British-accented Saffron Burrows is miscast as a tough drill sergeant.

Chris Roberts has not directed any further films subsequent to Wing Commander. Although, in 2002, Roberts did go onto create the Ascendant Pictures production company where he has produced films such as The Punisher (2004), Lord of War (2005), Lucky Number Slevin (2006), Timber Falls (2007), Outlander (2008) and Black Water Transit (2009).

(Nominee for Best Special Effects at this site’s Best of 1999 Awards).