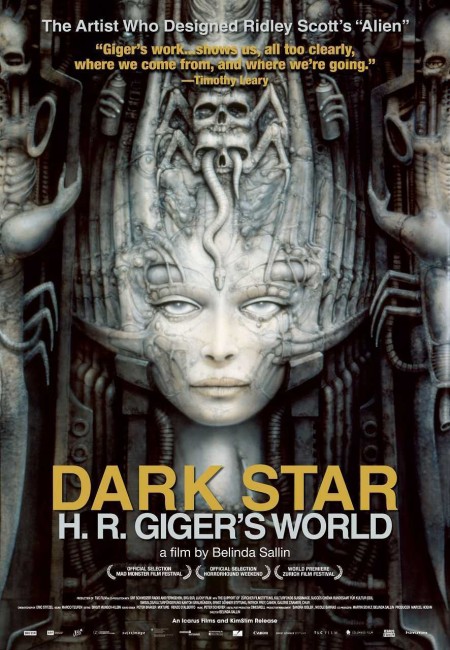 The name H.R. Giger (1940-2014) is almost always one we associate with as the man who created the ground-breaking look of the alien in Alien (1979). Giger had earlier provided designs for Alejandro Jodororsky’s unrealised Dune project – see Jodorowsky’s Dune (2013) – and it all began when Alien screenwriter Dan O’Bannon, who had worked on Dune, gave Ridley Scott a copy of Necronomicon (1977), Giger’s books of collected art, which inspired Scott to hire Giger.

Alien certainly popularised Giger’s name but when you look beyond that, he is a figure who has created an extraordinary body of work. Preferring to work with airbrush but also expanding to sculpture and other media, the Swiss-born Giger created an amazing body of work that fuses machinery and sexuality – something he referred to as ‘bio-mechanoid’ – as well as images of death and the occult. (If you are not familiar with his work, do a Google image search on his name).

His work has featured on album covers, including the celebrated one for Debbie Harry’s Kookoo (1981), as well as a number of heavy metal and industrial groups. There have been three Giger bars around the world. He did work on a couple of other films – Poltergeist II: The Other Side (1986) and Species (1995) and even made a handful of short films of his own – but nothing that caught public attention like Alien.

With Dark Star: H.R. Giger’s World, Swiss documentary-maker Belinda Sallin visits H.R. Giger in his home in Switzerland in 2013. She takes us through the labyrinthine house where every nook and cranny is filled with Giger’s sculptings, artworks, books, even collections of skulls. Almost every surface has been custom-designed in some way to resemble one of his designs. The most amazing feature is a miniature train that Giger has constructed that follows a trail through his garden, the garden shed and in and out of the house where each of the turns and tunnels has been Giger-ised into a dimensional sculpture.

The sad aspect of Dark Star is that it was made when Giger was 73 – indeed, he died shortly after the shooting was completed. Giger gives the appearance that he has had a stroke – his speech is slurred and he seems to phrase words with difficulty. He is infirm and slow in the way he walks and has to be taken through an airport on a wheelchair at one point. It seems a sad portrait, although it should be noted that he has lost none of his ability and is still seen sketching away throughout. Some of archival footage is shown of Giger in his heyday and during the filming of Alien where he seems an intense and darkly driven figure. You wonder how different the film would have been if it had been able to film Giger at the height of his powers rather than here at the end of his life where he seems a frail shadow of what he once used to be.

I am not sure that Dark Star offers any vast insight into H.R. Giger the artist. We get some fascinating tours of his home, the Giger museum and see him at a gallery opening and a signing. There is plenty of his artwork on display throughout. Yet for all that, Giger the man remains a mystery. The question I went in with is what it is that so haunted Giger that he spent his entire life creating these highly eroticised visions of death and excitingly macabre visions of sexuality.

Giger tells some far too brief stories about how he was given a skull as a child, while an anecdote is recounted about how he was scared by a mummy on a visit to a museum and his sister laughed at him so he went back over and over again to conquer the fear. Giger also ventures to talk about how his girlfriend Li Tobler suffered depression and committed suicide in 1975 – there is brief reflection on how she was a central image to his work then and how his art became a way of coping after.

Other than this, there is not much discussion about the forces that drove Giger. Even beyond that, there is surprisingly little in the way of analysis of Giger’s art – discussion about his importance and neglect by the establishment from a Swiss gallery owner and that is it. The upshot of the film, most of which is spent showing the infirm Giger pottering about his home and the various business dealings associated with his work, seems to be merely to tell us that, despite the extraordinary visions he conjured forth, Giger was just a fairly ordinary person.